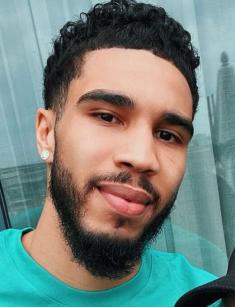 Jayson Tatum is a professional basketball player for the NBA team Boston Celtics. He is viewed as one of the top players in the Association. During the 2022 NBA championship, Tatum led the way with 26 points, which allowed the team to reach the Finals.

He was born on March, 3, 1998 in St. Louis, United States. Jayson's parents are Justin Tatum and Brandy Cole. His father is a basketball coach and his mother is an attorney. They both were very young and not married when Jayson was born.

The future star has been interested in basketball since childhood. His father often told him that his height was perfect for the game, and this encouraged the boy to play.

He studied at an independent school for boys where he was one of the best players. After finishing high school in 2016, Jayson joined Duke University. In the beginning, Tatum injured his foot and missed several games. During his first match, he scored 10 points and led the team to a win over Maine. In the following months, Jayson performed well and led Duke to victories over Georgia Tech, Miami, Wake Forest, and others. In his first season, he played in 29 matches and averaged 16.8 points.

In 2017, Tatum took part in the Association's draft and signed a contract with the Boston Celtics. He became a small forward along with Jaylen Brown and Justin Jackson. His first tournaments were a success. One of the highlights was their match against the Nicks where Jayson scored 24 points. They finished the season entering the 2018 playoffs. Tatum played a major role in many of his team's victories. In 2020, his contract was extended.

In 2022, the Celtics lost the Finals to the Warriors. Tatum was guarded tightly by Andrew Wiggins and scored only 13 points.

In 2014-2015, Jayson participated in FIBA World Championships. In 2016, he represented the USA at an international game sponsored by Nike. The player also took part in the 2020 Summer Olympics and helped win the gold medal.

Jayson and his ex-girlfriend Toriah Lachell have a son who was born in 2017. In 2020, he started dating Ella Mai, a British singer. There are rumors that she is already his wife.

One of Tatum's back tattoos has several verses from the Bible. As a reminder of how his career started, he tattooed his old jerseys on his left calf. The Duke #0 jersey represents the Duke Blue Devils. In 2020-2022, Nike created Air Jordan shoes exclusively for him.