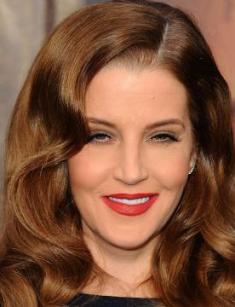 Lisa Marie Presley is an American singer and the daughter of the rock’n’roll king Elvis Presley. She used to be married to Michael Jackson and Nicolas Cage.

The would-be celebrity was born on February 1, 1968, in Memphis. The famous singer Elvis Presley and the actress Priscilla Presley became her parents. The young people met in Western Germany when the musician was doing his military service; Priscilla was 14 while Elvis was ten years older.

The lovers married in 1967. The young wife was trying to make a family with the star for two years. However, she did not want to be a housewife and spent time at noisy parties or building her acting career rather than caring about the family. The first conflicts began several months before Lisa Marie’s birth. Soon, Elvis and Priscilla divorced.

Studying was a challenge for Lisa: she did not want to stick to rules and changed schools in the middle of a school year. The parents did not pay much attention to the daughter and put her in Los Angeles boarding schools that kept expelling her.

The woman used to have issues with drugs, including cocaine; it was the primary reason for her expelling. The parents did not have much choice and sent Lisa Marie to the World Literacy Crusade supported by the Church of Scientology. John Travolta introduced Priscilla to the organization administration. This school helped Lisa Marie get rid of her addiction.

Lisa Marie Presley followed in her parents’ footsteps and presented the debuting album To Whom It May Concern in 2003. It was successful and achieved the fifth position in Billboard 200. The singer not only performed the songs but also wrote them. The album presentation was marked with an official concert in Great Britain.

The music video to the first single “Lights Out” was also created; the premiere took place in February 2003. Presley invited Francis Lawrence to collaborate. Another video, “Sinking In”, was filmed in New York.

Lisa Marie’s path was not cloudless. She recorded ten songs for the next album, Now What, in 2005 and earned more fame; her tracks turned into hits, and the album got into Billboard. The director Patrick Holt created the video for the cover song “Dirty Laundry”. George Michael had a short appearance there. Presley and Holt had another collaboration: the video “Idiot” for the song from the second album.

A still period followed. Lisa Marie’s worldview changed, and she presented the album Storm & Grace in 2012; T Bone Burnett who had won several Grammys and Oscar contributed to this work. Music experts started talking about Lisa Marie Presley as a music painter, not a pop singer.

The celebrity collaborates with many songwriters, DJs, and singers. She recorded the singles for NBC Holiday Collection and Sounds of the Season with Michael Bublé, Kylie Minogue, Bonnie Wright, and Coldplay. 2006 brought the documentary about the frontman of the rock group Ramones; Presley participated there along with other musicians.

The memories about the father did not leave Lisa Marie, and she recorded the “duet” song with Elvis using computer technologies. The track came out by the 20th anniversary of the artist’s death; the music video followed. In addition to the man’s original vocal, his daughter’s voice and new music instruments were inserted.

The bright and charismatic woman has attracted many show-business figures. Lisa Marie has been married several times. The musician Danny Keough became her first husband in 1988; two kids, Riley and Benjamin, were born in this union.

Keough and Presley are on friendly terms now. As the woman confessed, their relationship improved after the official divorce; they collaborate today. The daughter Riley followed in her grandmother’s footsteps and became an actress.

20 days after the divorce, Lisa Marie celebrated the wedding with Michael Jackson, whom she had met at the age of seven, in 1975. They kept in touch from that time.

The young woman helped the singer recover after numerous accusations; Presley believed that her lover could not have done anything terrible. Jackson was dependent on the singer. They divorced a year and a half later.

The relationship with the actor Nicolas Cage was short-term. The artists fell in love quickly and married in 2002 in Hawaii, but the happiness did not last long: they split up 108 days after the wedding ceremony.

Today, the musician and her children live in Los Angeles. Lisa Marie is going to write an autobiography and talk about her relationship with her parents, kids, men, and career.

Elvis’s daughter is an active charity activist: she manages her father’s fund that had been established in 1984. Lisa Marie supports homeless families and helps children get educated and find shelter. The Presley fund also provides scholarships for talented students.

Summer 2017 was marked with Lisa Marie’s official announcement: she was a drug and alcohol abuser. However, she said she did not want to end up like her father and started a treatment course. Not long before that, Presley and Lockwood were involved in a scandal: the inappropriate recordings with Lisa Marie’s small children were revealed. As a result, the girls were put under Priscilla Presley’s care; they came back to their mother in October of the same year.

Lisa Marie Presley’s net worth is estimated at $16 million in 2019.