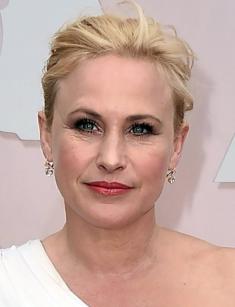 Patricia Arquette's biography seems concourse of favorable circumstances, which gave an excellent result together with hard work and talent. For thirty years, the attractive American actress has worked her way from a teenager playing bit parts to the winner of prestigious awards.

Patricia Arquette was born on April 8, 1968, in Chicago. Her mother, Brenda Olivia "Mardi" (née Nowak), is a Jewish actress and poetess from Poland. Her father, Lewis Michael Arquette, was a Muslim actor and screenwriter. Her grandfather Cliff Arquette was a comedian, also known as Charley Weaver. Patricia's siblings did not break the family tradition and from an early age showed interest in acting.

At the age of 15, the oldest daughter, Rosanna Lisa Arquette, went on a hitchhiking journey through America. When she was 17 years old, the girl already played bit parts. It was Rosanna who supported her younger sister Patricia when the fifteen-year-old teenager also left home to start independent living. The brothers Richmond, Robert and David also starred in movies. Robert had a sex change and became Alexis.

Patricia said in an interview that she studied in a Catholic school and for all her life has taken a serious attitude towards religion. The actress even hesitated before agreeing to the role of atheist Frankie Paige in the film Stigmata. Her acting skills, talent, and a bright appearance helped the 17-year-old girl to land roles in three projects at once. In 1987, she simultaneously starred in A Nightmare on Elm Street 3: Dream Warriors, Daddy and the comedy Pretty Smart.

The actress’s filmography consists of more than fifty films. Since the early 1990s, Arquette has become a recognizable actress. For five years, she portrayed the wife of a Nobel Prize Winner and a femme fatale, played several supporting roles, before she landed the leading role in the thriller Stigmata. Although the horror film did not win recognition of critics, it was a box office success.

On the contrary, the psychedelic film Lost Highway attracted the interest of critics. Reviewers tried to find in the movie a hidden, symbolic meaning, and most of them succeeded. Arquette said that the collaboration with director David Lynch was one of the most difficult in her career. After psychologically disturbing roles in thrillers, the actress wanted to play a comedic part to relax and laugh.

Patricia rose to prominence after the leading role in the fantasy series Medium. Her character, Allison DuBois, works at the Phoenix Prosecutor’s Office and dreams of murder and kidnapping victims. For this film in 2005, the actress first won the prestigious Primetime Emmy Awards for Outstanding Lead Actress in a Drama Series.

In 2014, the film Boyhood was released. It is interesting that the story of the boy’s growing-up was filmed for twelve years and its plot changed over time. Arquette won a lot of awards for the role of Olivia Evans, the mother of the title character.

At the Academy Awards ceremony, Patricia delivered a traditional Oscar speech and raised a serious issue. The actress appealed to women in the United States to fight for equal rights and wage equality in the film industry.

During her acting career, Patricia Arquette has appeared in nude scenes several times (e.g., Human Nature (2001)). Her first naked pictures were from the movie True Romance (1993) when she was 25 years old. There are also numerous photos on the Internet where she is topless with bare boobs.

The result of the collaboration with musician Paul Rossi in the film Beyond Rangoon was the birth of the son, Enzo Rossi, in 1988. The pretty blonde was surrounded by flattering admirers on the set. According to rumors, in 1992 and 1993 on the set of True Romance Patricia won the favor of Christian Slater, and in 1994, Matthew McConaughey.

The most persistent suitor was Nicolas Cage. In 1989, he fell in love with the actress at first sight. Despite all his deeds in the name of love, Patricia fled before the wedding. But in 1995, the rejected bridegroom could finally marry the intractable lady and become her husband. The couple co-starred in the film Bringing Out the Dead. The marriage had been on the verge of breaking up several times before they divorced in 2001.

In 2002, Patricia became engaged to a colleague, Thomas Jane. During the engagement, the woman gave birth to a daughter, Harlow Olivia Calliope. In 2006, in Venice, the parents of the girl celebrated the wedding, and in 2011 they separated. They agreed to joint custody of the daughter who periodically became involved in scandals.

According to the latest information, now the actress has a close relationship with artist Eric White. Patricia considers the fact that she became a single mother at the age of 20 to be one of the secrets of her career success. According to her, children motivate parents to work and earn money.

The actress actively expresses a public stance on Twitter. Arquette is fighting for the rights of women and the poor in the USA, urging people not to follow the rules imposed by society blindly. The actress is 5.11 ft. (156 cm) tall, weighing 143.3 lbs. (65 kg), and does not go on extreme diets. She also does not plan to do plastic surgery, preferring natural aging.

However, omniscient journalists claim that Patricia wears a large 36D bra size thanks to the plastic surgeons and breast implants. The personal life of the movie star is constantly in the public eye. So, in 2015, the photo appeared on Instagram depicting the actress’s jeans sagging dangerously low as she emerged from her car with her hands full.

Patricia remains a member of the Arquette family, who in 2016 lost Alexis, who died of AIDS. In 2017, son Augustus Alexis, Patricia's nephew, was born in the family of David Arquette.

On November 18, 2017, Patricia became the victim of an Internet death hoax. The news about her sudden death spread on social media. However, the rumors were refuted almost immediately. People who believe in omens claim that such stories are a sign of a long life.

In 2017, the actress starred in the comedy Permanent about the life of teenagers, as well as in the drama The Bell Jar, which was announced to premiere in 2018.

In 2018, the woman also portrayed Tilly Mitchell in the Showtime miniseries Escape at Dannemora.

Patricia Arquette has a net worth of $24 million.