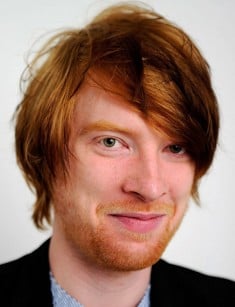 Domhnall Gleeson was born in Dublin, the capital of Ireland. His father Brendon Gleeson is a famous British actor. His mother Mary Gleeson is a housewife and brings up 4 children. Domhnall is the eldest son in the family. He has three younger brothers – Fergus, Brian, and Ryari.

Domhnall Gleeson attended Malahide Community School in the suburbs of Dublin. Later he was studying at Dublin Technological Institute during 4 years, from which he graduated with the Bachelor of Arts in 2004.

At first, Domhnall wanted to realize himself as a scriptwriter, but he had no success in it. Though later he wrote scripts for TV film and “Immaturity as an act of charity” and another one for a short movie “Norin”, in which he appeared as a film director.

Then he had an experience as a dramatic artist. He was very successful in this sphere. Gleeson took part in a great number of stage productions. In 2006 he was even nominated for the Tony Awards for the major part in the stage production “The Lieutenant of Inishmore”.

Domhnall Gleeson made his film debut in 2004.Though it was just a short movie “Six Shooter”, but the actor appeared in the major part. A year later he starred in the short-length movie “Stars”, in the horror comedy for teenagers “Boy eats girls”. He also took part in three episodes of Irish comedy TV series “The Last Furlong”. In 2006 he took part together with his father in the feature movie “Studs”.

After a three-year break because of the theater tour, the actor returns again to the movie set. He plays secondary roles in the drama “A Dog year”, in the crime comedy “Perrier's Bounty” and takes part in the shooting of two short movies “Velvet” and “What Will Survive of Us”.

The next year 2010 was much more favorable and fruitful. At the beginning, he took part in the episodes of the dystopian romance “Never Let Me Go” and in the western “True Grit”. Later he acted the major part of the TV movie “When Harvey met Bob”, for which he received the Awards from Alliance of independent cinema and television.

At the end of 2010, the first part of the screen adaptation of Harry Potter and the Deathly Hallows by Joann Rowling was released. In this film, Domhnall Gleeson played a part of Bill Weasley, beaten by the werewolf. In this picture he worked together with his father again, his father took the part of the Alastor “Mad-Eye” Moody. Moreover, he took part in the final part of Harry Potter.

And he played a role of Constantin Levin in the screen adaptation of the famous novel by Leo Tolstoy“Anna Karenina”. He received Irish cinema and TV Awards for this part.

In 2013 he played the major part of the time traveler Tim Leik in the romantic melodrama “About time” and appeared in the TV series “Back soon” in the popular British TV series “Black Mirror”.

In 2014 Gleeson played the main part in the comedy “Frank”, for which he received Irish cinema and TV Awards and also played secondary roles in the war drama “Unbroken”. His last heroes are the following, secondary part in the historical drama “Brooklyn”, major part in science-fiction “Ex Machina”, in thriller “The Revenant”, and also part in cult-favorite saga “Star Wars: The Force Awakens”, in which Domhnall Gleeson played the part of one of the

Commandants of the “First order” of the commander Hacks.

Though Domhnall Gleeson is 32 years already, he was never married. Also, he keeps his romantic relations out of the public eye, though some of them become a public fare. So, it became known, that he had a love affair with the actress Rachel McAdams, who was his partner in the movie “About time”. Now actor dates Irish producer Juliette Bonas.

Domhnall Gleeson together with his father shares love of the English Championship “Aston Villa”. He tries not to miss their matches and he considers the 19th of April, 2015 which is the team's FA Cup semi-final win over Liverpool one of the greatest days in his life. 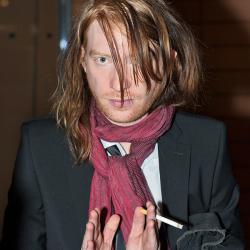