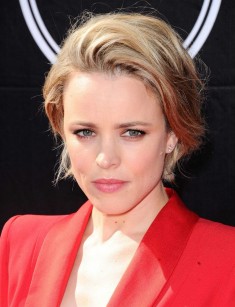 Rachel McAdams is a Hollywood actress of Canadian origin. She became famous after her roles in a scandalous comedy "Mean Girls", melodrama "The Notebook", comedies "Wedding Crashers" and "Morning Glory" and also a screen-adaptation of "Sherlock Holmes" directed by Guy Ritchie where she appeared in the role of a fatal seductive character Irene Adler.

Rachel was praised by "MTV Movie Awards" for three times: she won two nominations for her role in the picture "Mean Girls" and one for "The Notebook". Moreover, she was nominated for Academic Awards for Best Actress in Supporting role but unfortunately, she didn't receive the cherished statuette.

Rachel McAdams was born in the south-west of Canadian province Ontario in a small town - London. Her parents sent a 3-year girl to the sporting school where Rachel studied ice-skating. It was expected that Rachel would grow up and become a famous figure skater.

Later, in the family of the truck driver Lance and a nurse Sandra two babies were born – their son Daniel and a daughter Kaylin.

Rachel practiced the sport with pleasure but when she was 12 years old there was an event that changed her plans at once. During her holidays McAdams took part in the amateur play on the stage of the summer theatrical camp, where she was having her rest.

Rachel McAdams turned out to be a natural-born actress. At that time the girl even received the awards of the Regional Theater Festival. Since that moment figure skating took the second place in her life, however, Rachel continued to practice sport till her majority.

Since then a future actress combined her studies with acting in the theatre group.

Having finished school McAdams became a student at York University in Toronto, where she studied acting. In 2001 a girl graduated with a Bachelor of Fine Arts honors degree because she was actively shooting for experimental short-length movies.

A licensed actress went to Los Angeles where she was offered a job. Rachel McAdams began her acting career with the supporting roles in the series "Shotgun Love Dolls" and "The Famous Jett Jackson". In a year actress was involved in the movie "My Name is Tanino".

Rachel McAdams became really famous in 2004 when she appeared on the screens in the movie "Mean Girls" directed by Mark S. Waters. The comedy had a tremendous success and rather high grosses which exceeded the budget of the project. The actress was nominated for MTV Awards for Female Breakthrough Performance.

The same year a young woman filmed in the dramatic movie "The Notebook", which was highly appreciated by critics and the audience.

In 2006 McAdams took a short break and didn’t appear on the screen for a year. Her first movie after a time-out was "The Lucky Ones". In this picture, Rachel worked together with an Oscar-winning actor Tim Robbins and Molly Hagan.

The same year actress took part in the fantastic movie "The Time Traveler's Wife" and a gripping picture "State of Play". During her last shootings, Rachel was invited to act in the picture of Guy Ritchie "Sherlock Holmes".

No doubt, that her performance in the movie "Midnight in Paris" directed by Woody Allen was a real breakout. The movie of the famous director was destined to be successful. "Midnight in Paris" opened the Cannes Film Festival. McAdams acted the character of temperamental Inez, moreover, Allan wrote this role especially for the actress. A tremendous success and Screen Actors Guild Award meant the highest appreciation of the Canadian actress’s talent.

Next year McAdams together with Channing Tatum appeared in the American-Brazilian romantic movie "The Vow". Actors represented the couple who was trying to restore their relations after an awful car accident. A melodrama "To the Wonder" is another one picture, released in 2012. These two movies in which McAdams performed the leading roles were nominated for the Golden Lion Award at Venice Film Festival.

Nominations and memorable projects played into the hands of the actress: almost in all of the following movies, Rachel got leading roles and the longest possible screen time.

In 2013 a fantastic melodrama "About Time" featuring Rachel McAdams in the leading role came on the screen.

The year 2014 brought actress new roles in European movies. Rachel played a role of the mother, whose child was killed in a drama "Every Thing Will Be Fine". This movie was produced by German, Canadian and Norwegian film crew. Also, Rachel acted a character of the lawyer in an espionage thriller "Wanted" of German, British and American production.

The picture under the working title "Wanted" was released in Russia under the title "The most dangerous man" because the latter title had already been mentioned. Thriller was filmed by the book of John le Carré and told about activities of German counter-intelligence and problems which were brought to Europe by the refugees.

In 2015 actress played a role in the sporting thriller "Southpaw". The leading role of the boxer, who lost everything, was performed by Jake Gyllenhaal. The same year Rachel appeared in the series "True Detective" as the character of Ventura County Sheriff and beginning from the 9th episode she played the leading role in the events of the whole season.

Since 2005 till 2007 McAdams was in relations with the actor, Ryan Gosling. Young people got acquainted on the movie set of "The Notebook". But something cracked in their relationship and they couldn’t cure it and in 2008 the actors separated.

After that actress dated Josh Lucas but their relations didn’t last for a long time.

From 2010 till 2013 Rachel had a love affair with Michael Sheen. The couple met each other on the movie set of "Midnight in Paris". But this romantic relationship also came to an end.

By hearsay, Rachel is single at the moment. The actress spends all her free time in Toronto. McAdams is a convinced vegetarian and practices yoga. Sport and proper nutrition have a good influence on the star’s figure: McAdams weighs 50 kilos being 163 cm high.

An actress is fond of gardening near her house and really gets pleasure from this hobby, she takes an active part in the Environmental Defense Funds' activities. McAdams founded GreenIsSexy website dedicated to environmental problems.

An actress doesn't have an official Instagram. Accounts registered under the name of Rachel McAdams are just fan-groups which post commonly available photos. There are up to 60 thousand followers in such groups.

At the end of 2015, a biographical drama "Spotlight" came on the screen all over the world. In Russia, the film was premiered in February 2016. This drama is based on real events: there was an anonymous letter in which clergymen were accused of pedophilia and after journalists began to investigate the case and it was turned out that the priests up to the bishop got mixed up in it. The picture received controversial feedbacks because of its scandalous and complex topic.

In autumn of 2016, the fans saw McAdams in the screen-adaptation of the comics "Doctor Strange". In this fantastic action movie from Marvel Studios the leading roles were played by Benedict Cumberbatch, Tilda Swinton, Chiwetel Ejiofor and Mads Mikkelsen.

In 2017 Rachel got back to the character of Irene Adler. The premiere of the third movie about the adventures of Sherlock Holmes is set for the year 2018. 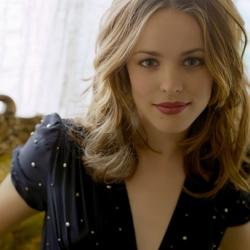