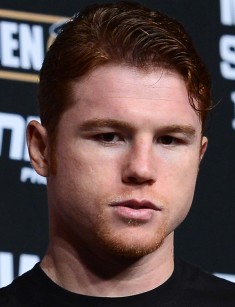 Santos Saul Alvarez Barragan is a professional boxer from Mexico, a world champion in two weight classes: the first and middleweight.

Alvarez was born on July 18, 1990 in Guadalajara, Mexico. Saul has a sister. At the age of 13, the boy became interested in boxing. The young man had 20 fights, twice became the winner of the Championship of Mexico. When Saul was 14 years old, he took the second place and in a year he won gold.

In 2005, Saul moved to the category of professionals and in first two fights knocked out his opponents. In 2006, Alvarez had a fight against a newcomer Miguel Vazquez, whom Saul won in four rounds. Six months later, in a competition with Jorge Arce, there was a draw. In 2008, at the tournament with Gabriel Martinez, he won in the 12th round after his opponent refused to continue the fight. Saul received the WBA Fedecentro belt in the welterweight division.

In mid-2008, Alvarez was again ahead of Miguel Vazquez on the points according to the judges. In the fight against Antonio Fitch, which took place in early 2009, he knocked out the opponent and received the title of NABF in the middleweight category. In the second tournament of the year, he defeated the athlete from Latin America Euri Gonzalez. The boxer received the title of WBO Latino. In the next fight against Michel Rosales, Saul again knocked out the opponent.

In summer, 2009, Alvarez won the WBC Junior Welterweight title. At the age of 20, Saul became the silver WBC world champion in the first middleweight category after knocking out Luciano Leonel Cuello from Argentina. In the next fight, Alvarez confirmed the title, winning Carlos Manuel Baldomir, the former world champion. The opponent was knocked out in the sixth round. In the fight against the former holder of the world title Lovemore N'dou from Australia, Alvarez won by the number of points.

When Alvarez was 21 years old he fought against Matthew Hatton. Raul defeated him and got the WBC title in the first middleweight division. In order to defend the title, he fought with Ryan Rhodes, Alfonso Gomez and Kermit Cintron. The Mexican knocked his opponent out.

In 2012, there was a battle with the boxer from America Shane Mosley, the famous champion of three weight classes. Saul's work was estimated at $2 million, and Mosley – at only $600 thousand. Alvarez met the expectations of his fans and showed amazing fight. Saul did not give the opponent a minute to relax.

Six months later, there was a tournament against Josesito Lopez. Alvarez got $ 2 million. His reward was 10 times bigger than his opponent's. Lopez, like Mosley, was completely under control of the Mexican, and the 5###sup/sup### round was finished with Saul's victory. After the fight with Austin Trout, whom Alvarez defeated on points, the Mexican boxer got two champion titles: WBC and WBA.

The first defeat in the sports biography of Alvarez was in September, 2013 in a battle against Floyd Mayweather. The ticket office of the tournament was $ 150 million, which at that time was a record. Mayweather defeated Alvarez.

The American was more experienced boxer. Floyd began his professional career nine years before Saul. At the end of the fight, two judges voted for the American, the third announced a draw. The next time Alvarez went to the ring only in November 2015 during the fight against Miguel Cotto. The fight without intrigues lasted 12 rounds, after which Alvarez got the title of the winner.

Saul Alvarez is popular among girls. He looks not like a typical Mexican. Saul has a white skin and red hair. He got a nickname "Canelo". Canelo had relations with the Colombian model Barbara Turbay and the actress Kate del Castillo.

In 2016, the boxer began to appear with the unknown girl. The journalists soon found out the name of Alvarez’s girl: her name is Fernanda Gomez. The girl was born in Mexico City and met Alvarez through his promoter Oscar De La Hoya. The couple had relations for almost a year.

After that, the place of Fernanda was taken by Shannon de Lima - the ex-wife of Jennifer Lopez’s ex-husband Marc Anthony. At the same time, the Mexican media reported that the athlete’s ex-girlfriend was pregnant. In the press, there are also rumors that Alvarez has a daughter.

Lima and Saul for a long time did not tell about their relationship. The young people only posted photos on Alvarez's personal page on Instagram. Officially, the boxer confirmed their relationship only at the press conference dedicated to the upcoming fight with Gennady Golovkin, which took place in summer, 2017.

Such behavior of the young people was influenced by the fact that under the previous marriage contract, Lima is not allowed to marry within three years after the divorce. Otherwise, she will lose a monthly payment of $ 10 thousand from her ex-husband.

In May, 2016, Alvarez had a fight against the British boxer Amir Khan. At the beginning of the tournament, the advantage remained on the side of the Englishman because of his speed. But soon the sportsman made some mistakes and came close to the Mexican. Few minutes were enough for Alvarez to knock the enemy out. After that Amir was hospitalized.

After the battle with Khan, there was announced a fight with Gennady Golovkin from Kazakhstan. But since Alvarez did not like artificial deadlines, the boxer had to give up the title of WBC champion. The Golden Boy Promotions negotiated with representatives of Golovkin for a year. And finally, the date of the tournament was set on September 16, 2017. According to Oscar De La Hoya, the battle is going to be the best tournament of the century. Both sportsmen prepare for the fight.

In May, 2017 in Las Vegas, Alvarez had a fight against Julio Cesar Chavez, in which Saul won. The video of the last battle is posted on YouTube.

• Second place in the championship of Mexico - 2004

• First place in the championship of Mexico - 2005 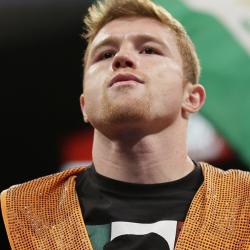