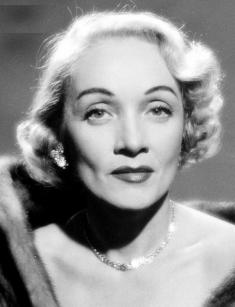 There are actresses, who get on in the role well. There are those who please the eye of more than one generation of viewers. And there are rare individuals, who change the very idea of the screen image and force the women around the world to imitate their style, manners, gait, gestures... One of these phenomena was the German and American actress Marlene Dietrich. But this amazing woman had a strong influence on the world of fashion and women's consciousness. Dietrich appeared before the audience as a cocktail of different qualities: she was both unapproachable and seductive; innocent and vicious; feminine and yet masculine. And everything was without a gram of vulgarity.

Marlene was born in a suburb of Berlin called Schöneberg. Her father was a police lieutenant Louis Erich Otto Dietrich and her mother, Wilhelmina Elisabeth Josephine, although she came from a wealthy family of burgers, she was forced to settle as a housekeeper in a wealthy house. The girl was born exactly one year after her elder sister Elisabeth. An important event in the biography of Marlene Dietrich was the departure of her father from the family. It happened when the girl was six years old and he died a year later. She didn't remember her father but she associated with him the manifestation drama: young Marlene «played daddy" as both a daughter and the head of the family. The mother was famous for her harshness.

Dietrich was interested in music at school. She learned to play the lute and took up the violin later and first appeared in public in 1917. After the First World War, Germany was devastated and devastated. The mother of Marlene decided that the proximity of the capital under such conditions can be dangerous for a young daughter, so she sent her to a boarding school in Weimar. The future movie star spent there four years, improving her play the violin. At the age of 21, Marie Dietrich got her first job: she was accepted to the orchestra at the cinema. She and the other musicians should voice the show of silent films. But Marlene worked there only a month: the musicians stared at her much more than the notes, so they often strayed. But she wanted to become an actress, watching various films.

She gets a job as a dancer and singer in a cabaret and also goes to study in the acting school. First, the studio didn't want to work with her but the stubborn young woman went to the well-known actress and her recommendations helped her. Dietrich is involved in a variety of performances after the course and started her successful film career. After the first success, Marlena goes to America and gets citizenship of the United States.

It is interesting that when Adolf Hitler came to power, the government asked the actress to return and even offers phenomenal fees for each film of Marlene Dietrich, filmed at home. But the star not only refuses but also supports the troops of Germany's opponents during the Second World War. She stopped filming for a few years and went to concerts in the garrisons and hospitals, giving about half a thousand performances. As witnesses recalled, Marlene, like ordinary soldiers, slept in the trenches, washed with melted snow, had pneumonia and suffered from annoying lice regularly. This act of actress and singer was perceived as a feat, so at the end of the war, she was awarded Dietrich the Medal of Freedom for her work.

Marlene Dietrich's filmography had two dozen films when she appeared in La cravate. This work was not remarkable but the director Josef von Sternberg and called the actress to play a main role in the musical Der blaue Engel. And this movie turned Marlene into a world star. The film was created the same way, which decades later will be associated with the audience with the name Dietrich. After the phenomenal success of the German film, the actress signs a long-term contract with the studio Paramount Pictures and goes to America.

The following six projects in the filmography of Marlene Dietrich filmed by the same director Sternberg. Among them is the melodrama The Song of Songs and the family history Blonde Venus. But some of Sternberg's films received bad criticism, he was accused of cheap scenery for the drama Shanghai Express and ridiculous ideas of the spy film Dishonored. And only the game of the main actress collected the full halls of cinemas. Therefore, after the tragicomedy, The Devil is a Woman Dietrich ceased to cooperate with the director, who made her famous all over the world.

Nevertheless, Marlene continues to star a lot. The first color films The Garden of Allah, the thriller Knight Without Armour, Destry Rides Again, the comedy The Lady Is Willing and many others started to appear. Dietrich tries to move away from the image she created at the beginning of her career. It is not always successful but the audience does not want to accept the "new" style of the icon.

The actress had great success in the film adaptation of the novel Witness for the Prosecution by Agatha Christie. She was nominated for the Oscars in several categories. And it was Marlene Dietrich's last main role. Then she starred in several projects but she did not appear in the movies after the episode in the drama Schöner Gigolo, armer Gigolo with David Bowie, where Marlene also performs a vocal role.

The girl began to learn singing in the acting school with one of the best teachers in Berlin. She performed hits from on the stage in the cabaret and made her first studio recordings in 1928. The songs of Marlene Dietrich had some success, although the singer's voice was not very strong, she was inherent musicality and a harsh contralto of the actress fascinated listeners. Most people noted the sincerity in Dietrich's voice.

The most popular songs of Marlene Dietrich contaminants in albums and were published in full-length phonographs. Her hits were recognized as the best songs of the year, such as "Lili Marleen," "Falling in Love Again," "Song of Songs," "Laziest Gal In Town" and many others.

The actress had an episodic role of the mistress of the Chairman of the court in the film Tragödie der Liebe but this movie changed the personal life of Marlene Dietrich. She became close to the administrator Rudolf Sieber and she had an affair with him, although the man was already engaged. Soon they were married and the couple had a daughter Maria in 1924, the only child of Dietrich. By the way, the world learned about Marlene's daughter as a gifted actress named Maria Riva.

According to Dietrich, her marriage to Sieber was more like a funny anecdote than family life. There was no longer intimacy between them after the birth of her daughter and the couple separated and began to live their lives a couple of years later. They did not draw up a divorce and the actress was considered married woman until 1976, until the death of Rudolf at the same time. However, it is well known that Marlene Dietrich's personal life was always turbulent.

Such actors as Jean Gabin, John Wayne, Jimmy Stewart, John Gilbert, the director Douglas Fairbanks Jr., the singer Maurice Chevalier, the director Josef von Sternberg, the businessman Joseph Kennedy – the father of the president John Kennedy. Marlene's affair with writers Erich Maria Remarque and Ernest Hemingway were very loud. The first of them brought the image of the actress from the novel Arc de Triomphe and the second is famous for being the only love of the actress, who remained the platonic one. Their long-term correspondence was published as a book later.

Dietrich was raised in a very religious family but lost her faith during the Second World War. As she rode through the garrisons and watched the pain, the fear and the horror, she uttered a phrase that became winged: "If God exists, he must reconsider his plans." Marlene loved the movie and she was very proud of her contribution to the art. She kept stage costumes carefully, paintings and photographs. She rented a special cell in the bank, where there were about 25 thousand items and almost 20 thousand photographs. Today these things are exhibits of the Museum of Film and Television Berlin.

In 1975, the actress had an accident, after which she ended her career. Dietrich retired to her Parisian apartment and stopped all communication with the outside world. Marlene was allowed only a small number of select visitors. The woman devoted herself to writing the book of memoirs Marlene Dietrich's ABC, which was published in 1979. She had a net worth of $10 million.

The legendary actress was bedridden by a broken hip for the previous 13 years. The injury was not serious but Dietrich refused hospitalization and medical assistance. Her kidneys began to fail because of her supine position and alcohol abuse, which was the cause of Marlene Dietrich's death on May 6, 1992. Many thousands of fans came to give a tribute. Her coffin was covered with American and French flags and was transported to her native town of Schöneberg. Dietrich`s grave was near her mother.

There many written books and many documentaries in memory of one of the greatest movie stars. But the most valuable is the movie Marlene, which was released during the life of the actress in 1982. This work is an audio interview that Dietrich gives to the film's director. The sound is superimposed on the video chronicle of the early years of Dietrich, as she refused to appear on the screen in the form in which she was in her recent years.