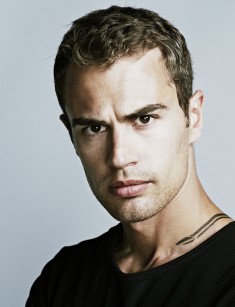 Theo James is a British film actor, the star of the films Underworld: Awakening, Divergent and London Fields. He is also known as a musician, the singer of pop-rock bands Makora and Shere Khan.

The actor was born in the famous English city of Oxford. He was the fifth and youngest child in the family of business consultant Philip Taptiklis and his wife Jane Martin, who worked for the National Health Service.

Theodore studied well in a prestigious private school, and he was good at humanitarian subjects. The teenager played basketball in his spare time, he was fond of hip-hop and communication with friends. They called themselves "Crew".

After graduation, Theo James entered the University of Nottingham, where he earned a degree in Philosophy. During his studies and after it, the young man worked as a barman, bodyguard, and a health worker.

The guy who actually planned to become either a writer or a musician, suddenly realized that acting gave him many more opportunities for self-realization. Soon after graduating, Theodore Taptiklis shortened the first name, used the third name as the surname and went to castings. He makes his debut in the theater in the play Star of Tomorrow, but rather quickly he was offered a role in the television series.

For the first time, Theo James appeared on the screen in the melodrama A Passionate Woman. He also played the role of the dead Turk in one of the series of the popular series Downton Abbey and the image of guy Ray in Woody Allen’s comedy You Will Meet a Tall Dark Stranger.

He had more significant roles in horror film Bedlam and fantasy action movie Underworld: Awakening. By the way, Theo specially studied parkour, also learned knife and whips skills for the sake of the role of the vampire David in the fourth part of this franchise.

In 2013, the television series Golden Boy was released, where Theo played the main role of detective Walter Clark. James spent several weeks training at the New York Police Department to understand the work of his character. However, the movie had only modest success and after the first season, it was closed.

However, Theo James was not embarrassed, because he actually did not have free time because of a new invitation. The same year 2013, the actor signed a contract to shoot in the screen version of the books by Veronica Roth under the general title Divergent. The success of the blockbuster led to the decision to continue work on screen versions, and viewers could again see James in the role of Tobias "Four" Eaton in the following parts Insurgent, Allegiant, and Ascendant.

Actor’s admirers should pay attention to his other projects. He has recently played in the comedy War on Everyone, the criminal detective thriller London Fields and the historical saga about Ireland The Secret Scripture.

Before Theo James became an actor, he tried himself as a musician. A young man mastered the art of playing the piano, guitar, harmonica, and saxophone. In addition, he managed to become a singer of the English pop band Makora thanks to his beautiful baritone vocals.

Later Theodore and his friends organized their own band, which was named after the tiger Shere Khan from Rudyard Kipling's The Jungle Book. The guys sang only the original songs: “Footsteps”, “Dust”, “No Sense”, “Distance”, “Straight Up” and many others.

The band performed on the stages of London clubs, and Theo James performed as a guitarist and main singer. Unfortunately, at the end of November 2012, Shere Khan announced through the social network Facebook that they were stopping their activities.

Theo James is one of the most reserved artists. He does not have personal pages on social networks, the actor has never confirmed any romantic relationship. It became known that he had a love affair with a classmate Ruth Kearney at the Theatre School, although the couple did not tell about their relationship.

After the release of the film Divergent, the fans started talking about the relationship between Theo James and Shailene Woodley. The reason for this was an ambiguous phrase of the actors that there was a connection between them, which positively affected the work. However, even this affair, if it existed at all, turned out to be secret.

In 2015, the ubiquitous paparazzi "caught" Theo James in a jewelry store with Ruth Kearney. Young people looked at the window display with rings. But the actor remained true to himself and did not comment on his personal life. Although people who have close connections with Ruth Kearney, talk about their engagement.

Many people successfully speak foreign languages and some are even polyglots. Although Theo James knows only English, he flawlessly reproduces not only the British accent but also the pronunciation of Americans, Scots, Australians, and Irish. And it can even mislead the indigenous population. Theo completely refuses to use the British accent even in backstage life while playing in American films, thus, merging into the local dialect.

The man is very athletic. He loves diving and set a personal record. He has dived 18 meters in one breath. Theo also loves jumping from cliffs and high rocks, boxing and playing football. Like most Englishmen, James has a favorite club in the Premier League. He likes the Arsenal Football Club.

During his studies at the Theater School, Theodore mastered the art of dance and since then he can tap dance, he has mastered the skill of classical choreography and jazz-modern. It is worth saying that the actor is a fan of Harrison Ford and especially his films about the adventures of Indiana Jones. By the way, Theo James is considered one of the most beautiful actors in the UK. 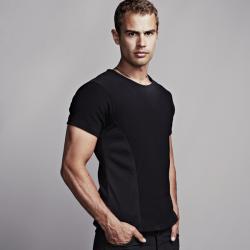