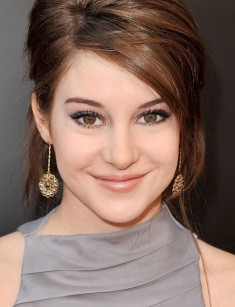 Shailene Woodley is an American film actress who became famous thanks to her participation in the television series "The Secret Life of the American Teenager," as well as such films as "The Descendants," "The Fault in Our Stars," and "Divergent."

Shailene was born in Simi Valley, California. Her parents worked at the school. Her father, Lonnie Woodley was a principal, and her mother Lori Victor-Woodley worked as a psychologist. Shailene has a younger brother Tanner Woodley. The guy also wanted to become an actor but starred only in two films.

When Sheila was 15 years old, her parents divorced. Psychological stress caused the disease: just at the same time, the girl was diagnosed with scoliosis. To straighten the spine, the girl wore a medical corset. Also, Woodley wore braces on her teeth.

In such a situation, Shailene had to go to an unfamiliar class, to high school. It's no surprise that earlier a quiet girl suddenly became a rebel. But this protest was not associated with alcohol, drugs or bad behavior, as it often happens. Woodley became an ardent defender of the environment. She visited rallies and meetings of activists.

After school, Shailene planned to enter New York University and to become an architect and interior designer. But just at that time, the girl was offered a role in the television project. Woodley appeared on the screen from the age of five as a model in commercials, then as an actress. So she realized what to expect on the set, and agreed.

Nevertheless, the actress still claims that cinema is only a hobby for her and a way of expressing her character. Shailene says that as soon as she realizes that she turns shooting into a business, she will immediately leave the cinema.

The creative biography of the actress began early. For the first time, Shailene Woodley appeared on the screen at the age of 8, playing a little girl in the melodrama "Replacing Dad." Then the actress starred in various serials. Once she even played the main role in the historical family movie "Felicity: An American Girl Adventure."

Until 2008, when Shailene was invited to play Amy Juergens in the youth series "The Secret Life of the American Teenager," the girl did not take the profession of an actress seriously. In this multi-series film, Woodley played for five years and every year participated in the nominations of national and international film awards. During her career, the film actress was nominated 69 times and won 26 awards.

The next famous work of Shailene was the role of Alexandra King in the comedy melodrama "The Descendants." Then there was the romantic comedy "The Spectacular Now," the thriller "White Bird in a Blizzard," and the psychological drama "The Fault in Our Stars." Woodley starred in the sequel "The Amazing Spider-Man," but all the scenes with Mary Jane Watson were cut out.

Shailene Woodley appeared in several parts of the science fiction thriller "Divergent," where the actress played the title role of Tris. The fantastic film by Neil Burger was successful at the box office. The first part brought $ 288 million.

In 2014, the actress starred in the comedy "The Fault in Our Stars," where she played a girl who has cancer. At a weekly cancer patient support group, a sick girl Hazel met a young man Augustus (Ansel Elgort), with whom she began a romantic relationship. Lovers tried to forget about the problems and went on a journey around the world.

In 2016, the thriller "Snowden" by Oliver Stone was released. And again the main female role went to Shailene Woodley. Joseph Gordon-Levitt played the role of a scandalous programmer.

There are a lot of rumors about the personal life of Shailene Woodley. At different times, the fans put together the names of the actress and Daren Kagasoff, with whom she worked in the series "The Secret Life of the American Teenager," with Miles Teller from "The Spectacular Now", with Ansel Elgort, her partner in the drama "The Fault in Our Stars."

After the release of the thriller "White Bird in a Blizzard," there were rumors that Shailene was dating Shiloh Fernandez, and after the "Divergent" - with Theo James.

The most curious thing is that Woodley was just friends with all these men. The actress didn’t have relations with them. The girl was dating the rock musician Nahko Bear for a long time. Shailene admitted in an interview that the man changed her views on life. However, since the fall of 2015, young people spent less and less time together, and at the end of winter 2016, they announced their breakup.

The actress loves extreme sports, for example, skydiving or bungee jumping. The actress spends her free time fighting for the environment. She also helps to promote homeopathic medicine.

In 2016, the actress participated in an action against the construction of the Dakota Access oil pipeline. The rally took place in the Morton district, North Dakota, USA. Woodley was arrested. The girl was accused of illegally entering the private territory of the corporation. The actress recorded everything in Facebook Live.

Shortly after the arrest, the protesters were released. However, in early 2017, the actress appeared before the court, where Shailene was accused of violating public order. The actress was sentenced to a year of probation.

This incident did not prevent the development of the cinematographic career of the actress. In 2017, Shailene signed a contract and appeared in the second season of the HBO rating series “Big Little Lies,” in which Zoë Kravitz and Laura Dern, Nicole Kidman and Reese Witherspoon starred. Also, the role of the mother of the murdered maniac Perry Wright, Mary Louise, was written for Meryl Streep.

The personal life of the Hollywood actress is rather busy. In the summer of 2017, Woodley began to appear with a man whose face was hidden from the camera. But the reporters found out the identity of Shailene’s boyfriend. It was a rugby player from New Zealand, a member of the North Harbor Club and the national team of Fiji, Ben Volavola. They met in New Zealand, where Shailene Woodley starred in one of the movies. In autumn, the couple decided not to hide their relations, regularly appearing in public places.

In early 2018, there was the first official trailer for the film "Adrift," in which Shailene Woodley played the main role. Her partner was the British actor Sam Claflin, who starred in "Me Before You." The young couple met in Tahiti and went on a romantic trip on a sea yacht. But the ship got into a powerful hurricane.

Now the actress is preparing to star in a fantastic animated film by Australian director Luke Jurevicius. The project is called Arkie. This film will be Shailene’s debut in voicing. 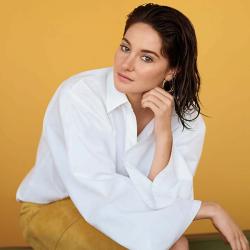