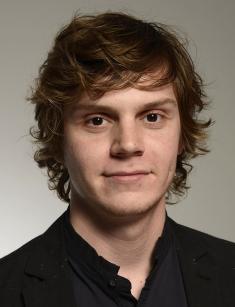 Evan Thomas Peters is a young talented actor famous for the TV series American Horror Story and the movies X-Men: Days of Future Past and X-Men: Apocalypse.

Evan Peters was born in St. Louis, Missouri, on January 20, 1987. He has a brother, Andrew, and a sister, Michelle. Evan’s father, Phil Peter, was the vice president of Charles Stewart Mott Foundation that fought for the civil rights of Eastern-European people. The boy’s mother, Julie, brought up the children and kept the house. Initially, the family lived in St. Louis but moved to Michigan later.

The charming ginger-haired boy took part in various competitions and conquered the hearts of his teachers; he achieved a lot. Evan dreamed of acting from early childhood; the parents supported their son. As a teenager, Peters joined a modeling school and studied drama.

The young man participated in a competition in Florida and won many victories. These achievements made him feel confident: he had chosen the right path. One day, a professional photographer noticed Evan and recommended him to a Los Angeles agent who promoted promising young artists. Thus, the would-be star gained the opportunity to try himself in cinematography.

At the age of, Evan and his mother moved to Los Angeles, one of the international movie centers. The young man frequented auditions and runways. In 2002, he started working on TV series; his roles were small and episodical. Peters was practicing a lot until he mastered his skills.

In 2001, the creators of American Horror Story paid attention to the artist. The horror show implied that actors should have several roles; it was a piece of luck for Peters.

In 2004, Evan gained the first lead role of Adam Sheppard in the movie Clipping Adam. It was a breakthrough moment. The project brought the actor Phoenix Film Festival – Best Breakthrough Performance. In 2004-2005, he personified Seth Wosmer in the series Phil of the Future. It was the brilliant debut that promised further success.

After the victory, Evan received many invitations to various projects; he appeared in dramas, comedies, detectives, and action movies. Although Peters is young, he is popular all over the globe and has numerous fans.

American Horror Story not only made the actor famous but also changed his personal life. While Taissa Farmiga played his girlfriend in the series, another actress, Emma Roberts, became the man’s lover in real life. Emma is the daughter of the action movie celebrity Eric Roberts. She played the bitchy starlet capable of telekinesis.

The couple started dating in 2012. The next year, in summer, the actors’ heated arguing evolved into a fight. It happened in a hotel in Montreal; neighbors who witnessed the scandal called the police. Evan was injured: Emma bit him and broke his nose; she was arrested for a while.

Before New Year, Peters proposed to his girlfriend and gave her a ring; Emma said yes. The actors were engaged in March 2013 in London, but there was no wedding. In June 2015, Evan and Emma split up to make amends in October.

Today, the actor’s personal life has not changed. Since 2016, Evan and Emma are together again, although their relationship is quite rocky: they see each other, break up, make scenes, and reunite. There are permanent rumors about the actors’ wedding.

By now, the actor has participated in more than 40 movies; sometimes, he appears in commercials. Evan Peters is an active user of various social networks. More than 4 million people follow his Instagram page.