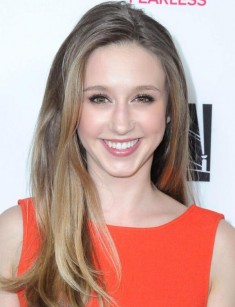 Taissa Farmiga is an American actress of Ukrainian descent. Over the past few years, the actress managed to make a name thanks to her participation in the films The Final Girls, American Horror Story and 6 Years.

Taissa was born and spent her childhood in Whitehouse Station, New Jersey. Taissa’s father, Michael Farmiga, worked as a systems analyst, and her mother, Lubomyra Spas, works as a school teacher. No one should be surprised at their Slavic names because the grandparents of the future actress came to the USA from Ukraine. The mother was born in America, but the father was born in Chernivtsi Oblast.

Taissa's family has many children. The girl was the seventh youngest child. The girl enjoyed attending secondary school, but after the fourth grade, the mother decided that it would be better for the daughter to leave the school. Since there was not enough money for a private school, Farmiga was homeschooled.

In addition to liberal arts, Lubomyra Spas taught the daughter her native language. Besides, the actress has repeatedly visited the country of her ancestors, where she got acquainted with the Ukrainian folk culture. The girl admits that the actress is fluent in Ukrainian, although she speaks worse than she understands oral and written speech.

Like most of her siblings, Taissa wanted to choose a profession related to social service. The girl did not think about the career of an actress. But the only star in the family, famous actress Vera Farmiga (an Oscar nominee), insisted that her younger sister take part in her debut directorial work. After receiving the first experience, Taissa considered the beginning to be successful and decided to continue an acting career.

The first film with Taissa Farmiga was the melodrama Higher Ground where she played teenage Corinne Walker, the title character.

Then the young actress starred in the mystical series American Horror Story. It is interesting that, in the first season of this series, the actress played one role, and later portrayed another character.

In total, Taissa Farmiga played in American Horror Story for five years and during this time she performed three different characters: Violet Harmon, Zoe Benson, and Sophie Green. It is typical for this series, which the authors marked down as an anthology series. Each season has a separate name, plot, and characters, not related to the previous ones.

The first season Murder House tells about the life of the Harmon family, who change their place of residence to help the couple to solve relationship problems. The actress plays the couple's daughter, a reserved girl who suffers from a lack of attention from parents. The family settles in the haunted house, and Violet begins dating a sociopathic teenager with homicidal mania (Evan Peters). Subsequently, it turns out that the girl has fallen in love with a ghost.

Next time the actress appeared in the third season of the series, entitled Coven, and she was a part of the main cast again. The plot of this season tells about the witch clan. Young witches get together in New Orleans. The girls are taught to defend themselves against hostile people in a special school. The actress’s heroine, witch Zoe Benson, also comes to these gatherings, but unlike other young witches, Zoe has a secret that the girl does not want to share with the clan.

Then the actress appeared as a guest celebrity in the series only in the sixth season entitled Roanoke. A feature of this series was the fact that the season is depicted as a movie in a film. The series shows a paranormal documentary entitled My Roanoke Nightmare and tells about actors who reenact a married couple when they move to a haunted house.

Taissa made a breakthrough in the career in 2013. She appeared as a title character in the thriller Mindscape and then starred with Emma Watson in the crime drama The Bling Ring which premiered at the 66th Cannes Film Festival. The plot of the film shows a real-life story and is based on the article "The Suspects Wore Louboutins" by Nancy Jo Sales about a gang of teenage robbers who stole the valuables from celebrities’ houses.

At the same time, the young woman worked on the same set with her sister Vera in the light comedy At Middleton.

More exciting movies with the participation of Farmiga were released in 2015. The action movie Wicked City and the black comedy The Final Girls are worth mentioning too. In the first film, the actress was a part of the main cast and received the role of a reporter.

The main film of 2015 was one of the best works in Taissa’s filmography. It was the melodrama 6 Years, where she, along with Ben Rosenfield, portrayed a loving couple who faced difficult events.

Although initially, Taissa Farmiga did not want to become a film actress, now the young woman is pursuing her career. Her free time activities also focus on developing the necessary skills. Taissa reads a lot to improve memory and plays sports to keep her body fit. She especially likes snowboarding.

As for the romantic relationship, Farmiga does not want to start serious relations, and she has not had any significant love affairs. The girl dated Evan Peters, her colleague in the TV series American Horror Story, but she prefers to live on her own for the last few years.

The actress has a verified Instagram account, where she shares happy moments of her free life with 1,5 million subscribers.

The actress has proven that she can play diverse roles and does not want to be associated with one character or genre. Moreover, the 2016 film In a Valley of Violence with brilliant John Travolta in a leading role belongs to the unfashionable Western genre. The film tells about revenge. One tramp is eager to revenge the death of a friend, and many people are involved in this conflict.

The actress also voices cartoons. In 2016, Taissa Farmiga voiced a full-length cartoon about the superheroes Justice League vs. Teen Titans, and Teen Titans: The Judas Contract in 2017.

In 2017, it was reported that Taissa Farmiga agreed to play a leading female role in the horror film The Nun, the spin-off of the movie The Conjuring 2 and Annabelle: Creation. The creators have set July 2018 as a premiere date.

The film was shot in Romania, and some scenes were filmed in the famous Transylvania.

The plot of the film centers on the demonic monster Valak. Viewers liked him in the horror film The Conjuring 2. The story begins when a young nun commits suicide in a secluded Romanian monastery. A priest and a novice are sent to investigate this incident, and gradually realize that a demon controls the monastery, and this place is filled with cursed souls.

The actress also began shooting in the mystery thriller We Have Always Lived in the Castle. The film shows a family of hermits, consisting of two sisters and a sick uncle. The family is hiding in the castle from the gossip which appeared after other relatives died mysteriously. 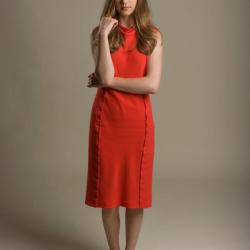