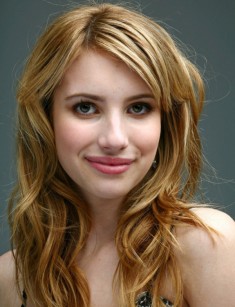 Emma Rose Roberts was born in the star family in 1991 in Rhinebeck that is located in the State of New York. First of all, she is the niece of Hollywood actress Julia Roberts. Her father is also famous actor Eric Roberts. Emma’s mother Kelly Cunningham was the model and actress.

Emma Roberts’s parents broke up when the daughter was a few months. A scandalous divorce suit began, in which Eric Roberts divested his ex-wife and the daughter of a roof over their head. Emma’s star aunt Julia Roberts took care of the little niece and former sister-in-law. She bought relatives the house and defended Kelly Cunningham from the ex-husband and Julia’s brother Eric. The latter started the trial relating to custody of the daughter. Kelly managed to defend the right of the daughter with the help of Julia. Later Julia Roberts was taking care of the niece.

Emma Roberts has watched the movies with her beloved aunt from an early childhood. Inspired by her talent, the girl from an early age participated in the auditions and was often on the set, where Julia Roberts took her.

The young actress got a debut role and started her cinematic biography in 2001 when she was just 9 years old. Emma played the daughter of the main character in the film Blow. But the girl could watch the film only when she turned 18 because the tape was “for adults”. The good daughter’s start influenced her mother to give Emma in Los Angeles at the Archer school, where the young actress had the opportunity to learn and to film further.

In Los Angeles, Emma Roberts continued to play in movies. In 2002, she was offered a part in two projects Grand Champion and Spymate. The girl played the sister of the main character in the first movie. In the second she also got a bright and visible role of former secret agent Muggins’s daughter. Both films were very warmly received by the audience, and a young actress got a lot of compliments from critics.

But the real fame came to Emma Roberts when she was 13 years old. She became the star of the hit teen sitcom Unfabulous. The girl played the main role of teenager Addie Singer in this sitcom. When it appeared on the screen, Emma became so popular that the producers of the project have decided to continue it. The 2nd season was soon released, and then the 3rd one. The sitcom about the life of teenagers was broadcast on the Nickelodeon channel from 2004 to 2007.

It is noteworthy that Emma Roberts could reveal another of her talent in music during participation in this series. According to the plot, Addie Singer composed and sang her own songs, accompanying on guitar. Emma coped with this task and demonstrated her outstanding musical abilities. In 2005 Emma Roberts’s debut album titled “Unfabulous and More” was released. All songs of the TV sitcom Unfabulous were recorded there. Soon, the artist recorded the soundtrack for the Disney project Ice Princess. Emma Roberts was twice nominated for a Young Artist Award for participation in the series.

Girl’s bright appearance that looks very like her famous aunt, let her start a modeling career. In 2006 Emma Roberts was invited as a model by the Dooney & Bourke company. Three years later, Emma was invited to become the face of cosmetic brand Neutrogena.

In 2006, Emma Roberts starred in the film Aquamarine. Young actresses Sara Paxton and Joanna Levesque starred together with Emma. The next year saw the release of the film Nancy Drew. In this movie, Emma played the main character Nancy, who liked to unravel detective stories. This film has grossed a considerable sum. It brought to its creators more than $ 7 million for the first weekend after its release.

Hard work on the set and the popularity in movies turned the life of the young actress into a constant shooting. That is why Emma Roberts had to turn to home education after the 8th grade. When she wasn’t filming, she was taught by private teachers.

In 2009, the film Hotel for Dogs was released on the screen. The film became immediately the box office hit and grossed 114 million dollars. After it, the army of Emma Roberts’s fans increased. The actress had the opportunity to choose roles and projects she liked because then she had no opportunity to agree to all offers. So Emma Roberts starred in the hit movie Wild Child, where she played a rebellious teenager, who had to study in a private English school by fate. Immediately after Wild Child, she starred in Lymelife. In the movie, Emma Roberts’s partner was Alec Baldwin. The movie was shown at the Toronto International festival in 2008 and allowed the young actress to take place in the top 10 most valuable actors in Hollywood.

In 2010, Emma Roberts’s dream came true. She played together with her star aunt Julia in the romantic comedy film Valentine’s Day.

Film critics think that The Winning Season and Twelve are the most famous and bright Emma Roberts’s movies of recent years. Emma Roberts was nominated by Teen Choice Award for the last movie. Emma Roberts’s very notable work was the main role in the sequel to the famous horror film Scream 4.

The young beauty woman dated with a colleague, Alex Pettyfer for a while. They met and played together in the comedy Wild Child. Sometime later she was already associated with well-known skateboarder Ryan Sheckler. But this short-term romance ended, and it was replaced by a romantic relationship with actor Chord Overstreet. However, it did not work out too.

In 2012 Emma Roberts was first seen in the company of actor Evan Peters. They starred together in the TV series American Horror Story. This love story was marked by scandal in 2013. Emma, who has apparently derived hot temper from her star father, broke Evan’s nose during a quarrel. The girl was even arrested for the use of force. Since Peters did not raise a claim, the story ended peacefully.

Moreover, at the end of 2013, the tabloids wrote that the young man asked Emma to marry him. The engagement took place in early 2014. But in the summer of 2015, it became known that Emma Roberts and Evan Peters brock up. According to them, the reason for this was very tight shooting schedule. 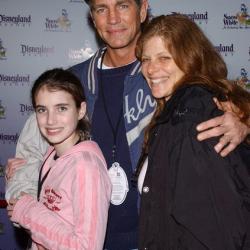