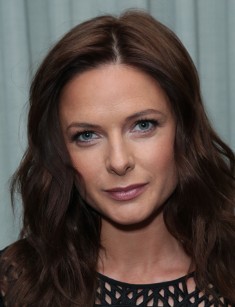 Rebecca Louisa Ferguson Sundström was born on October 19, 1983, in Stockholm. Her British mother had moved to Sweden when she was 25; there, she met the man who would become her daughter’s father. When Rebecca was small, the parents divorced. The six-year-old girl attended an English-speaking school; two years later, she transferred to a public school. From 13, the would-be actress worked as a model, advertised clothes, and collaborated with local magazines. As a student, Ferguson took an interest in music and went to the Adolf Fredrik's Music School; she graduated in 1999.

The 18-year-old Swedish actress lived in Miami, US, for a year: she participated in movies and learned surfing and diving.

The next year, Rebecca got serious about learning history and religion; this hobby helped her when she starred in historical projects. As the actress achieved success on the Swedish television, she decided to pay more attention to her private life: Rebecca and her boyfriend moved to Simrishamn, the south coast of Sweden. Ferguson devoted herself to her son, started working as an administrator in the Argentine tango studio, and appeared in short-length movies.

The teenage actress debuted in the melodramatic series Nya Tider (New Times) aired by TV4 when she was 15. Rebecca played the lead part of Anna Gripenhielm. The series came out in 1999 and was popular at first, but the ratings of the news seasons were decreasing. In 2006, the channel administration closed the project. However, it brought Rebecca Ferguson popularity in her home country: she had her fans, and there were many new offers. With all these accomplishments, the actress took her time before she decided to choose the acting career.

In 2002, the melodrama Ocean Ave was released; the young woman played Chrissy Eriksson and appeared in several episodes. As the American studio took part in making the series, Ferguson moved to the United States for a year to continue to work on the project.

In 2004, the actress participated in the Swedish horror Drowning Ghost where she played one of the main characters. Critics did not welcome Mikael Håfström’s new project: they believed it was too much like the American movies Halloween and Friday the 13th. In spite of this, the movie won several awards for the best director and best soundtrack at the Screamfest Los Angeles Horror Film Festival.

At that time, Rebecca decided to pay more attention to her family life; she moved to the countryside where journalists did not bother her. The actress took part in short movies created by local directors; Puls and Irresistible were the most notable works.

In 2008, Ferguson came back to the TV screen: she starred in an episode of the series Wallander.

In 2011, the director Richard Hobert noticed the actress in a supermarket and offered her the role in the full-time movie A One-Way Trip to Antibes which turned out to be Rebecca’s road-opener in the world of cinematography.

The talented actress was noticed in London; she was invited to the auditions for the historical series The White Queen. When the woman arrived, her task was to play two scenes in front of the whole crew including the actor Max Irons who had taken the lead part. At that time, Ferguson was hardly acquainted with her character: she knew nothing but the fact that it was a young and strong person who became a queen and widowed soon.

Eventually, Rebecca gained the role and played Elizabeth Woodville, the spouse of Edward IV of England. The premiere of the series took place in 2013 on BBC One. Both critics and ordinary people welcomed the movie enthusiastically. The whole world was speaking about Rebecca Ferguson; she was nominated for the prestigious Golden Globe Award for Best Supporting Actress – Series, Miniseries, or Television Film.

In 2013, Rebecca had the new offer from Hollywood: Brett Ratner’s screen adaptation of the comics Hercules. Ferguson played Ergenia, the daughter of King Cotys, the ruler of Thrace. The movie was released in 2014 and introduced Rebecca Ferguson to the American movie industry. The next year, the actress starred in the historical project again: it was The Red Tent set in the Old Testament period. Rebecca played the role of Dinah, the main character who describes the story of her family’s life. The movie was made in Morocco; the audience saw the premiere in winter 2014.

In 2014, the news about the actress’s new role came out: the former MI6 agent Ilsa Faust in the popular movie series Mission: Impossible. Rebecca had the chance to play with many global stars: Tom Cruise, Alec Baldwin, and Jeremy Renner. She had to spend more than six weeks learning different things from martial arts to shooting; as a result, Ferguson could perform the majority of the tricks herself. The woman confessed this project helped her get rid of some phobias and undergo the priceless experience of collaboration with the famous actors.

After the series Nya Tider, the actress and her boyfriend Ludwig Hallberg moved to the picturesque town Simrishamn. When the son Isac was born, Rebecca stopped working on series for a while. In the course of time, the couple’s relationship worsened, and they broke up.

Today, Rebecca Ferguson lives together with her new Swedish boyfriend whose name is Olaf.

After the movie Mission: Impossible – Rogue Nation came out, there were many speculations that Tom Cruise and Rebecca Ferguson were seeing each other; the actors did not make any comments. 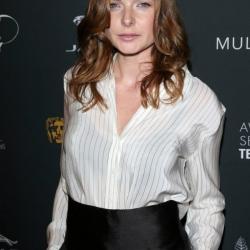