Alexander Ray Baldwin III, is better known as Alec Baldwin, is an American actor and filmmaker, winner of the Golden Globe and Emmy Awards, the star of such films as “The Edge”, “The Marrying Man” and 30 Rock.

He was born in Amityville, New York, USA. His father Alexander Ray Baldwin II was a teacher of history and sociology in high school, and also coached a youth football team. His mother Carol Newcomb Martino had six children and spent most of her time raising them.

Alec has two sisters, Jane and Elizabeth, and three younger brothers - William, Daniel and Stephen, who also became actors. So Alexander is the representative of the Baldwin dynasty.

It must be said that as a child, Alec did not even think about the acting career. He loved sports, played American football and was very fond of politics. Therefore, after receiving a document of secondary education, the young man enters the University of George Washington in the US capital and becomes a student of the Faculty of Political Science. He really wanted to make a career as a politician, and initially planned to become a student president of his university, but lost to another candidate, having just two votes less.

In order to earn money, the young man in parallel with his studies worked as a waiter in a restaurant, a warehouse chauffeur, a seller of men's underwear store. In general, he took up all proposals that could bring income. And once he worked in a television series. And the producers persuaded Baldwin to change his profession, since he possessed amazing photogenic qualities and kept himself in front of the cameras very naturally.

Alec did finish his studies, but he did not work in his specialty. He went to New York and began studying dramatic art at a local university. He also took acting classes at the famous Lee Strasberg Academy. Along with his studies, the actor made his debut on the Broadway scene in the fairy tale "Prelude to a Kiss" and the grotesque satire "Serious Money" and even received a prestigious theatre award.

But Alek Baldwin's interest in human and social sciences did not disappear forever. Much later, being a big Hollywood star, he will have his own column in the newspaper The Huffington Post as a columnist of all the significant events in the world.

On the screen, Alec Baldwin first appeared in the soap opera "The Doctors". At first he came as an extra, but as a result he stayed there for two and a half years. There were other television projects: "Hotel", “Cutter to Houston", " Knots Landing". The first major role of the actor was in the military drama "Sweet revenge", and popularity came after the black comedy " Beetlejuice", “the criminal story " “Married to the Mob" and the thriller "Miami Blues".

In 90s Alec Baldwin becomes an A-list Hollywood actor. His duet with Sean Connery in the action movie "The Hunt for Red October", collaboration with Kim Basinger in the romantic comedy "The Marrying Man" and with Al Pacino in the drama "Glengarry Glen Ross" make him the great actor. Even more famous were such projects as the criminal thriller "The Getaway", mystical fantasy “The Shadow", the detective " Heaven's Prisoners" and especially the adventure drama " The Edge".

In the 21st century, Alec Baldwin continued to shoot a lot. There are almost 120 films in his Filmography. Among the many works of this period is the comedy "The Last Shot", the melodrama "Suburban Girl", the family film "Lymelife" and the comic series "30 Rock", for which the actor received the Golden Globe Award. Also the audience received very warmly the duo of Baldwin and actress Meryl Streep in the comedy about love "Simple Complexities".

In 2004, Alec Baldwin tried to work as a director. He filmed the philosophical and mystical drama "Shortcut to Happiness", where he played the main role of a writer who sells his soul for the sake of glory. In his film he also invited Anthony Hopkins with Jennifer Love Hewitt. The project should have been very successful, but because of financial disagreements with film producers, the film appeared only three years later.

In his youth at the dawn of his film career Alec Baldwin had relations with actresses Holly Ganier and Janine Turner, with whom he was engaged in 1983, although a year later the couple announced their separation.

In early 90s, the actor began romantic relations with Kim Basinger, the star of the films "9½ Weeks" and "My stepmother is an alien". They were together for three years, during this time they even starred together in the comedy "The marrying Man." As a result, in 1993 the wedding of Alec and Kim took place. The ceremony was held in the groom's hometown, Amitiville.

But it must be said that many Baldwin's acquaintances were sure: Basinger marries him because of financial reasons. The fact is that just the day before the actress lost the court and was obliged to compensate the film company $ 6 million. This completely ruined the woman, and marriage with a successful actor repaid her fortune.

Anyway, Alec married Kim Basinger, and two years later became a father. They had a daughter, Ayland Elisha, who is now a famous model. By the way, it's interesting that in their house always lived animals, and a lot of them. Once they had 11 dogs, 7 cats and a wolf at the same time.

The family life of the actors lasted about seven years. In 2000, they parted, and a year later they had an official divorce. The main reason for their breakup was "insurmountable contradictions."

After that, Baldwin had short relations with such actresses as Kristin Davis, Tatum O'Neill and Anna Rothschild. Then he was dating for a long time the prosecutor Nicole Seidel and the star of the movie "Short Cuts" by Laurie Singer.

In 2011, Alec met the teacher of yoga Hilaria Thomas, who is 25 years younger than him. The couple married on June 30, 2012. The wedding ceremony took place in St. Patrick's Cathedral in New York. The actor is happy to this day with Hilaria. Moreover, the young wife helped Baldwin to experience the joy of paternity three times.

Firstly, they had a daughter Carmen Gabriela, then the son Rafael Thomas was born, and in September 2016 the world saw the fourth child of Alec and the third for his wife - the son Leonardo Angel Charles.

The Actor Alec Baldwin loves animals very much. He is an activist of the society "People for humane treatment of animals", and completely refused to eat meat and become a vegetarian. 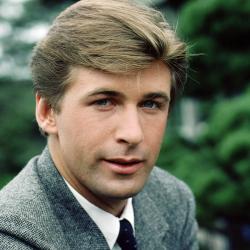