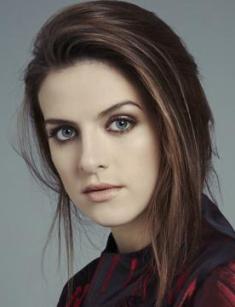 Aisling Loftus is an English actress famous for her roles of Agnes Towler in the series Mr. Selfridge and Sonya Rostova in the screen adaptation War & Peace.

Although Aisling was born in Nottingham, England, she came from an Irish family. The would-be actress’s parents, Paddy and Eileen Loftus, had two daughters: Aisling and her elder sister Aoife.

Loftus attended the Becket School in Nottingham and began to participate in city theater performances at the age of nine. As a teenager, she participated in many plays, and some of her roles were no less serious than those of adult actors. The Hotel Plays and Spur of the Moment were her most notable theater projects that brought nominations for prestigious theater awards.

In 2008, when Aisling had become a demanded movie actress, Screen International named her “a star of tomorrow” – only the most promising young artists could receive this honor. Loftus was only 18 at that moment. In the course of time, it was pretty clear: the magazine’s predictions were right.

Teenage Aisling Loftus debuted in an episode of the soap opera This is England, but the actress herself views the melodrama Peak Practice as the full-fledge beginning. Soon, the drama A Fish Out of Water, the children’s adventure series Help! I’m a Teenage Outlaw, and the comedy Ant & Dec’s Saturday Night Takeaway followed.

The audience appreciated the young woman’s lead role in the sports drama Dive; movie experts believed her acting was phenomenal. The short movie Jade gave the artist the Silver Bear at the Berlin International Film Festival; the next projects were equally popular: the crime drama Five Daughters, the family comedy The Borrowers, and the half-movie and half-cartoon Death of a Superhero.

The historical drama Oranges and Sunshine (2010) was another top-grossing project; the artist collaborated with her young and famous colleague Emma Watson. Soon, fans enjoyed their favorite’s acting in the drama Mr. Selfridge about the rise and fall of an American businessperson. Aisling personified a simple woman Agnes Towler, who independently built her own career; it was almost impossible at that epoch.

The actress never wanted to get married by all means – career achievements were her priority. Still, she found herself in a relationship with a British actor Jacob Anderson one day.

Jacob was Aisling’s peer; movie lovers know him for the legendary fantasy series Game of Thrones, where he personified Grey Worm. The wedding ceremony took place in 2018.

Today, the actress continues to participate in new projects. In 2018, fans welcomed the series A Discovery of Witches with her.