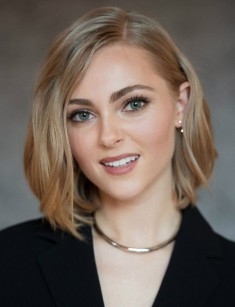 AnnaSophia Robb is a young American actress, who is famous for her teenage roles in such films as Charlie and the Chocolate Factory, Bridge to Terabithia and Because of Winn-Dixie.

The future actress was born on December 8, 1993, in the city of Denver, located in the state of Colorado. She is the only child of Janet and David Robb. AnnaSophia was named after her maternal great-grandmother, Sofia, and her paternal grandmother, Anna Marie.

AnnaSophia had a Christian upbringing, as her family was very religious. By the way, the girl became interested in acting in the church. When she was very small she performed in front of a rather large audience and decided that she would like to devote her future life to it. From the age of four, AnnaSophia was engaged in ballroom dancing and gymnastics, but when she started acting in films, she gave up these hobbies.

Robb did not go to schoolschool. She was home-schooled and learned subjects independently, under the supervision of her parents. Only the last few years, the girl began attending the Arapahoe High School, and she graduated in 2012. Two years later she entered New York University.

When she was a very small girl, AnnaSophia Robb started her career as a model, starring in commercials for several brands. As a teenager, she also appeared on the camera in a television commercial for McDonald's. In 2005, the girl was the face of Trad Clothing and more recently presented a new school uniform for girls.

AnnaSophia Robb was 11 years old when she first played in a film. The girl starred in a short film Father's Day and at the same time in a series of popular sitcom Drake & Josh, which was shown on Nickelodeon channel. She got the title character in the television special Samantha: An American Girl Holiday.

The young actress attracted the more serious attention of the audience after the family drama Because of Winn-Dixie and Tim Burton's tale Charlie and the Chocolate Factory, where the talented girl created the image of arrogant athletes Violet. It is curious that Robb collected a ball about the size of a softball from chewing gums during the filming.

But the real popularity came to AnnaSophia when in 2007 the dramatic film Bridge to Terabithia was released. The film is based on the book under the same name by Katherine Paterson. It is interesting that Robb was rejected at the preliminary casting, as according to director Gabor Csupo, she was too cute for the "tomboyish" Leslie Burke. But the girl returned again and showed a deep understanding of her character’s personality, thus, she got a coveted role.

There are several songs in the film, including "Keep Your Mind Wide Open" performed by AnnaSophia Robb. The video of the song was shot, and the single even hit the top 100 according to the authoritative Billboard edition.

The drama Have Dreams, Will Travel, which was even included in the Cannes festival, the comedy-drama film Spy School and the fantastic film Race To Witch Mountain were successfully received by viewers.

The biographical sports drama Soul Surfer was very heart-piercing. It tells about a 13-year-old surfer who lost her left hand as a result of an attack of a tiger sharks but managed to find the strength to return to elite sport.

TV fans could enjoy AnnaSophia’s acting in the teenage film The Carrie Diaries for six months. This series is the prequel of the famous series Sex and the City, and Robb played Sarah Jessica Parker’s character Carrie Bradshaw in high school.

The latest movies of the actress are tragicomedy The Way, Way Back, the family drama Jack of the Red Hearts, the historical medical series Mercy Street and the crime thriller A Conspiracy on Jekyll Island.

Fans thought that AnnaSophia Robb had relationships with her co-stars, such as Colton Haynes, Josh Hutcherson, and Emile Hirsch, but the actress did not officially confirm that these guys were her boyfriends.

But it is known that AnnaSophia was in a romantic relationship with the Canadian actor Alexander Ludwig. They met on the set of the film Race To Witch Mountain, and began to date and were together for almost three years.

Then Robb transferred Chris Wood’s love from the television series The Carrie Diaries to real life. Young people dated for about a year, but their feelings faded with the end of cooperation.

The actress had a serious relationship with fitness coach Adam Cobb for the last two years. But in the summer of 2016, the couple announced the breakup for unknown reasons. 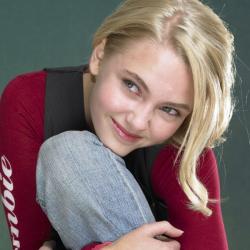