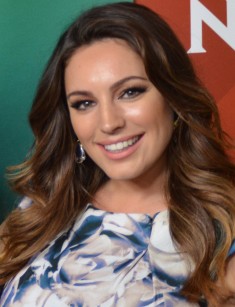 Kelly Brook has been working hard on her artistic career and took the first steps relying on her appearance and natural talent. Today, the woman’s body is considered ideal, and she can boast the unspoken title “Miss Best Breasts.” Besides, Kelly took part in several considerable projects as an actress.

Kelly Ann Parsons known as Kelly Brook was born in November 1979 in Rochester. The girl’s father was scaffolder, and her mother was a cook. Kelly Ann has a younger brother Damian.

When Kelly was a teenager, her mother noticed the girl had a model physique and decided her beauty should not go in vain. Thus, the 16-year-old girl followed her mother’s advice and took part in a beauty pageant where she won, just like her mother thought.

The parents had no opportunity to pay for Kelly’s further education. Brook entered the prestigious Italia Conti Academy of Theatre Arts in London. Since the girl failed to get a study grant, she had to earn for the studies. Because the young woman had nothing but a star-like appearance, she got a job in a tea shop and became a waitress. She also frequented castings held by companies that wanted models for advertising.

Soon, men’s magazines began to publish Kelly Brook’s photos, and the young woman attracted public attention. The producers of the popular program “Big Breakfast” decided to make Kelly a co-presenter. Although the program’s administration had some doubts, the young woman got on well with the program presenter Johnny Vaughan and increased “Big Breakfast” ratings: many men wanted to gaze at the sexy beauty wearing tight dresses.

As soon as the famous British lingerie company offered the model a good contract, Kelly signed it. Many banners where the charming beauty was advertising underwear appeared in London streets.

The news that Kelly Brook was leaving the show came in suddenly. The woman decided to sacrifice her career to spend as much time as possible with her beloved man Jason Statham.

In 1998, FHM placed Brook 29 in the list of the sexiest beauties of the world. The next year, the British was the third in the same rating. The legendary Maxim topped the model so that she became the most attractive women of the 20th century.

Kelly Brook appeared on the big screen in 1997. She started her career on TV and soon received the offer to take part in the reality show “Celebrity Love Island.”

The movie career began at the same period: the actress debuted in the movie ad video; later, the audience saw her in the movies “Sorted,” “Ripper,” “The Italian Job,” and multi-episode project “Smallville.”

In 2003, Kelly participated in the movie “The Italian Job.” It was Jason Statham, the woman’s boyfriend, who helped her get the role. Although her character was not central, the young actress had the chance to work with Mark Wahlberg, Charlize Theron, Donald Sutherland, and other actors.

In 2004, Kelly Brook had her first leading part: she starred in the British comedy “School for Seduction.” In a year, the next movie “Survival Island” followed and brought the actress a new wave of popularity. Besides, she met the actor Billy Zane who became her new lover at the thriller movie set.

Together with Zane, Kelly moved to Los Angeles where the actor provided her some assistance with her career. The couple starred together in the movie “Fishtales.”

In 2010, the actress earned some considerable money as the movie “Piranha 3D” was released. The project’s box office was $84 million. “The Vampire Diaries” star Steven R. McQueen appeared in the movie.

The British actress continued to work on movies. The comedy “Keith Lemon: The Film” with the popular comedian Leigh Francis was appreciated and got high ratings.

The actress gained one of the major roles in the sitcom “One Big Happy” but the project was closed after 6 episodes.

In the movie “taking stock,” Kelly Brook had the leading part.

In 2014, the model represented her own lingerie collection. According to Brook, she was encouraged to create the collection by her personal experience when she could not find a fitting item her herself.

Kelly Brook has had several love affairs that were widely discussed. The actress had been dating Jason Statham for seven years; the couple met at the movie “Snatch” premiere. Kelly was wearing a provocative dress and attracted the actor’s attention immediately.

Later on, the model left Statham for another handsome man, Billy Zane. The couple had almost married, but the ceremony was postponed because of Brook’s father’s death and finally canceled.

Kelly admitted she was attracted to a certain type of men: she liked when a man could become an outlaw.

In 2010, Kelly Brook could have given birth to a daughter whose father was the Scottish rugby player Tom Evans. However, Kelly miscarried. Two years later, the couple split up.

In 2014, the woman had the short-term relationship with David McIntosh. The couple announced they were engaged and broke up several months later.

In spring 2015, the press reported Kelly Brook had a new relationship with Jeremy Parisi whom she had met in Los Angeles. Jeremy is a French judo player and works as an instructor. The couple is close to getting married; 37-year-old Brook confessed she had been dreaming about having a child for a long time.

The actress posts photos with her over on her officially verified Instagram page. Besides, she shares posts in her Twitter.

Kelly has an official website where she tells about the life of a model, actress, and TV personality. She passionately describes her love of traveling, gardening, and cooking. The model likes to treat herself with something tasty. She does not go to the gym often and accepts her body the way it is.

In the last few years, Kelly Brook presents calendars with her photos. In the new 2018 calendar, the model is pictured against the background of nature; her feminine figure is emphasized.

Today, the actress has stopped acting; her last movie is dated back to 2015. Brook travels with her boyfriend, poses for covers, and does advertising. 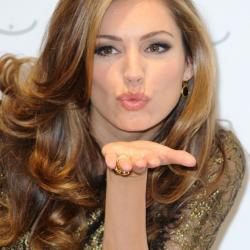