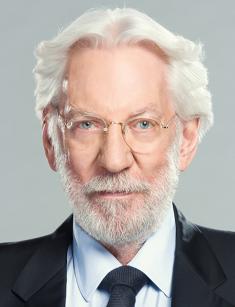 The Hollywood actor who in 2015 turned eighty years, has in his assets the prestigious Golden Globe and Emmy Awards. The actor played about one hundred roles in the movies and the theatre. Donald Sutherland presented to world cinematography a couple of great high-grossing films among which there are hits MASH, 1900, Fellini’s Casanova and The Hunger Games. Moreover, his on Kiefer Sutherland even overshadowed his father by the quantity of the prestigious awards.

Donald McNichol Sutherland was born in the Canadian province New Brunswick in the summer of 1935. He spent his childhood and youth in Saint John. In his veins, he has English, Scottish and German blood.

In Sutherland's family, there were no actors or representatives of other arts: his father was a direct-sales representative, and his mother was a housewife. Donald didn’t dream about the acting career in his childhood, though the teenager had many interests: sport, reading, journalism. At the age of fourteen the guy got the job of the youth reporter on the radio station, but in a short time he lost interest to his work and after the completion of the studies moved to Toronto.

Donald Sutherland began to attend the municipal university and chose Engineering faculty. The future actor was a successful student, but soon he became aware of the fact that his profession wasn't of his interest. Donald was concentrated on his classes at the acting courses of the university and the performances on the stage of the amateur theater. It was only on the stage, where Sutherland felt inspiration and fullness of life.

At the instance of his parents, Donald Sutherland received engineering education, being aware of the fact that it would be of no use for him. When he had finished one faculty, he enrolled in the second one – the faculty of Arts where he soon received the diploma.

Sutherland decided to focus on the theater. The actor performed with the troupe of the youth comedy theater. When he felt that he was ready for the professional acting, in 1956, he went to Britain and became the student of the London Academy of Music and Dramatic Art. In a short time, the Canadian appeared on the stages of the British theaters.

Donald Sutherland combined performing in the provincial theater with the shootings on the television. The British theater admirers appreciated the young artist, and by the age of twenty-five he had become the actor demanded at the eminent London directors.

Donald Sutherland’s cinematic career was developing slowly. As well as the majority of his colleagues, the actor began his career with the episodes and supporting roles in the low-budget projects. The actor’s appearance played an important role: the fact that the actor was 6 feet and 4 inches tall "hinted" at the directors in what image Sutherland could look most natural.

In 1964 Donald Sutherland appeared in the movie Il castello dei morti vivi. In a year he took part I the pictures Fanatic and Dr. Terror's House of Horrors. In 1967 the Canadian took part in the fighter The Ditry Dozen directed by Robert Aldrich.

The actor received his star role three years later: Donald Sutherland performed the key personage in the Oscar-winning black comedy MASH. The movie critics considered this movie to be a bright anti-war project in the history of Hollywood. After the movie had been released, Sutherland became famous overnight and was nominated for prestigious film awards.

The number of high-grossing projects with the participation of Donald Sutherland was growing quickly, and the millions of the spectators on both sides of Atlantic learned the name of the Canadian. The comedy fighter Kelly's Heroes in which the actor worked together in the brilliant tandem with Clint Eastwood, the detective story Klute in which Sutherland appeared on the screen in the major roles with Jane Fonda, the anti-war drama Johnny Got His Gun – everywhere the Canadian actor became in the leading roles.

In 1971 there was premiered the British-Italian mystical thriller Don't Look Now in which the leading roles were performed, Donald Sutherland and Julie Christie. The picture was included to TOP 100 of the best English movies of the century, and the thriller got to TOP 10. In 2011 the poll at the British magazine Time Out confirmed that the movie directed by Nicholas Roeg was the best-seller at any time in the future. The interviewed people gave to the thriller the biggest number of voices.

During the second half of 1970-s, the Canadian enriched his filmography with a couple of bright projects. In the drama Fellini’s Casanova which was shot by the legend of world cinematography, Sutherland played the role of Casanova. In his interpretation, the lady-loving Venetian is a tragic character who believes that he became famous for his scientific and philosophical tracts, but not for his numerous love affairs.

In 1976 there was released the historical melodrama 1900 directed by another eminent Italian - Bernardo Bertolucci. In this movie, Donald Sutherland appeared in the star company with Robert De Niro and Gérard Depardieu. The movie was recognized as the best European movie of the year though it didn't receive many prestigious awards. It's noteworthy that the fascist Attila performed by Sutherland is absolutely opposite Casanova, but the change of the image isn’t a difficult task for the star actor.

The same year the actor played in the screen version of the novel The Eagle Has Landed written by British author Jack Higgins. Donald received the role of IRA terrorist. And in 1977 Sutherland brilliantly coped with the key personage of the comedy The Kentucky Fried Movie.

The movies mentioned above were successful in the hire and were paid off in the hire though they didn't bring popularity to the actor: he was nominated ten times but didn’t receive the awards. For example, the fantastic horror Invasion of the Body Snatchers of 1978 brought Sutherland his next nomination for Saturn Awards, and his role in the drama brought him a nomination for Golden Globe Awards. At the same time, the last movie won four Academic awards and earned the box office of $54 million in the USA.

In the mid-eighties, Donald Sutherland together with Sean Penn took part in the comedy thriller Crackers and in the comedy Trouble with Spies. The actor was working actively in two or three projects a year, but his career began to decrease. The drama Threshold became the only exception. Sutherland received Emmy Awards for Best Actor.

The actor has his new wave of popularity in 1990-s. There appeared the new successful works in the actor's filmography – Backdraft, Cerro Torre: Schrei aus Stein, Six Degrees of Separation. The movie critics and the audience met these pictures positively. For his role in the series Citizen X, Donald Sutherland became the winner of the Golden Globe Awards for the first time. The horror movie Virus in which the actor transformed into the personage of the captain Robert Everton, the cunning and greedy drunkard had a huge box office. Jamie Lee Curtis and William Baldwin also took part in this movie

The 2000-s were marked by a couple of high-rate movies among which was the movie Cold Mountain in which Donald Sutherland performed the role of Reverend Monroe, the drama Pride, and Prejudice (Mr. Bennet) and the mini-series Path to War. The last series is a biographic drama in which Sutherland embodied the character of Clark Clifford, the counselor to the president Lyndon Jones.

But the role of President Coriolanus Snow in the anti-utopia The Hunger Games brought the greatest success to the Canadian actor.

Donald Sutherland was continuously looking for his beloved woman: the actor was married three times with the actresses. His colleague Lois Hardwick became the first spouse of the star. In a couple of years, the artists understood that they wouldn't be a successful family and decided to part. In a civil marriage with Shirley Douglas, their son, Kiefer was born. But this marriage also came to an end.

In 1972 Donald Sutherland divorced and married to the Canadian actress Francine Racette, who gave birth to their three children – the sons Rossif, Angus, and Roeg. With Francine, the Hollywood actor has a united and reliable family.

What about the children of the famous actor, his son Kiefer has gained popularity. He appeared together with his father in the movies Max Dugan Returns and A Time To Kill.

Sometimes in the press, there appears false information about the bloodline of Donald Sutherland and Australian model Alyssa Sutherland. All that the celebrities have in common is their surname.

In 2015 in Canada there was premiered the western Forsaken in which Donald Sutherland and his son Kiefer Sutherland and Demi Moore appeared in the leading roles. Donald performed the role of the priest Rev.Clayton and the father of the trained killer whose personage was played by Kiefer.

The character of Kiefer returned home after ten years of imprisonment to make thing right with his father. The movie came out on the screen in February of 2016. 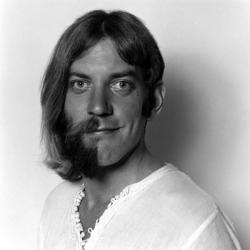