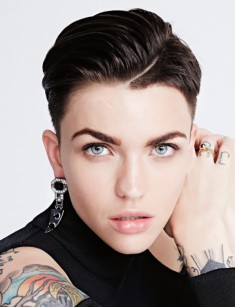 Ruby Rose Langenheim was born in the family of the young artist Katia and Peter, the owner of racing horses. Later Ruby’s mother had run away from the father and brought up the daughter on her own. They moved from one place to another very often. For a short time, they had been living at Ruby's aunt – Mary. Further, they moved to the Surfer's Paradise resort, but then they had to move to Daedra Rose Langenheim, the grandmother who lived in Melbourne.

In school days Ruby was an ordinary-looking "grey mouse". Her schoolmates mocked at her all the time because of her tasteless clothes and distant behavior. The sexual abuse by one of her relatives could become the reason of her "dullness", after that she began to have bipolar disorder and she tried to commit a suicide.

At the age of 12, she reported about her non-conventional sexual orientation, hoping that the attacks would stop, but everything had only worsened. In one of the conflicts when Ruby was 16 years old, she suffered from the blow by an iron chair on the head, and then she was taken to the hospital. Only after the trip to Germany Ruby could completely change the perception of herself. She was rather fluent in German, and as soon as she got an opportunity to go on the training exchange program, she used her chance. In Germany her image and appearance had changed: Ruby had her hair cut and even got a piercing in her tongue.

For the first time, Ruby Rose had felt the taste of glory when she participated in the modeling competition in 2002. The contest was organized by "The Girlfriend " magazine of the Australian edition. Ruby took the second place conceding the victory to Catherine McNeil.

In 2007 Rose's career had promptly taken off, she began to host the program on MTV-Australia television channel. The year 2009 was plentiful with events: she received ASTRA Award and was called the most popular personality on television, also she took part in competitive Australia’s Next Top Model program and became the leader of "The 7 pm Project" show. Then she was entrusted with the duties of the special correspondent in Vancouver at the Olympic Games - 2010.

In 2008 Rose tried her acting skills. She played the role in the low budget picture "Suite for Fleur". In 2009 Ruby Rose acted in the drama "Around the Block" together with the actress Christina Ricci, and in 2015 she received Stella's role in the TV series "Orange Is the New Black".

Ruby Rose proved herself in the musical art in 2012, having composed the song under the title "Guilty Pleasure".

Ruby Rose doesn't conceal her non-conventional sexual orientation, she is openly lesbian. Having a female appearance, R. Rose feels herself partly as a man, and her behavior is corresponding. At the age of five, Ruby wanted to become a boy and even was saving money for the operation. Having reached maturity, Rose understood that it was not necessary to resort to such cardinal decisions. Having chosen a job of the model, she got an opportunity to be different all the time.

In 2009 Ruby was noticed while kissing the Australian top model Catherine McNeil. Later their engagement was discussed, but in 2010 they broke up.

In 2014 Rose met Phoebe Dahl and the romantic relations began between them, and in December, 2015 they announced their parting in the social networks.

In 2016 Ruby Rose began to have a love affair with a businesswoman Harley Gusman, but two months later they separated.

Now Rose is involved in the relationship with the vocalist of "The Veronicas" band - Jessica Origliasso. 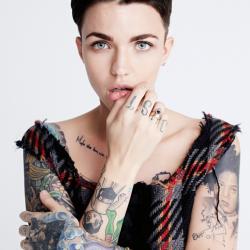