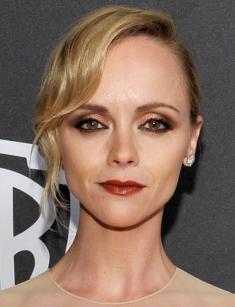 Christina Ricci is a popular American actress and producer, who gained fame after playing the role of Wednesday Addams in the film The Addams Family. On February 12, 1980, Ralph Ricci and his wife Sarah had a daughter, who was named Christina. The future actress was the youngest of four children. The girl grew up and was raised in a very unusual family, living in Santa Monica, a suburb of Los Angeles.

The mother of the future actress worked as a model in the past and then changed her profession to a more mundane and became a realtor. In her youth, Sarah was slim and thin and always dreamed that her naturally plump younger daughter will eventually also acquire a model appearance and will shine on the covers of glossy magazines. Therefore, in addition to the diet of Christina, where there were minimum desserts, Sarah did not care about anything else.

Christina's father was also a peculiar man. Before becoming a lawyer, Ralph worked as a psychoanalyst at home. And he cured his patients with the help of non-traditional methods, cryotherapy. According to the conclusions of some American scientists, vivid manifestations of emotions (in this case, a cry) help to cope with internal feelings and stresses. So, Ralph brought home clients, who wanted to get rid of various phobias and depressions.

Ricci did it in his office, which was opposite Christina's room. That is why the future actress was known as a misanthrope and disliked people as a child. But it is possible that the divorce of her parents influenced such a worldview of the actress: when the girl was 13 years old, Sarah and Ralph terminated the marriage contract.

She was out at night on the roof not to hear medical screams but Ralph and Sara took a similar behavior of the girl different: it seemed to them that their daughter is a dreamy nature, who loves to watch the stars and the night sky. By the way, Ricci sometimes parodied heard the dialogues before her mother.

After moving to New Jersey, Christina had to go to Glenfield Middle School. Ricci extraordinarily drew attention to win a place in the sun in a new school: she climbed to the school bullies and infuriated them. A snooty girl didn't fight back but loved to complain about them the naughty parents and teachers.

Ricci's filmography includes many roles in films that eventually went down in the history of world cinema. For example, it is difficult to find such a moviegoer, who did not hear of Casper (1995) or Fear and Loathing in Las Vegas (1998). But it is worth saying that Christina does not have and never had a special acting education and the actress does not see the point in it. Christina admitted that she worked on the film site intuitively.

Ricci's creative biography started by accident. When the girl was eight years old, she performed on the stage of the school theater at Christmas. A talented person attracted the attention of a famous film critic by a happy coincidence, who advised her parents to send her daughter to the creative path. Therefore, Sarah dragged her children to agencies and auditions in her spare time, hoping that it will help in the future.

Christina starred for the first time in 1990. It was Richard Benjamin's film Mermaids. It is noteworthy that of a little girl made friends with Cher on the set, despite the impressive age difference, Ricci considers her friend all her life. In 1991, Ricci starred in the black comedy The Addams Family, the plot of which tells the story of the life of infernal-magical relatives.

According to rumors, the creator of the Gothic film did not want to take Christina even on trial because he saw a refined and aristocratic nature in the role of Wednesday Addams and not a girl with plump cheeks and a turned-up nose. But Cher taught Christina that the main thing in the actor's craft is to force yourself to remember. So, without thinking twice, Christina ran toward Barry Sonnenfeld, knocked him to the floor and clung to his hand with her teeth. After such a flighty act of the contender, the famous director could not give the role of this gloomy character to another girl.

It is noteworthy that Ricci became almost the most popular teenage child and her image of Wednesday Addams is considered to be a cult after the premiere of The Addams Family. But a gifted girl was often denied in the roles in the future. For example, she wanted to star in Lolita by the novel of Vladimir Nabokov but the directors chose another actress, Dominique Swain.

It is not surprising that the white-skinned beauty with a Gothic appearance was noticed by the director of terrible fairy tales Tim Burton. In 1999, the movie Sleepy Hollow was released, where Christina Ricci played a major role. The plot of the film tells the story of Ichabod Crane (Johnny Depp), who goes to the sinister village to investigate a series of brutal murders. However, the young man does not even suspect that the local legend of the headless horseman is a harsh truth.

It is worth noting that Christina established herself as a diverse actress who can work in any genre. For example, the girl appears before the audience in the role of the eccentric lesbian Selby Wall in the film Monster (2003) and Ricci transforms into an enchanted aristocrat with a pig snout instead of a nose in the film Penelope (2006).

In 2009, a little beauty (the height of Ricci is 5 feet (155 cm) and weight 121 lbs (55 kg)) removed in the action film After.Life of Agnieszka Wojtowicz-Vosloo. The plot of the drama with a touch of suspense is simple and non-trivial: Anna Taylor was in a car accident after a quarrel with her beloved. Waking up in a funeral home, a young girl, contrary to the claims of the service employee Eliot Deacon (who can communicate with the spirits), does not realize that she is dead. Therefore, Anna, being on the verge of despair, tries to contact her boyfriend but all attempts were false.

Christina was a windy girl in a love relationship: her affairs did not last longer than three months because Ricci often deceived her admirers to give life a dramatic touch. According to rumors, the actress met with the director Adam Goldberg but their relationship soon failed. The next lover of Christina was the comedian Owen Benjamin. In 2011, the young people announced their imminent engagement. However, it was known that the girl married James Heerdegen in 2013.

It is known that Ricci decided on a rather unusual operation in 2000. While the other girls dreamed of a dense chest secretly, Christina, on the contrary, reduced her chest. Fans of the actress noted that the photos "before" and "after" vary significantly but Christina was satisfied because men will finally look her in the eye.

Christina loves to lie in front of the TV in her free time, watch various movies or listen to her favorite band Red Hot Chili Peppers. She also loves pets: Ricci has dogs and she often puts photos of pets on her "Instagram."

In 2016, Christina Ricci together with Susan Sarandon, Selma Blair, Courteney Cox starred in the drama Mother's Day and participated in the voice acting of the cartoon Teen Titans: The Judas Contract in 2017. Christina Ricci has a net worth of $18 million.