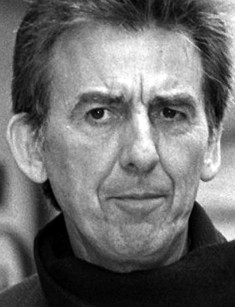 George Harrison was the member of the legendary Liverpool quartet the Beatles. The winner of 13 Grammy Awards and the Member of the Order of the British Empire did not take an interest in attributes of popularity – he was preoccupied with his own emotions and near-music experiments. The guitar player became famous for his works after the Beatles.

George, his sister Louise and brothers Harry and Peter were born in Liverpool into the family of a bus driver and salesperson. From the very beginning, Harrison’s career developed in such a manner that he would join the Beatles sooner or later.

The little George went to the Dovedale Primary School; John Lennon went to the same school and was two years older. In the Liverpool Institute for Performing Arts, George met Paul McCartney and made friends with him. At this period, he took an interest in playing the guitar.

The mother supported the youngest son’s hobby. Although the family was not wealthy, the parents managed to purchase an acoustic guitar for their son. Harrison’s style was influenced by the American guitar player Duane Eddy who remained unknown in England at that period.

Together with his friends and brother, the young musician founded the group the Rebels and performed skiffle. Soon, Paul introduced Lennon to 15-year-old George. The young man impressed his new friend with his ability to perform “Raunchy.” Because Harrison was young, he entered the group created by Lennon and McCartney only a year later.

The Beatles period in George’s life lasted for ten years. The quartet had 210 songs; officially, 22 of them belonged to Harrison. However, the guitar player was the favorite of excited female fans.

Harrison never planned to become a star: the young man just wanted to be a musician for a couple of years and enter an art college. By 1963, when the first album of the Beatles “Please Please Me” was released, the world learned what Beatlemania was.

Unlike his colleagues, Harrison did not have a bunch of ideas for songs. George’s first song “Don’t Bother Me” came out in the second album. The album “Rubber Soul” contains the songs “If I Needed Someone,” “Norwegian Wood,” and “Think for Yourself.”

The musician said once that his friends hardly accepted to record his songs. “While My Guitar Gently Weeps” and “Something” became hits, but Harrison created more songs, such as “I Need You,” “Here Comes the Sun,” “Blue Jay Way,” and “I, Me, Mine,” and performed them himself.

When Harrison was the member of the Beatles, he had two solo instrumental albums, “Electronic Sound” and “Wonderwall Music,” released. The previously unknown instrument, Robert Moog’s synthesizer, sounded. Not many people understood and valued Harrison’s works. Some believed that only those taking drugs could comprehend that cacophony, others insisted it was the musician’s joke.

At the movie “Help!” set, Harrison watched a person playing the sitar, the Indian stringed instrument. For some time, the musician took fancy in the Indian music; the songs “Taxman,” “Love You To,” and “I Want to Tell You” from the Beatles’ album “Revolver” were created in the Indian music style.

As Harrison left the Beatles, he presented the triple album “All Things Must Pass” which became platinum three times. In this project, the musician let out all his ambitions he could not nurture in the ensemble.

To record the album, the world’s stars gathered together: the former Beatles member Ringo Starr, the founder of Procol Harum Gary Brooker, and the Grammy Award winners Jim Gordon and Klaus Voormann. Phil Spector produced the album. The songs “My Sweet Lord” devoted to Krishna and “What Is Life” came out as singles and topped American and British charts. The renewed version of the album was released in 2001 and placed the fourth in Billboard 200.

In 1973, the solo album “Living in the Material World” came out; its single “Give Me Love (Give Me Peace on Earth)” flew high in the American and British charts. Overall, the album was successful: it topped the US chart for five weeks and became the leader in Canadian, British, and Australian charts; it managed to drive out Paul McCartney’s album.

In the next year, George presented the new album “The Dark Horse.” The musician gave concerts in the USA, but his fans were not very enthusiastic. Although the album was included in the first five albums in Billboard 200, people did not like the presence of Ravi Shankar, the Indian composer and George’s friend. In addition, George had a strained voice at that moment.

Apart from Harrison’s individual projects, his fans like his covers: the Beatles discography included “Chans” by the Cookies, “Roll Over Beethoven” by Chuck Berry, and “Got My Mind Set on You” by James Ray. The latter song was the solo single that helped conquer American charts. In Great Britain, the hit topped the charts for four weeks. The Electric Light Orchestra founder and the legendary leader vocalist Jeffrey Lynn produced the album with Harrison; the American director Gary Weis created two music videos to the single.

Later on, the former Beatles member released the albums “Cloud Nine,” “Extrа Texturе,” “George Harrison,” and “Thirty Three& 1/3.” Some critics consider “Living in the Material World” to be the best project by Harrison. These words gave the title to Martin Scorsese’s documentary “George Harrison: Living in the Material World” that told the story of the musician’s life and spiritual quests.

In addition, Harrison is the first rock musician who organized a charity concert. The performance to support Bangladesh people took place in the early 1970s in the Madison Square Garden, US.

In 1966, George married the glorious London model Pattie Anne Boyd. The young people met in 1964 at the movie “Hard Day's Night” set. Eventually, the beauty left her husband for his friend Eric Clapton. Terrible as it may sound, two friends had the duel with guitar parts. Although the situation was ambiguous, the musicians managed to remain friends, although they did not mention the woman’s name. The press enjoyed the awkward moments and often published the photos of Harrison, Clapton, and Boyd.

Harrison found his family happiness with the Mexican Olivia Trinidad Arias. The woman took care of George when he got hepatitis. Later, Olivia saved her husband from a mentally disabled fan who attacked George with a knife. In August 1978, the couple’s only child Dhani was born. The son inherited his father’s interest in music and Formula-1.

In comparison with his Liverpool friends, George Harrison stayed in the shadow and rarely gave interviews. However, he was the first person who got interested in the material side of art: in 1964, he founded his own company Harrisongs Music Ltd that quickly legalized Harrison’s right on his songs.

In 1974, the producer had the recording company Dark Horse Records. Four years later, the musician took an interest in movies and founded the movie company Hand Made Films.

The Indian culture and the Hare Krishna movement influenced the former Beatles member to a large extent. His son’s name was composed of the notes in the Indian musical scale.

In 1997, the famous British musician was diagnosed with throat cancer. In November 2001, George Harrison passed away in Beverly Hills among his nearest and dearest. His body was cremated, and his ashes were spread above the waters of the Ganges as per his last will. 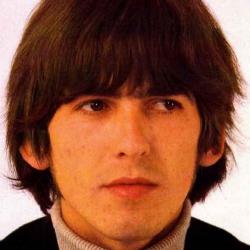