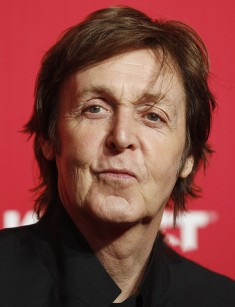 The founder of the British rock group “The Beatles” Sir James Paul McCartney was born in 1942 in a small maternity hospital in the suburban area of Liverpool. At that time, his mother Mary worked as a nurse in this hospital; later, she became a domiciliary midwife. The boy’s father James was Irish and worked as a weapon maker at a military factory during the Second World War. As the war ended, he became a cotton salesperson.

In his youth, James was fond of music; he used to be a member of a famous jazz band in Liverpool in the 1920s. He could play the trumpet and piano. He also cultivated the love of music in his children, Paul and his younger brother Michael.

At the age of 5, Paul went to a Liverpool school. When he was 10, he took part in his first concert and received a prize. In the next year, he went to secondary school – the Liverpool Institute – where he studied until 17. In 1956, the family suffered from a great loss: the mother Mary died of breast cancer. After her death, Paul isolated himself from the world.

It was music that became the way out. Thanks to his father’s support, the boy learned how to play the guitar and created his first pieces of music. This family tragedy made an impact on the musician’s biography and made Paul McCartney close to John Lennon who had also lost his mother in his youth.

Paul McCartney was an inquisitive student: he never missed a theater premiere, took interest in art exhibitions, and read famous poetry. Together with his college studies, he had a small business and worked as a traveling salesman. This experience proved to be useful later: McCartney was able to keep the ball rolling with any person, and he demonstrated his openness and benevolence to people. There was a moment when the young man wanted to be a theater director, yet he could not enter the university because he applied too late.

In 1957, the future founders of “The Beatles” met for the first time. Paul McCartney’s school friend invited him to try himself in the young group “The Quarrymen” created by John Lennon. At that period, John was not very good at playing the guitar; Paul shared his knowledge and helped his friend to master the technique.

The young men’s friendship was strong. Although their relatives did not approve of it, their relations were the same, and they continued to create music together. Paul McCartney invited George Harrison in the refreshed group “The Quarrymen”; later, Harrison became one of the legendary quartet “The Beatles.”

By 1960, the music group was actively performing at various scenes of Liverpool. Paul and John decided to change the old name into the more expressive “The Silver Beatles” which was shortened to “The Beatles” after the tour in Hamburg. In this year, the phenomenon of Beatlemania took place among the group’s fans.

“Long Tall Sally” and “My Bonnie” were the first songs that provoked uncontrolled emotions among the audience. In spite of this fact, the recording of the first album at “Decca Records” studio failed. After the tour in Germany, the music group signed an agreement with “Parlophone Records.” At this time, the fourth legendary group member Ringo Starr joined “The Beatles,” and Paul McCartney changed the rhythm guitar for the bass guitar.

In the following two years, the first hit songs “Love Me Do” and “How Do You Do It?” came out; Paul McCartney was the author. From the very first singles, the young man built himself as a full-fledged musician, and all group members listened to his recommendations.

The image of “the Beatles” was different from that of the existing music groups. The musicians were focused on their art and looked like real intellectuals. Initially, John and Paul created songs independently, but they began to cooperate later.

In 1963, the single “She Loves You” topped the British music chart of pop music and remained there for almost two months. This fact made “The Beatles” the most popular group, and Beatlemania was often spoken about.

1964 brought the group the breakthrough in the whole world. The musicians toured over Europe and then went to the USA. Crowds of fans accompanied “The Beatles,” and fans got hysterical during the concerts. “The Beatles” conquered the US after their performance was broadcast on the central TV channel in “Ed Sullivan Show.” More than 70 million people watched the program.

Break-Up of «The Beatles»

Paul distanced himself from the group because the members’ philosophical views were too different. Besides, McCartney was the only one who did not welcome the new group manager Allen Klein which also split the musicians.

Before leaving “The Beatles,” McCartney created several immortal singles: “Hey Jude,” “Back in the U.S.S.R.,” and “Helter Skelter” that were included in “The White Album” whose cover was notable for its design. It was completely white without any pictures.

It is interesting that “The White Album” is the only album in the world included in the Guinness World Records as the fastest selling album. The last album “Let It Be” marked the finish line for McCartney in the quartet.

All legal proceedings related to “The Beatles” were done by the beginning of 1971; the legendary group ceased to exist. Throughout several years, the group created six platinum albums, topped the list of 50 greatest performers, and won 10 Grammy Awards and one Academy Award.

Since 1971, Paul began his solo career with his wife Linda’s assistance. The first album of the group “Wings” was created together with the Philadelphia Orchestra. It topped the British chart and placed second in the USA. Paul and Linda’s duet was called best in their native country.

Paul and John Lennon took part in several concerts together and remained friends until Lennon’s assassination in 1980. The next year, Paul stopped giving concerts in “Wings” as he was afraid to be murdered like Lennon.

After “Wings” break-up, Paul McCartney created the album “Tug of War” which is considered the singer’s best solo album. The musician bought several old mansions for his family and had a personal music studio in his house. McCartney’s new albums were regularly appreciated by critics; they were also popular among the audience.

In 1982, the singer received the Brit Award as the British Male Solo Artist. He was working hard and productively. The new songs from the album “Pipes of Peace” had to do with the themes of disarmament and peace on the planet.

In the 1980-1990s, McCartney recorded many songs with other famous musicians, for instance, Tina Turner, Elton John, and Eric Stewart. Paul experimented on arrangement and recorded songs with the London Symphony Orchestra. His discography often combined failed projects and hits.

Although Paul McCartney did not quit rock and pop music, he began to create symphonic music. The ballet “Ocean's Kingdom” performed by the Royal Ballet troop in 2012 is considered the British musician’s masterpiece in the classic genre.

The former soloist of “The Beatles” created soundtracks for British cartoons. In 2015, the cartoon “High in the Clouds” based on Paul McCartney and his friend Geoff Dunbar’s scenario came out.

From the mid-1980s, the singer has been interested in painting. McCartney has exhibitions in New York galleries regularly; he has created more than 500 paintings.

At this time, Paul McCartney met the young woman who influenced his worldview significantly: it was the artist and model Jane Asher. Their relationship lasted for 5 years. Paul McCartney was close to Jane’s parents who enjoyed a special status in the London high society.

The young man lived in the penthouse of the Ashers’ mansion. Together with Jane’s family, McCartney visited avant-garde theater performances, got familiar with modern music styles, and listened to the classical music. At this time, Paul created some of his most famous works: “Yesterday” and “Michelle.” Little by little, the musician was distancing himself from his group friends. He spent his free time communicating with famous art galleries owners; he also became a regular customer in the store where psychedelic books were sold.

Paul McCartney and Jane Asher split up right before their wedding because of the musician’s unfaithfulness. McCartney was not single for a long time: he met the woman who became his first wife soon. The photographer Linda Eastman was a year older than Paul. McCartney, Linda, and her daughter from the first marriage Heather settled outside the city in a small mansion. McCartney lived a rather isolated life at that time.

In this marriage, three children were born: the daughters Mary and Stella and the son James.

In 1997, McCartney was knighted: he became Sir Paul McCartney. The next year, the tragedy followed: his wife Linda died of cancer.

In a while, the musician found comfort at the former model Heather Mills’s arms, yet he did not forget his first wife. He created a whole album in her honor and had a movie with Linda’s photos and works released. All money collected from the album sales were donated for oncological patient treatment.

In 2001, the musician lost his old friend George Harrison. Still, the bitterness of these events was sweetened by the birth of his third daughter Beatrice Milly in 2003. The baby girl gave the father hope, and he found his second wind to create.

In the course of time, the British singer split up with his second wife and married for the third time; it was the American business lady Nancy Shevell. Paul had been acquainted with her when Linda was alive. Nancy was one of those who tried to persuade the musician not to marry Heather because she might be dishonest. The warning proved to be justified: during the divorce proceedings, Heather seized a considerable part of McCartney’s money, several million of pound sterling.

Today, McCartney lives with his new family in his American estate.

The conflict with Michael Jackson

In 1983, Michael Jackson received Paul McCartney’s invitation; the musicians started their cooperation and worked on the songs “The Man” and “Say, Say, Say.” The musicians made friends and visited several social events together.

The British musician wanted to teach his friend how to do business recommended him to acquire the rights to some music. The next year, Jackson joked that he was going to buy the songs of “The Beatles” when they met in America. Several months later, Jackson put his plan in motion. This behavior shocked Paul McCartney and made him Jackson’s enemy.

Except for music, the singer actively participates in charity. He donates a lot of money for animal protection. Together with his first wife Linda, the singer joined the organization fighting for GMO banning.

The musician is vegetarian. He gives concerts and encourages to avoid creating fur clothes because of the cruelty to innocent animals.

After the East countries were involved in military actions, Paul McCartney addressed the authorities to stop using anti-personnel mines.

In the early 2000s, the rock ’n’ roll king had his first Russian tour. In the context of the world tour “Back in the World,” the musician performed at the Red Square in Moscow. Paul McCartney met the Russian President Vladimir Putin in his Kremlin residence.

The next year, the Liverpool 4’s leader gave a solo concert at the Palace Square in Saint Petersburg. The further performances took place at the Vasilyevsky Spusk Square and Olympic Stadium. McCartney also went to Kiev and played in a solo concert there.

In 2012, McCartney addressed the authorities to protect the Russian scandalous group “Pussy Riot” and wrote a letter to Vladimir Putin.

In 2016, it was announced that Sir Paul McCartney was going to appear in the movie “Pirates of the Caribbean: Dead Men Tell No Tales.” The famous British artist played with the permanent cast: Johnny Depp, Orlando Bloom, and Geoffrey Rush.

The scene where the pop star performed his own song was included in the final version of the movie. It was McCartney’s first role in a feature movie – before, the musician starred in documentaries. The fifth part of “The Pirates of the Caribbean” came out in summer 2017. 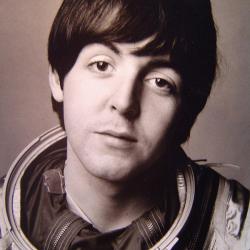