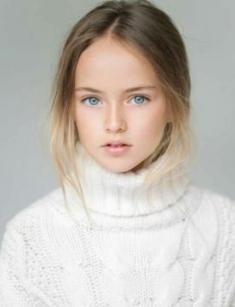 Kristina Pimenova can boast more Instagram followers than her adult colleagues Natalia Vodianova and Claudia Schiffer. It is not surprising: the girl is one of the most popular child models whose popularity is growing day by day.

The beauty was born on December 27, 2005, in Russia and grew up with her elder sister, Natalia, who studies in Great Britain now. Kristina’s mother, Glikeriya, used to be a model, and her father, Ruslan Pimenov, was a soccer player who participated in the FIFA World Cup in 2002. He played for Lokomotiv Moscow, Metz, Alania, Dynamo Moscow, and Dinamo Minsk; the man won many prestigious awards, such as The Russian Cup (1999-2000, 2000-2001), Russian Super Cup, and many second places.

When the girl was little, the family moved to France: the father played for Metz at that period. However, the would-be star did not live there for long: when she turned one, she came back to Moscow.

In addition to modeling, the young talent was engaged in artistic gymnastics at Olga Kapranova’s school and won several prizes. Still, she quitted in 2015 because of her busy schedule. Kristina had so little time that she had to have lunch in a car while the mother was driving her to schools and clubs. Despite frequent business trips abroad, Pimenova tries to study well.

Some sources claim that Kristina’s parents have separated or even divorced officially; the reasons remain unknown. The soccer told journalists that his relationship with Glikeriya was warm and friendly.

When Kristina’s mother was going for a walk with her daughter, people often asked her if the girl had shot for magazines or appeared in a movie. Soon, Glikeriya sent the photos of her child in modeling agencies; in 2009, Kristina joined the President Kids modeling school. Some reporters spread the speculations that the woman wanted to earn thanks to her daughter and insisted that Kristina took up modeling.

However, Glikeriya denied these rumors: she did just what other moms did when they sent their children to dance or drama schools. She wanted Kristina to be involved in some art. Pimenova liked shooting and perceived it as a game: she interacted with peers, and everything was cheerful. However, she behaved calmly and posed for cameras even when she got tired. Everybody who worked with little Kristina emphasized her natural photogenic features and professional approach.

When the model grew up a little, she began to see her job more seriously.

In 2010, the photographer Zhanna Romashka offered Pimenova to try and send her pictures to an Italian modeling agency. Thus, the girl became one of the first Russian kids who signed a contract with B-TalentScout in Milan.

The photo shoot for the popular store Silvian Heach kids was Kristina’s first significant achievement. It was pretty fruitful: the images of the child appeared in the city: Kristina was wearing fashionable garments on billboards and buses.

It was a fantastic success, and Kristina gained numerous offers that made her one of the most popular girl models collaborating with Roberto Cavailli, Armani, and Dolce&Gabbana. Federal channels were telling the story of her life, and journalists were queueing to interview the young star.

In winter 2015, Kristina participated in the Pitti Immagine Bimbo children’s show. In spring, she shot for the covers of Vogue Kids, ELLE Kids, and so on. The model is so popular that her image has appeared in the game Kristina Dress Up available on AppStore and Google Play: one should pick dresses for Kristina.

Being a model is similar to being an actress: it is necessary to present someone at a photographer’s request. Pimenova is pretty good at it: fashion lovers remember her personification of Marilyn Monroe, Charlie Chaplin, and young Madonna.

In 2016, Kristina collaborated with another child model, Anastasia Bezrukova, and signed contracts with New York Model Management, LA Model Management, and BRAVO Models. Besides, the girl announced on Instagram she would be the headliner of the Top Mini Star Models show.

In 2017, Pimenova played one of the main characters in the horror The Russian Bride; she collaborated with Corbin Bernsen, Oksana Orlan, and Keenan Johnston. It is a story about a millionaire who meets a Russian woman Nina on the Internet and invites her to the United States. The American life seems to be a fairy tale, but everything collapses when the man’s evil plan is revealed.

Besides, Kristina had an episodic role in the Italian movie Creators: The Past; she played a singing girl.

The model is an active user of social networks: she is registered on Vkontakte, Facebook, and YouTube. Today, she lives with her mother in the USA.

Kristina Pimenova’s net worth is reportedly $245 million in 2019.