Kaltan in the south of Kemerovo region is Aleksandr Golovin’s native town; 20 thousand people live there. It is a mono-town: a large single factory forms the economy of the town and provides the majority of jobs. Kaltan is the town of miners. Golovin’s father is a miner; his mother is an accountant.

When Golovin was 6, the father took him to his friend Aleksandr Plyasunov who worked in the Kaltan children’s and young people’s sports school. It was Plyasunov who became Golovin’s first coach.

A long time after, when the young man became famous not only in Russia but also abroad, Plyasunov marked that Sasha did not look different from other boys, yet he became passionate when training began. In the first year, the newbie learned to orientate himself on the field easily and tried to use both legs to kick. As the coach said in the Sports.ru interview, Aleksandr Golovin dreamed of playing in the Russian national team from his childhood.

At the age of 12, Golovin and his father went to Moscow for a try-out in Spartak. However, the young sportsman was considered unpromising. The rejection broke the hopes but Golovin’s tenacity remained the same: as the boy came back to Kaltan, he continued to train. Later, he was accepted to Metallurg-Zapsib soccer school and Leninsk-Kuznetsky school for prospective Olympic participants in Kemerovo region.

In 2012, there was the first moment of a meteoric rise in Golovin’s career: the coach staff of the “militarians” got interested in the player. At that time, Aleksandr was the Leninsk-Kuznetsky school student and played for Metallurg Novokuznetsk. Due to his results, he was included in the Siberian team to participate in Krymsk tournament. This is where CSKA representatives noticed him.

However, the new player was not given the chance to play at once. In 2013, Golovin demonstrated good results in games for the Russian junior team. The team won the European Under-17 Championship with Golovin taking part in all matches of the finals. Although the FIFA World Cup was not a great success for the Russian team, yet the midfielder Golovin managed to score his first goal for his country in the Venezuelan team’s gates.

In 2014, Aleksandr Golovin appeared on the soccer field wearing the red and blue uniform for the first time. As a CSKA player, he debuted in the 1/16 Russian Cup match. In the next year, he played for the “militarians” in the Russian Premier League and Champions League.

The majority of soccer fans got acquainted with Golovin after the first match for the national team. In the friendly game with Belarus, Fabio Capello engaged several new players. Golovin appeared in the second half of the game and scored at the 77th minute. In spite of this success, Golovin did not have the opportunity to play more when Capello remained the head coach of the Russian team.

The second turning point in Golovin’s career happened in spring 2016 when Leonid Slutsky became the new CSKA head. He included Golovin in the first UEFA Euro 2016 matches in the first eleven. On March 26, Golovin scored a goal in the friendly game with the Lithuanian national team.

Two weeks later, Golovin scored a goal in the match with Mordoviya. CSKA won not only the game but also the Russian Premier League; thus, this victory in CSKA was added in the list of Golovin’s accomplishments.

From that game, foreign clubs started seeking for cooperation with the promising midfielder. According to Sports.ru, his transfer was estimated at £8 million, but CSKA representatives rejected the offer. According to the commentator Nobel Arustamyan, Aleksandr Golovin’s salary is not huge by Russian standards; he estimated it was a little less than €1 million per year.

Foreign clubs are interested in the player due to the high quality of his midfielder’s work. Commentators emphasize that Golovin can see possible actions of his opponent and destroys their attacks easily. The sportsman denies he is good at one position only.

“I can play on the left, on the right, and at the center,” said Golovin in his Sport-express.ru interview. “The assistance to forwards and defense is the priority.”

The player’s advantages also include his height (180 cm. with the weight 69 kg.), endurance, and combative skills which are sometimes close to brutality. In 2017, there was an incident during the game between CSKA and Lokomotiv.

Golovin had a collision with the forward Ari; the latter was injured seriously. According to the head coach of the “railroaders” Yuri Semin, the midfielder jumped to the forwards’ legs while Ari was protecting the ball.

Aleksandr Golovin’s parents and brother still live in Kemerovo region. The player visits his native town Kaltan 2 or 3 times in a year and spends there approximately a week. He sponsors the youth tournament, gives prizes on his own behalf, and watches all the matches. Golovin continues to train even on vacation: he goes to the stadium where he used to train in his childhood.

The player does not advertise his private life, but he also tries to find a girlfriend. According to his Vk.com account, he is actively searching for a partner. His favorite games are “FIFA 13” and “Dota-2.” Aleksandr wears T-shirts with number 17 because he likes it since his childhood.

In summer 2017, FIFA called Golovin the new hope of the Russian national team. In one of his interviews, Aleksandr mentioned he did not mind transferring to an English or German club.

The soccer player guesstimated that the transfer may take place after the World Cup 2018. One can follow the sportsman’s news on Instagram: his fans often post photos related to his life. 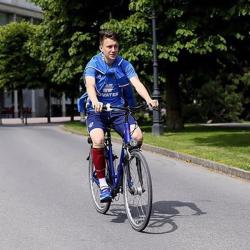