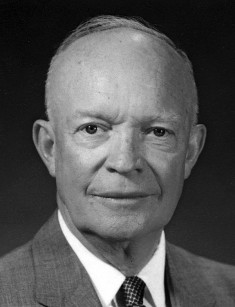 It was Dwight Eisenhower who ran the campaign for Nazi-occupied Europe intervention: he was the Supreme Allied commander on the continent. Operation Overlord began at dawn on June 6, 1944, and was a success. In 1952, the Republicans persuaded Eisenhower who commanded the North Atlantic Treaty Organization army at that moment, to run for the presidency. Dwight’s opponent was the Democrat Adlai Stevenson; Eisenhower won and was elected later for the second term (1953-1961).

Throughout his governance, Eisenhower had to take into consideration the real danger of the use of nuclear weapons; he was managing the fragile relations with the Soviet Union, finished the war with Korea, and sanctioned some international secret operations of the CIA aimed against the communist regime.

In the USA, people enjoyed their wealth. Eisenhower introduced social programs, created the system of highways, and maneuvered behind the curtains to discredit Senator Joseph McCarthy who expressed anti-communist opinions. Although President was publicly recognized, he failed at protecting African Americans and could not fulfill the mandate of the Supreme Court related to the merger of schools (1954).

Dwight Eisenhower was born in Denison, Texas, on October 14, 1890; he was the third child among the seven sons. The boy spent his childhood in Abilene, Kansas. He grew up in a poor family; very little is known about his parents. His mother was a virtuous protestant and pacifist; to her horror, young Ike (that is how his nearest and dearest used to call him) became the student of the military academy at West Point.

Eisenhower was going to Europe, but the end of the military actions broke the young officer’s plans and disappointed him. In the course of time, he managed to get to the headquarters of the Command and General Staff College at Fort Leavenworth, Kansas; he became the assistant of John J. Pershing (the commander of the American Expeditionary Force during the First World War) and later the assistant of Douglas MacArthur (the Chief of Staff of the United States Army). For four years, Eisenhower lived in the Philippines.

Soon after Nazi Germany attacked Poland and the Second World War beginning, Dwight came back to his home country. He led Operation Torch in fall 1942 and deployed troops in North Africa, Sicily, and Italy’s mainland which resulted in the fall of Rome in summer 1944.

In 1943, the Colonel General was appointed the commander-in-chief and initiated the invasion in occupied Europe in December of that year. On June 6, 1994, at sunrise, the allies crossed the channel between Great Britain and France and stormed the beaches of Normandy. Thus, on August 25, Paris became free, and it was evident who would win the war. In five years, Eisenhower was promoted from lieutenant colonel to the Supreme Commander. He came back to the USA as a hero to continue to perform his duties of the Army Chief of Staff.

In 1948, Dwight quitted his military service and became the President at Columbia University. In 1950, the short civil period came to an end: President Harry Truman asked Eisenhower to command the North Atlantic Treaty Organization army on the European continent. Eisenhower planned to create a united military organization that could fight the potential aggression of communists all over the world.

In 1952, Truman’s popularity suffered due to the continued war with Korea. The Republicans made Eisenhower run for the presidency.

At the national party meeting, Dwight was nominated for the first stage of the election; “I Like Ike” was his pre-electoral slogan. Eventually, Eisenhower surpassed Adlai Stevenson and chose Richard Nixon as his assistant. Four years later, Eisenhower also surpassed Stevenson and won his second term, although he had some health issues after a recent heart attack.

The time of Eisenhower’s presidency (January 20, 1953-January 20, 1961) is characterized by the end of military operations in Korea, warm relations with Russia, and the beginning of the American “controlling-the-world” politics.

Although the relations of the US and Russian remained relatively favorable including the meeting with Nikita Khrushchev in 1959, the hopes for peace were destroyed when the American plane U-2 was shot down by the Soviet forces.

In winter 1961, Eisenhower delivered his farewell speech; he talked about the dangers that the military-industrial complex could have to face. The needs of the defense sector correlated with the technological achievements; the former president warned that the partnership between the military complex and businesses could produce the unnecessary effect on the international politics. Unfortunately, his words were not heard, even though the cold war epoch was there.

Eisenhower governed the country for eight years; in six of them, the Democrats constituted the majority in the Congress. The moderate Republican, Eisenhower had many victories in terms of legislation. He not only continued his predecessors’ programs “New Deal” and “Fair Deal” (Franklin Roosevelt and Truman correspondingly) but also enhanced social programs, increased the minimum wage, and created the Department of Health, Education and Welfare. In 1956, Eisenhower created the interstate system of highways; he built 41 thousand miles of roads in the country.

During the first term, the Republican Senator Joseph McCarthy’s anti-communist politics violated people’s civil rights which led to a series of sensational TV announcements in spring 1954. To keep his party united, Eisenhower preferred not to criticize McCarthy publicly, even though he did not like him personally – the President maneuvered behind the curtains to decrease McCarthy’s influence and finally discredit him.

Still, Eisenhower was quite indecisive when it came to the civil rights of black people. In 1954, in Oliver Brown et al. v. Board of Education of Topeka et al., the Court decided school segregation was not constitutional. Eisenhower believed desegregation should take place slowly, and he was reluctant to use his powers to support the court decision, even though he sent the federal troops to Little Rock, Arkansas, in 1957 to control the middle school merger. In 1957 and 1960, Eisenhower signed the laws protecting black voter’s rights on the federal level – it was the first law of that kind after the Reconstruction era.

Soon after his inauguration, Eisenhower signed the truce that ended the Korean War. Except for sending the troops to Lebanon in 1958, the military forces were not used outside the US territory, although the President approved defense expenditures without hesitation. He authorized the CIA to carry out secret operations against communism in foreign countries two of which resulted in Iran’s and Guatemala’s leaders’ overthrowing in 1953-1954. In 1954, Eisenhower decided not to provide the French army with the air force support in Điện Biên Phủ in order to avoid the war in Indochina. This aid to the anti-communist South Vietnam government provoked the participation of the United States in the Vietnam War.

Eisenhower tried to improve the relations with the Soviet Union, especially after Joseph Stalin died in 1953. In summer 1955, Eisenhower offered the open-skies politics at the meeting with the world’s leaders in Geneva, Switzerland: the US and the USSR would cross-check each other’s air force programs. The Soviet Union rejected the offer despite the world approved of it. In the context of the growing Soviet nuclear weapon danger, Eisenhower and John Foster Dulles who was the United States Secretary of State succeeded in strengthening the North Atlantic Treaty Organization and creating the Southeast Asia Treaty Organization whose aim was to fight against the communist expansion in this region.

After Eisenhower graduated, he met Mamie Eisenhower in San Antonio; on February 14, 1916, he proposed to her. In this marriage, two sons were born: Doud Dwight (died of scarlatina at the age of 3) and John.

Eisenhower’s ratings were always high among his voters, and no criticism of his regime could influence it. In winter 1961, Eisenhower went to his country house in Gettysburg where he worked on his memoirs. The former American president died on March 28, 1969, after a long disease. 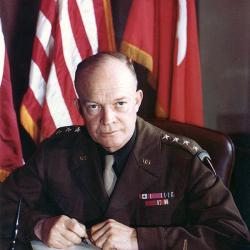