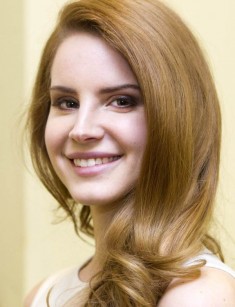 Lana Del Rey is an American singer and songwriter. The singer's tracks have become platinum in the USA and other countries of the world. The critics note girl’s artistry and cinematic character of her compositions and music videos.

Lana attracts her admirers with the melancholic mood of her compositions and flashbacks to the American pop-culture of 50-60-s of the previous century. The singer’s creative work is noted by the nominations for 28 different musical awards. Lana Del Rey received awards of some of them each year.

Elizabeth Woolridge Grant is a real name of Lana Del Rey. She was born on the border of two zodiac signs – Gemini and Cancer, on the 21st of June, 1985 in New York. The future star grew in the settlement called Lake Placid where the Winter Olympic Games took place in the thirties and eighties. Her father is engaged in the domain investing. He invests the earned millions in his daughter’s musical career with pleasure. The singer’s mother was a teacher in the high school. In Lana’s family there grew up two more children – a younger daughter Caroline and a son Charlie.

At school, Elizabeth has demonstrated an interest in the music. She liked singing in the school choir. The girl almost didn't communicate with other children. Though, she spent her time with pleasure at home watching old Hollywood movies and playing the guitar.

Lizzy Grant entered the State University of New York but didn’t leave her hobbies. She performed jazz compositions in the bars. The girl gave up her studies for the sake of music, but later she became a student of the Philosophical Faculty at Fordham University. For some time the singer was living in the trailer. As Lana told then in one of her interviews, her love for trailer houses was imparted to her by the father, who was a fan of various innovations.

The star’s managers have invented a stage name for her. By rumor, the actress Lana Turner and Chevrolet Delray car have inspired the authors for the creation of the pseudonym. But Del Rey denies this rumor. She says that she has just liked the combination which seemed to her mysterious and appropriate for the music that she performs.

Few people know that Lana Del Rey began her creative biography under her real name in 2008. Her performance as warming up for the rock band from Sweden at MTV Unplugged TV show concert became the first international appearance of the singer. Lizzy Grant’s album under the title "Kill Kill" hasn't gained popularity. The full-fledged album was on sale on iTunes during two months. Then it was removed, and it was planned to release it in 2012.

In 2011 the song "Video Games" which was presented on YouTube channel of the singer burst the music world. By the words of some listeners, Lana Del Rey took over the British performer Amy Winehouse who tragically died the same year.

For the short term, the young singer has become extremely popular. All the tickets for her first concert in New York were sold out within 30 minutes after the opening of the sales. Sometime later Tranger Records released the single "Video Games" / "Blue Jeans" in vinyl. In Great Britain, this composition has entered the ten most sold songs, and in the Netherlands, it has taken the third position.

The same year there was released a single "Born to Die." At the beginning of 2012, the new album appeared on sales under the same name. The critics have reacted somewhat ambiguously, but the public has met the album positively. The reporters predicted that the singer would easily squeeze Lady Gaga and Rihanna up in the star industry. In a way, in the sounding of Lana's compositions, one can recognize the influence of retro, lounge, dream-pop and indie-pop music. After the disc had come out, it occupied the top positions of the charts in thirteen countries of the world. In Great Britain, it was at the top of the music charts for a year.

On the 22nd of June, 2012 there was premiered Lana’s composition "Summertime Sadness." This song has got to the charts of fifteen countries where it has reached the third line. In the U.S., Germany, and Italy the original song has become platinum, and in Switzerland and Austria, it has become gold.

On the 20th of July, 2012 the music video for this song appeared on the official YouTube channel of Lana Del Rey. This video tells a story about two girls who are in love and about their tragic fate. Lana Del Rey performed one of the heroines, Jaime King played the role of the second girl. During one and a half year, the video was viewed for 120 times.

At the end of 2012, Lana has reissued her album "Born to Die" and have included nine new compositions in it.

In spring of 2013, the performer presented the song "Young and Beautiful." Lana Del Rey recorded this composition for the movie The Great Gatsby directed by Baz Luhrmann. The same year the singer released a mini-album "Paradise" and shot the short-length movie Tropico. On the 6th of December, there was released one more mini-album dated for the premiere of the short-length movie. Three songs from the album "Paradise" and a soundtrack to the movie Tropico were included to the disc.

The cover version of the song "Gods & Monsters" sounded in the fourth season of high rate series American Horror Story. The actress Jessica Lange performed this song. Later this song appeared on the iTunes website. The music critics and the songwriter have appreciated this cinematic interpretation.

The third singer’s album which came out in 2014 received the name "Ultraviolence." The director Tim Burton used the hits "Big Eyes" and "I Can Fly" as soundtracks to his movie Big Eyes. In 2015 she presented the song "Honeymoon." The track "High by the Beach" approached the top positions of the musical charts.

Lana Del Rey doesn’t change her music style even in her fourth album. She considers herself "the self-declared gangster version of Nancy Sinatra" and holds the line on this. Her music and videos are full with the flashbacks to the fifties-sixties and various pop cultures of that epoch. Her vintage image appears on the covers of the magazines. Her photos shot by her sister often appear on the web.

Many people criticize Lana's manner of behavior on the stage. For example, the famous singer and actress Juliette Lewis wrote on her Twitter that when she was looking at Lana during the performance, it seemed that she was a 12-year old girl who was pretending to be a singer in her room. At the same time, Lana Del Rey doesn’t look like a child at all. Lana is 170 cm tall, she has a womanly figure, and the performer quite often has a bright make-up on the stage

Next day in the morning Juliette Lewis changed her opinion because, when she woke up, she was singing one of Del Rey’s songs.

What about Lana, when she responds to such statements, she admits that she feels uncomfortable in communication with the press and during public speeches. She doesn’t have enough experience in this yet.

At the end of 2015, Lana Del Rey gave an interview referring to the release of her future album. The singer said that her previous albums sounded "in Californian style," but Lana planned to record her new disc in "the New York style."

In March 2016 the singer’s managers said that Lana Del Rey was recording a new disc. Since that moment there began to appear regular news and announcements about the future release.

On the 17th of February, 2017 the song "Love" recorded for the new album appeared on the web. Next day Interscope musical label released the composition as the first single.

On the 29th of March, the singer announced the title of the new album to her fans - "Lust for Life." At the same time, the new promo video of the leaving album was published on the Lana’s official YouTube channel.

A month later Lana Del Rey presented a title track of the album. The composition "Lust for Life" sounded on the air of BBC Radio 1. The song was recorded in collaboration with the Canadian musician who performs under the pseudonym The Weeknd.

Lana Del Rey released her fifth solo album in the middle of 2017. Her new creative work appeared to be successful. Her album reached the first lines of the national charts of Great Britain and the USA. After the premiere of the album, the girl went on tour in support of her new disc.

During the young years, Lana Del Rey had problems with alcohol. She calls herself "a complete alcoholic" during that period. Her parents even had to send the daughter to the boarding school. At first, she enjoyed having such "dark side," and she romanticized her bad, harmful habit. But later her "dark side" began to suppress her, and the girl didn’t like that.

Singer's engagement in charity saved her. She attended the meetings of Alcoholics Anonymous and helped homeless children. At present Lana doesn’t have any problems with alcohol.

Since Lana turned 20, she lived together with the rock singer Steven Mertens who was engaged in the promotion of her first musical compositions. They were together for seven years, but Steven didn't become Del Rey’s husband.

Some time the actress was torn between New York and Glasgow where there lived the musician Barrie- James O'Neill. They have been together for three years, and they broke up. Lana said that her depressive character became the reason for their parting.

At one time Lana Del Rey was attracted by the photographer Francesco Carrozzini. But they didn’t have serious relations.

I general, there are lots of gossips around Lana Del Rey's personality because of her love for secrecy. The girl was said to have a love affair with the actress Sarah Paulson who had earlier announced her bisexuality. Later there appeared rumors about the love affair of the singer with the actor James Franco.

In 2017 the private life of the singer was enriched with a new relationship. The rapper G-Eazy (Gerald Earl Gillum) became her boyfriend.

Young people even were going to record their joint composition "Him and I," but for some unknown reasons the couple broke up.

Lana Del Rey enjoys decorating her body with small tattoos. She has a letter "M" as a memory about her grandmother's name Madeleine, and letterings - Paradise, Nabokov Whitman, Chateau Marmont. Also, the actress has a phrase "Trust no one" on her hand and the names of her favorite singers – Whitney Amy and Nina Billie.

The creative career of Lana Del Rey is very active and fruitful. The girl already works on her sixth album. Since the beginning of 2018, she released the compositions "God Save Our Young Blood," "Blue Madonna" which she performed in a duet with Børns. Later the hit "Elvis" devoted to the king of rock'n'roll appeared in the singer’s repertoire.

At present, there began to appear joint photos with the musician and producer Jack Antonoff on the singer's pages on Twitter and Instagram. Earlier he successfully collaborated with Taylor Swift, Lorde, and St Vincent. The producer was nominated for Golden Globe Awards for two times and became the winner of the Grammy Awards for three times.

Lana Del Rey's admirers assume that the singers work on the musical material for her new album which will be produced by Jack.

In the summer of 2018, the pictures of the fatter Lana Del Rey appeared on the web. The girl has never given meaning to the criticism towards her figure. She didn’t hesitate to appear in public in the revealing swimsuits showing her tummy which was far from sporty. But the latest photos shot by the paparazzi demonstrate that the singer whose weight was 54 kilos has put on weight. 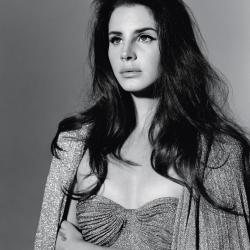