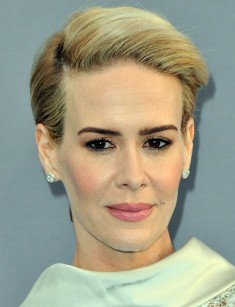 Sarah Paulson is the American actress known for her theater and movie roles. She debuted on TV in 1994 and earned her fame due to the series Law & Order, American Horror Story, Grey's Anatomy, and other remarkable projects.

There are few facts about Sarah Paulson’s childhood and adolescence. The would-be actress was born on December 17, 1974, in Tampa, Florida. The girl grew up in an ordinary family. When Sarah turned five, her parents Catharine Gordon and Douglas Lyle divorced.

After the breakup, Catharine and her daughter moved to New York; Sarah used to spend summer holidays with her father in Florida.

In one of her interviews, Paulson mentioned she took an interest in acting from the early childhood. When she was a school student, she never missed the opportunity to take part in improvised performances and tried to gain every role, even a minor one.

As soon as Sarah realized she wanted to devote her life to acting, she sent her documents to the colleges she wanted to enter. In the end, the young woman achieved her goal and continued her education at the American Academy of Dramatic Arts where she mastered her acting skills.

Sarah Paulson was a lucky person: she did not have to go to endless auditions and be rejected. In 1994, the ambitious young actress debuted in the police series Law & Order. Soon, she got the role in the iconic horror series American Gothic (1995-1996). It was the story of the “part of that power which eternally wills evil and eternally works good”: the sheriff of a small town (Gary Cole) turned out to be the snake of temptation.

In 1997, Paulson took part in the drama Levitation; the next year, she got the role in the adventure movie The Long Way Home about the pensioner who goes hitchhiking from Kansas to California.

The famous fantasy melodrama What Women Want (2000) became the new page of Paulson’s acting career. The movie tells the story of the womanizer Nick Marshall who gains the superpower after an accident: he learns how to read women’s thoughts.

However, the main character views this gift as the punishment. Mel Gibson, Helen Hunt, Marisa Tomei, Alan Alda, and other outstanding Hollywood stars appeared in the project.

In 2003, Paulson participated in the romantic comedy Down with Love; Renée Zellweger, Ewan McGregor, and Rachel Dratch were her colleagues.

Besides, the talented actress appeared in Swimmers (2005), Serenity (2005), The Notorious Bettie Page (2005), Diggers (2006), and Griffin & Phoenix (2006). In 2006, Sarah also got the lead part in the comedy A Christmas Wedding. The main character Emily wishes to marry on Christmas by all means; however, the circumstances of insuperable force may ruin the young woman’s plan at any moment.

Later on, Paulson turned into a TV presenter in the series Studio 60 on the Sunset Strip (2006-2007); for this work, she was nominated for the Golden Globe Award.

In 2008, Sarah Paulson played the role of Ellen Dolan in Frank Miller’s The Spirit. The movie presents the story of the superhero Denny (Gabriel Macht) who wears a mask and fights the criminal world under cover of night. Samuel L. Jackson, Scarlett Johansson, Eva Mendes, Jaime King, and other actors took part in the project.

In 2009, the American actress took part in the series Cupid and played the psychologist Claire. In 2011, Sarah Paulson, Elizabeth Olsen, John Hawkes, and Hugh Dancy co-starred in the drama Martha Marcy May Marlene.

American Horror Story appeared on TV on November 5, 2011. This series was intended for those who liked being thrilled; the audience loved the fact that each season started with a blood-curdling tale with the original beginning and ending and was allegedly based on true stories. This popular project brought Sarah Paulson four Emmy nominations and the Saturn and Critics' Choice Television Awards.

For example, the first season of the horror starring Zachary Quinto, Taissa Farmiga, and Evan Peters, tells the story of the malicious house murdering people, and the second one is set in the mental hospital.

In Freak Show, the fourth season of American Horror Story, Sarah Paulson personified two characters: the conjoined twins Bette and Dot Tattler who had one body and two heads. While Bette was a dreamy person who was always looking for adventures, Dot was a conservative woman longing for the calm and ordered life.

Sarah Paulson’s bisexuality is not a secret: the actress does not cover up her relationships with women. For some period, Sarah was seeing the playwright Tracy Letts; they were engaged but eventually broke up.

When Sarah announced she had a relationship with a woman, many fans believed that the singer Lana Del Rey was her girlfriend.

In fact, Paulson was dating the actress Cherry Jones who was openly gay. The women did not hide from paparazzi and often visited social events together. In 2009, they broke up.

The American actress and the Emmy Award winner Holland Taylor became Sarah’s next lover; Taylor was 32 years older than Sarah.

Sarah Paulson is an open person who gladly communicates with reporters and answers followers’ questions in social networks. There are many photos with fans on the actress’s Instagram and Twitter pages. Besides, Sarah Paulson is on friendly terms with her colleagues Amanda Peet and Pedro Pascal.

Sarah has several tattoos. She has aviophobia and adores pets, particularly dogs.

By the way, Sarah Paulson smokes in real life. Kathy Bates joked in one of her interviews: while Lady Gaga was busy working (she appeared in the fifth season of American Horror Story), Paulson was busy smoking.

In 2017, Sarah participated in the movie The Post about the journalists who dared to publish the classified documents. The next year, the actress appeared in Ocean’s 8 with Cate Blanchett, Anne Hathaway, Helena Bonham Carter, and Dakota Fanning. The premiere of the actress’s next movie Glass is expected in 2019. 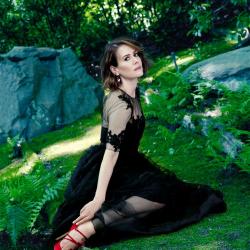