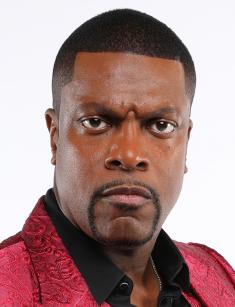 Like many African American actors, Chris Tucker began his career with stand-up performances. The young man became famous in the late 1990s when he appeared as an eccentric presenter in The Fifth Element. Now he has several film awards, and Tucker received one of them thanks to the movie duo with Jackie Chan.

Chris spent his early years in Atlanta. The future actor was not different from his peers. Tucker’s family had six children. A devout mother, the wife of a small cleaning company owner, often took them to church. She sang in the local choir and tried to involve the children in it. However, frequent church services did not make Chris religious. The boy wanted to be different from the rest of the children, to be in the center of attention. One day he realized that the best way to attract attention was a sense of humor.

Chris did not study well but went in for sports such as boxing and football. The actor still keeps fit. He is 6.07 ft. (185 cm) tall and weighs 176.37 lbs. (80 kg). Tucker didn't dream of becoming an athlete. He liked less thorny paths to the stardom. Tucker made his debut as a stand-up comedian at the prom. His peers loved the performance, and Chris decided to become a famous comedian by all means.

First, Tucker performed at the club in Atlanta. On weekends, his simple jokes attracted a lot of viewers. Chris decided to move to Los Angeles because the most famous stand-up clubs were located in this city. However, the ambitious young man was disappointed when he moved to the center of the American show business. But, he quickly coped with it.

The young man from Atlanta fell on his face during the first performance at a club in Los Angeles. Impartial judges did not find him funny. Chris was not in despair. Besides, when he was leaving the club in which he failed, the man saw the announcement of stand-up comedy audition.

Without thinking twice, Chris went to the audition. This time he was lucky. Since the late 1980s, Tucker's biography has included a series of happy coincidences. For three years, Chris performed with Bernie Mac. Then he decided to try his hand at acting.

The first project was the drama Menace II Society, in which Tucker played a negative character. Both critics and viewers received the film positively. But few people paid attention to the novice actor who performed the role of an addict.

The unsuccessful comedy House Party 3 was the second project in Tucker’s filmography. In the next film, Chris played an addict again. But this role made the actor famous.

Friday shows one day in the life of two unemployed guys. Tucker played the role of Smokey convincingly. So, it is not surprising that later the actor often portrayed antisocial personalities. Chris’s hero has a significant name. Smokey is keen on special smoking mixtures but is short of money, which became the basis for the comedy story.

In 1995, the actor was involved in the shooting of three films. Besides Friday, he played in Panther and Dead Presidents. In the first movie, Chris got a minor role. In the second one, he was a member of the gang, hunting for "dead presidents," the so-called cash in American crime rings.

The roles in the films of the mid-90s did not make Tucker famous, but the fantasy action movie that grossed $ 263 million in 1997 was an exception. After the release of Friday, people began to recognize Chris on the street. But he dreamed of world fame. Another stroke of luck was not long in coming. In The Fifth Element, the actor created the most memorable character of Ruby Rhod.

He outperformed other heroes wearing an extravagant suit with a mannered hairstyle and behaving extravagantly. But experts did not appreciate the efforts of the rising star. Tucker received the Golden Raspberry Award.

In 1997, Chris played in two more films. One of them was Jackie Brown. Tucker worked on the set together with world-famous stars again. When the actor was offered a role in the action movie Rush Hour, he agreed but demanded an income of three million. The actor duo of the 44-year-old stuntman, the star of action movies, and the 27-year-old comedian helped the film to gross $ 240 million. However, the comedy has a trivial plot as well as many smash hits.

The needs of Tucker, who was drunk with success, increased rapidly. When three years later Brett Ratner decided to make a sequel, Chris demanded $ 20 million. The director agreed. By the way, initially, Ratner wanted to see a more eminent dark-skinned comedian, Eddie Murphy, as James Carter. But he could not make an agreement with the star.

The last part of the police trilogy was released in 2007. Tucker's earnings were $ 25 million. Chan was paid 15 million for the second and third parts. For seven years, Tucker managed to earn good money; therefore he decided to take a break from acting. Next time he appeared on the screen in 2012.

In the early 2000s, the actor starred in Michael Jackson’s music video, which resembles a short film. Tucker made friends with the King of Pop. In Rush Hour 2, the actor parodied Jackson’s style of dancing. The actor’s friend was also Bill Clinton, with whom he traveled abroad. In the 2008 presidential election, Tucker supported Barack Obama.

The actor has a son, Destin, who lives in Los Angeles with his mother. There is little information about Tucker's personal life. There are no photos of his girlfriends on Instagram. Either the actor is not going to change his bachelor life, or he carefully hides his privacy from the eyes of journalists and fans.

Tucker's photos often appeared in the press in 2014 due to an unpleasant, but a rather typical story for show business. It became known that Chris spent the millions he earned together with Chan. But the actor forgot to pay taxes on time. Tucker repaid a fine of $ 2.5 million; thus, he had to sell part of his property.

The actor participated in the documentary film about African-American history. He learned that his ancestors were Africans, Europeans, and Indians. The actor agreed to take a DNA test, and a summary of his family tree was shown in the film African American Lives. Tucker flew to Angola, his historical homeland, together with the film crew.

In 2017, it became known that Ratner was going to shoot the fourth part of Rush Hour. Tucker's famous partner is already over 60. It is unknown whether he can fight fictional criminals as quickly as he did it in 2007. But the director is optimistic. Arthur Sarkissian, the producer of the action film series, reported that Tucker agreed to act in the next sequel in 2009.

However, the actor said:

"We waited for the third Rush Hour for six years, and I think that Jackie will be tired of another six years of waiting."

The film is expected to be released in 2018. Perhaps, it will also be shot in Moscow. However, Ratner said two years after the release of the third part that the action in the comedy would take place in the Russian capital. His plans could have changed many times since then. In 2019, the continuation of the comedy film Friday, which made the actor famous, is also planned to be released. The tentative title of the sequel is Last Friday.