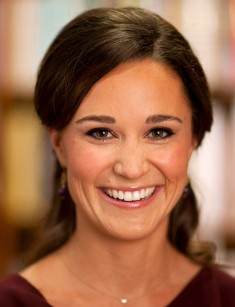 Pippa Middleton is a younger sister of the Duchess of Cambridge. During all her life people said that she would have an unenviable destiny. People considered that she always was in the shadow because of her elder sister. But Pippa didn't agree to have a second lead and did everything possible so that people knew her and remembered her.

Every day her name is mentioned in the news for different reasons. Once, she released a new book, another time she got engaged in the charity activities, or she broke up with her boyfriend and then was in a company of her new beloved. Her life is active, full of events and gives lots of reasons and news to discuss.

Philippa Charlotte Middleton (real name of Pippa) was born in the ordinary family which didn't belong to the British nobility on the 6th of September, 1983. She is 166 centimeters tall, and she weighs 53 kilos. Pippa has a sister - world-famous Duchess Pippa and Catherine Middleton and a brother James Middleton. Pippa's father came from the middle class, and her mother originated from the old family of the coal miners.

They worked in the civil aviation: her father was an air traffic controller, and her mother was a stewardess. When Pippa turned four years old, her parents founded parcel services company under the name of "Party Pieces". This company successfully developed on the British market and brought unprecedented profit to the family, at the same they became millionaires.

Sometime later the family of Middleton decided to buy a big house in the district of Ashem Stead, and they moved there. At this new place, the girls went to the particular school for girls where they received a sports grant. After Pippa had left school, she entered Marlborough college where she studied for a short time. Later, she moved closer to her sister to Scotland.

Here Pippa chose for herself the studies of Literature. After she had received an education, she managed to work for a short time in the small company which was engaged in the promotion of luxury goods. After Pippa had left this firm, she worked in the company which organized celebrations and events. It was Pippa that, who held the after party at the wedding of her sister. Anyway, later Pippa left this organization and got engaged in her family business.

Everybody knows that Pippa has become popular first of all due to her sister - Kate Middleton. In a short time, the whole world has known about this family. And though their family was rather wealthy at that time, they could only dream about such property as they have at present.

It was precisely after the wedding of Kate Middleton and Prince William when the whole world paid attention to Pippa. She found herself in the center of attention due to her shapely figure, slim legs, and well-chosen dress. She even overshadowed her sister who was the bride that day.

It is eviden,t that Pippa likes so much to organize different events. She is engaged in this kind of activity at present. Besides, the girl is involved in the charity; she is an editor of the magazine, she writes cooking books. Moreover, she runs a business and goes in for sport. It’s hard to imagine how the young girl manages to find time for everything. Also, Pippa designs exclusive bags and fashion clothing line. It seems that she has covered all possible kinds of occupations.

Pippa has been an ambassador of the British Heart Foundation for a long time. Here she helps to raise money for the people who need some expensive operations. Pippa presented her cooking book and transferred all the money from the sales to help sick children. Also, she puts up her things and clothes at charity auctions.

Every day Pippa shares all the events in her life on Instagram. Having looked at her photos, you’ll understand that the girl has an active lifestyle, eats appropriately and goes in for sport and has an exquisite taste.

Pippa often becomes the center of attention because of her scandalous actions. Just her scandalous photos where she takes off her swimsuit, where she dances half-naked in the company of the man, or takes off her dress and at the same time wrapped herself in the paper are worth attention. By the way, her last stunt became the final straw in the patience of her would-be groom Alex Loudon.

Pippa Middleton has a very full and active private life. In her student's years, she had a love affair with George Percy - the son of the Duke of Northumberland. The guy possesses a title, and one day he will inherit no less 500 000 million pounds from his father. He is considered to be one of the most demanded and desired grooms. Their love affair was passionate but didn’t last for long. To be with Percy, Pippa neglected the relationship with her previous admirer with whom she had been together for three years.

In 2008 Pippa began a love affair with Billy Moore Nesbitt who belongs to the Scottish aristocracy. But soon she broke up with him. After him, she had relations with the successor of the diamond empire - Simon Youngman. The girl was somewhat satisfied with this candidate, but the successor wasn't ready to have serious relations. At the same time, the girl was choosing between Alexander Spencer-Churchill and Charlie Gilkes. The first one is the nephew of the Duke of Marlborough and the relative of world-famous Sir Winston Churchill; the second one is the real playboy and the owner of the nightclub.

The girl would choose the partner if she didn’t fall in love one day with the ordinary guy Alex Loudon.

He belonged to the ordinary family and couldn't offer anything extraordinary to his beloved woman. But Pippa didn't pay any attention to this fact. All the friends and relatives repeated that this relationship wouldn’t last for long. Nevertheless, a year and a half later Pippa appeared at her sister's wedding in the company of Alex.

By hearsay, the young man was going to make her a proposal but they severely quarreled at Kate's wedding, and he hasn't made the proposal. It was Pippa's too open flirtation with Prince Harry which became the reason for their quarrel. After the emotions had passed, the girl wanted to reunite with her beloved man, but he turned out to be the man of his word. Tom Kingston, Nico Jackson, Chace Crawford were also among Pippa’s boyfriends.

At present, there is information, according to which Pippa Middleton is going to get married. The financier James Matthews will be her husband. He is handsome and, and he demonstrates this with pleasure. For the engagement, the groom presented to his beloved woman the diamond ring which costs 250 thousand pounds. Their wedding will take place on the 20th of May, 2017.

On the 20h of May 2017, Pippa Middleton got married to James Matthews. The wedding of the loving couple took place in the English county of Berkshire. Pippa and James got married in Anglican St. Mark’s church in the territory of the private Englefield Estate. After that, there was a banquet at Middleton’s Estate.

The public has separated in two camps: some people imitate Pippa Middleton, and other people don't understand the reasons for such popularity. Her admirers observe all the changes in her life with pleasure. Moreover, they copy her outfits, hairstyles, hair color, even address plastic surgeons to have "Pippa’s bottom". The opponents notice that sometimes the girl looks carelessly and that she is tasteless and has problems with her style. 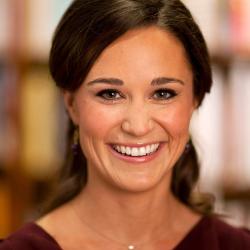