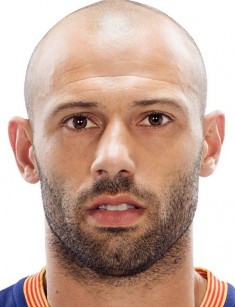 Javier Mascherano has played for the Argentina national team more often than any other team member. By the end of June 2018, his statistics were recording: 146 matches. As for the number of goals, the player’s results look like the anti-record: only three goals. The club career has not been impressive as well: three goals for 15 years.

Nevertheless, no statistics prevented “the Little Chief” from spending three seasons in Liverpool and eight seasons in Barcelona. Mascherano is a true warrior who can protect the ball until the end and pass it to his teammates accurately.

The future defender was born on June 8, 1984, in the small town San Lorenzo, Santa Fe Province. This region is the motherland of many soccer stars including Gabriel Batistuta and Lionel Messi. Javier’s grandmother from the paternal line was born in Spain and lived there for some time; later, she moved to Argentina. Thanks to soccer, her grandson came this way back.

Javier took fancy in soccer early. At four, he began to train in the club San Lorenzo Cerámica. As the player’s mother said in one of her interviews, the majority of children accepted to the club were five or six years old. Thus, Javier had to play against older kids.

At ten, Mascherano joined another town club, Barrio Villa.” The French midfielder Claude Makélélé was the boy’s icon: as Javier was learning how to play, he tried to imitate Makélélé’s style.

These attempts proved to be useful. The scouts of Renato Cesarini used to visit Barrio’s games; one of them was so impressed with the 14-year-old player’s talent that he offered to enter the club’s youth academy. However, the parents’ permission was required: the team’s base was in Rosario, the third largest city in Argentina. Mascherano agreed. In the next year, he was included in the River Plate youth team.

The Argentina national team representatives noticed the young player’s success. From 2000, Mascherano played in junior teams; in 2003, he debuted for the main team in the friendly game with Uruguay. Surprising as it may seem, Mascherano had not played for River Plate by that moment: the coach took his time to let the 19-year-old defender play.

The debut occurred in August 2003: River Plate defeated Nueva Chicago. For two seasons, Mascherano had 46 matches and scored in one of them. In 2004, Marca predicted the promising player could reinforce Barcelona or Real Madrid.

The sportsman’s position improved after the Olympic Games in Athens. In the Argentina national team, Javier won the gold medal. In 2005, the Brazilian club Corinthians announced it was ready for the defender’s transfer.

Soon after that, Mascherano had his first serious injury: as he collided with the opponent during the match against Porto Alegrense, he had a fraction in his left-foot navicular bone. It took the sportsman more than six months to recover. However, he managed to win the victory in the Campeonato Brasileiro.

After the FIFA World Cup-2006, West Ham United bought the 22-year-old player. Javier played only five games there and transferred to Liverpool in the next season. In Liverpool, he was wearing number 20. In spring 2008, the Argentinian scored his first and last goal in the match against Reading; he kicked from 20 meters.

The next match provoked the ambiguous reaction among fans and the club management. As Mascherano got a yellow card, he started arguing with the referee which led to being off. The player continued to boil over, and he was disqualified for three games; besides, he was fined. Still, Liverpool did not want to fire the talented defender.

In 2010, Mascherano transferred to Barcelona; the Catalonian paid £ 22 million to Liverpool, and the player’s salary was € 5,5 million. Mascherano called the transfer the dream that came true. He realized he would be exhausted by training and long adaptation to the team’s style, but he was determined to give himself to the team completely just as he had done in previous teams. The player wanted to help his new club sincerely.

The debuting game against Hércules was the failure for Mascherano and Barcelona. The new player was sent off the field for arguing with the referee, and the Catalonians lost. To fans’ surprise, the coach changed Javier’s position and moved him to the defense center. Everybody expected more rule-breaking, but they were wrong: the team’s discipline improved, and Mascherano had only seven yellow cards during 38 matches of the entire season.

Although Javier Mascherano did not become the first eleven member, he played full-time in the most significant matches of Barcelona. In 2011, the Champions League final game was such a decisive moment. Mascherano and Gerard Piqué were working on the central defense.

The score was 3:1; it brought the Argentinian the first European trophy and the chance to play all 90 minutes in Supercopa de España and UEFA Super Cup games. Apart from Mascherano, only the captain Lionel Messi, the defender Éric Abidal, and the goalkeeper Víctor Valdés had achieved the same result by 2011.

In 2014, Barcelona named the “Little Chief” the player of the season. In a couple of years, Mascherano was appointed the third vice-captain after Andrés Iniesta and Sergio Busquets. The sportsman played 203 games for Barcelona and scored only one goal in spring 2017 during the game against Osasuna. In addition, he had four own goals.

In January 2018, rumors had it Mascherano was going to move to China. The defender finished his career in Barcelona and joined Hebei China Fortune (founded in 2010). Mascherano is one of the seven legionnaires supporting this team.

Javier’s height is 174 cm. which partially explains his nickname “the Little Chief”; his weight is 73 kg.

Mascherano and the Argentina national team took part at the FIFA World Cup-2018. The match between Argentina and Iceland ended in a draw. Croatia crushed the Argentinian team, but the latter gained the victory in the game with Nigeria.

Javier Mascherano admired the Spanish team’s defense density and emphasized that his teammates had the chance to score only standard goals. The player was the only one who commented the team’s spirits after the defeat by the Croatia team: he said people felt empty and had just to overcome it.

Despite the ambiguous performance at the group stage, Argentina managed to get to the play-off where it was defeated by France. Javier Mascherano announced he finished his national team career. 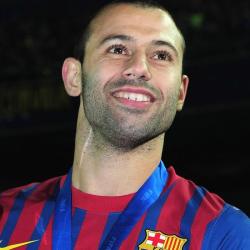