Edison Cavani is, undoubtedly, one of the most popular forwards. With his hard work and tenacity, the sportsman has become the most successful Uruguayan player in the history of Italian championships. His statistics are genuinely impressive. Edison is so famous that even a pizza in Napoli has been named “El Matador” after the player’s nickname.

Edinson Roberto Cavani Gómez was born on February 14, 1987, in Salto, the second largest city in Uruguay. Edison’s family came from Italy: the grandfather was born in Maranello and later moved to Sicilia when he was an infant. In 1929, he migrated to Argentina and later to Montevideo.

Cavani’s father Luis was a professional soccer player and participated in several matches for the Uruguayan national team. Edison’s mother’s name is Berta Gómez. Edison has the brother Christian who used to be a defender and the stepbrother Walter Guglielmone who played two games for the national team.

When the boy was small, his father and brother instilled the love of sports in him. Edison could spend hours playing soccer; at nine, he could win over elder boys. The forward Gabriel Batistuta was the boy’s icon.

Cavani’s soccer career began in Salto. Metropolitan clubs noticed the young man quickly but he took his time to transfer. When Cavani was only 12, many clubs from Montevideo invited him, but the father recommended to hold off for a while.

Later, the player moved to Montevideo where he got accepted to Danubio. In 2006, the sportsman debuted in the first eleven and won the Apertura in the Uruguayan Primera División together with his club. At the beginning of 2007, the young man joined the Uruguayan youth national team in the Copa América. Cavani became the best attacking player in the tournament; his team came in third.

In January 2007, the President of Palermo announced the promising contract was going to be signed. In Palermo, Cavani debuted on March 11, 2007: he stepped in for another player and scored the first goal in the tournament in 15 minutes.

In February 2008, Edison Cavani played the first game for the Uruguayan national team against Columbia and scored the first goal.

Two years later, Cavani decided to leave Palermo and join Juventus or Chelsea. Still, in March 2010, the player extended the previous contract until 2014. According to the document, a club would have to pay € 25 million to buy the player.

In May of the same year, Rubin Kazan and Shakhtar Donetsk gave their offers. In a month, Manchester City was ready to pay €19 for the transfer. CSKA Moscow was also interested in the player. In June 2010, Edison joined Napoli: the club loaned him for €5 million with the next purchase for €12 million.

In November 2012, the head coach of the London club Arsenal Arsène Wenger showed his interest in the Uruguayan player and wanted to buy him for £ 30 million. Other clubs also took an interest in the player, but Cavani signed the five-year contract with the French club Paris Saint-Germain; the transfer cost was €64 million.

In August, the French club played with Montpellier; Cavani debuted in this game. On August 18, he scored the first goal for the team against Ajaccio. The forward became one of the leading members immediately; his duo with Zlatan Ibrahimović was a mighty force. However, the Uruguayan often stayed in the shadow.

In summer 2016, Cavani became the attacking leader of the team; the Trophées UNFP du football confirmed his leadership. Moreover, in the 2017-2018 season, Edison was named the best attacking player in the history of Paris Saint-Germain.

At the FIFA World Cup 2018, the duo of Edison Cavani and Luis Suárez is considered the best; Suárez has been playing in Barcelona since 2014. During the game with Ireland, the Uruguayan forward was injured and left the field at the 12th minute when he started limping after the sharp acceleration.

In the game against Olympique Lyonnais, Cavani and Neymar had a conflict: they could not decide who would take the penalty and grabbed the ball from each other. The argument continued in the locker room and finished in a while.

Edison celebrates his goals in a spectacular way: the forward points the imaginary gun at the opponent and “shoots” them.

Once, a strict referee did not appreciate the player’s “performance” and issued a yellow card. Cavani did not expect that and rushed to the referee, took his arm, and received another yellow card so that he had to leave the field early.

In 2013, Edison announced he divorced; according to María, the player’s unfaithfulness was the reason. By that moment, their son Lucas had been born. The woman said she tried to save the family, but all attempts were futile.

María and Edison got divorced through the court. The player was obliged to pay €25 thousand per month to support his former spouse and the children.

After the divorce proceedings were finished, journalists suggested that Edison would start dating Maria Rosaria Ventrone, the woman who caused the player’s divorce. However, things were different. It was the beautiful Uruguayan samba dancer Jocelyn Burgart who became the sportsman’s new girlfriend. Edison and Jocelyn go together everywhere including matches and celebrate their best moments. The media watch the couple with great interest.

At the FIFA World Cup 2018 in Russia, the Uruguayan national team defeated Egypt; the score was 1:0. At the end of the match, Edison and the Egyptian player Mohamed Salah who did not play at that game exchanged their T-shirts. As Cavani explained later, he took Salah’s T-shirt as the present for his children.

Edison’s contract with Paris Saint-Germain will expire in summer 2020. The player gains €13,2 million per season. In summer 2018, Cavani’s double saved the team from the domestic loss in the match against En Avant de Guingamp.

Cavani’s height is 184 cm.; his weight is 71 kg. The preferred foot is right. On the official Instagram account, there are many photos and videos from various events in the sportsman’s life. 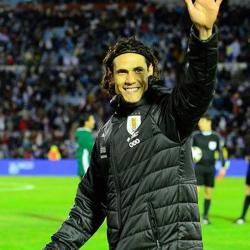