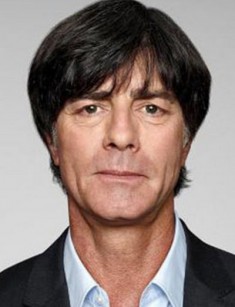 During the world’s tournaments, the coach of the Germany national team Joachim Löw turns into a perfect news-maker. In 2016, Germany created a sensation and crashed the host team, Brazil, to defeat Argentina in the final game.

Four years later, the German team suddenly left the championship: for the first time in the last 20 years, it could not qualify from the group. In the last 12 years that Löw has been coaching the team, Germany was always in the top four teams in all FIFA World Cups. For this reason, the German Soccer Association tolerated the defeat and extended the contract with Löw until 2022.

Joachim Löw was born on February 3, 1960, in Schönau. The small town where some two thousand people lived had its own soccer team, and Joachim and his brothers took an interest in soccer since their childhood.

There were four sons in the family. Joachim’s father worked in a kiln workshop and governed a small group of people. The father supported his son’s soccer enthusiasm. At his fifth birthday, the boy received the first pair of boots from his father.

For a long time, the ball was Joachim’s favorite toy. In one of his interviews, the coach remembered he always washed it after each practice and went to bed with it.

Young Löw played for the local team. As he finished school, he entered the economic university in Freiburg. The soccer player’s career began in that city’s team.

As a player, Löw had only individual achievements. Freiburg never left the second division, but the attacking midfielder Joachim Löw scored 12-15 goals per season and earned fan’s admiration.

After two seasons in the first club, the player transferred to Stuttgart in 1980. However, he played in only four games and scored no goals. Throughout the decade, Löw changed clubs five times and returned to Freiburg twice. Still, he could not reach Bundesliga.

In the early 1990s, the sportsman played for Swiss clubs. Schaffhausen was the first one: it was the oldest club in the country founded in the 19th century. Löw joined the team in 1989. Roberto Di Matteo played in the same team; later, he became famous as the coach of Aston Villa, Chelsea halfback, and the Italian national team former member.

In 1992, Löw transferred to the second-division Winterthur. In 1994, he began to coach the club’s youth team. In fall of the same year, he left the club and signed the contract with Schaffhausen. He had one season there and announced he finished his field career. 34-year-old Löw chose the coaching career.

Löw’s club career period lasted for ten years. He became famous when he signed his second agreement. He worked as the assistant of the head coach of Stuttgart for a year and took this position when Rolf Fringer began to coach the Switzerland national team. While Stuttgart was an intermediate stage for Löw the player, Löw the coach earned his fame in this club. In 1997, the team won DFB-Pokal; in the next year, Stuttgart reached the UEFA Europa League final but lost to Chelsea.

In late 1990s, he signed the consecutive contracts with Fenerbahçe, Karlsruher, and Adanaspor, but there were no outstanding success or failures with any of them.

Working with Tirol Innsbruck was one of the bright stages in Löw’s career in 2001-2002. Under his governance, the team won in the Austrian Football Bundesliga for the third time. At that period, Stanislav Cherchesov, the future coach of the Russia national team played for the club.

Despite the three-year success, the administration of the club declared Tirol bankrupt. Later, the presidents of the club were in the criminal corruption case.

In the last season of his club career, Löw was the coach in Austria Wien.

In 2004, the coach of the national team changed: Jürgen Klinsmann, the “gold goal scorer” beloved by everyone took the position, although he had no coaching experience. He invited Löw whom he had known from the coaching school; Joachim gladly accepted the offer.

The domestic Confederations Cup was the first ground to have the work checked. The German’s style based on sharp attacks helped them score 15 goals in five matches, but it was not enough for the victory. The team defeated the Mexican national team and placed third. In the home World Cup 2006, they also got the bronze.

After the World Cup, Klinsmann did not wish to extend the contract. He spent two years outside the world of soccer and then signed the agreement with Bayern Munich. As expected, Löw took the position. He kept the renewed team and 4-4-2 scheme implying the attacking style. The decision proved to be right.

In 2008, Germany reached the final of the European Championship where it lost to Spain; two years later, the team won the FIFA World Cup bronze. In the next Euro, they also placed third. It was 2014 that brought Germany the long-awaited triumph.

The events of the World Cup were unexpected for everybody, particularly the host country. In the semi-final game, the Brazilians missed seven balls from Germany. In the final match, Löw’s mentees faced Argentina. The Chancellor of Germany Angela Merkel accompanied by the Russian President Vladimir Putin and other high-ranking bureaucrats watched the game.

The shutout game lasted for a long time. At the 113th minute, Mario Götze scored the decisive goal which made Germany the FIFA World Cup winner for the fourth time in the history.

Joachim’s fame was incredible; FIFA named him the best coach of the year. Two years later, Germany won the European Championship bronze medal again. In 2017, the renewed national team performed at the FIFA Confederations Cup IN Russia successfully and won the main trophy. Under these circumstances, the failure in the next World Cup was shocking.

When Löw was a student, he met his future wife. To his surprise, the President soccer club he had just joined turned out to be the young woman’s father. The marriage lasted for 30 years, but in 2016, the couple divorced. Joachim moved to the apartment not far from the capital; Daniela stayed in the country house. Daniela and Joachim had no children.

The coach’s love of bright and fashionable clothes provoked rumors about his orientation. However, he never hesitated to deny them in his interviews. Besides, the coach of the Germany national team collects watches; his style of driving is quite aggressive; the police took out his driver’s license for speeding twice.

“One Flew Over the Cuckoo's Nest” is the sportsman’s favorite movie; Jack Nicholson is his favorite actor.

Joachim Löw met Angela Merkel several times; they talked not only about soccer but also the situation with migrants and Greek economic problems.

As soon as the Germany national team lost to South Korea in the FIFA World Cup group stage and failed to get to the play-off, rumors had it Löw would be fired. He was said to become the head coach in Arsenal.

However, no resignation folLöwed; Löw’s contract has been extended until 2022, just as the agreement with his assistant Thomas Schneider. According to Sovetsky Sport (Soviet Sport), the coach’s salary was € 3,85 million in April 2018. 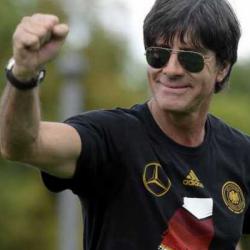