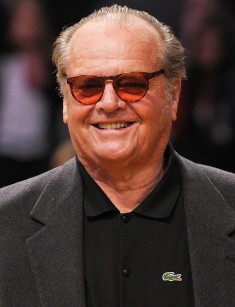 Jack Nicholson is an American actor, movie director, producer, and scriptwriter. He has been nominated for Oscar 12 times which is a record.

Jack Nicholson was born in New York. The dancer and singer June Frances Nicholson was the future star’s mother. Jack’s father was probably the musician Donald Rose Furcillo, although there is no documentary evidence to support it.

The boy was brought up by his grandparents – Ethel May Nicholson and John Joseph Nicholson. Jack was named in honor of his grandfather. For a long time, the Hollywood actor was sure that Ethel and John were his parents. Only when he turned 37, he learned that his real mother was the woman he considered to be his elder sister.

The boy spent his childhood in the town Neptune, New Jersey. Jack went to the Theodore Roosevelt Elementary School where he took part in the amateur musical performance for the first time. Jack played the jazz composition “Managua, Nicaragua.” As a teenager, the would-be star was overweight, and he had a humiliating nickname “Fat Jack.” The boy took up sports, got interested in basketball, baseball, and football. Besides, Jack was a journalist in the school newspaper and took part in theater performances. One of them, “The Curious Savage,” brought the student the title of the “best high-school actor.”

At 18, Jack Nicholson made the final decision to devote his life to acting. To come to the movies’ world as close as possible, Jack moved to the big city and got hired as a handyman in the cartoon department of the company MGM. In 1956, Jack had his first auditions. Those who were present liked the young man’s smile and manner, but his accent shocked them. Nicholson took up acting classes. As a result, he got a minor role in one episode of the series “Matinee Theater” and took part in the play “Tea and Sympathy.”

Nicholson’s first movie role was Jimmy Wallace in the thriller “The Cry Baby Killer” that became a total failure. There were other disastrous works: “Drive Angry,” “Too Soon to Love,” and “The Little Shop of Horrors.” The latter was created in two days, and its movie budget was $27 thousand. However, having played the careless Wilbur Force, the young actor drew attention to himself. Soon, Nicholson was offered to play in the movie “The Raven” based on Edgar Poe’s poem and the horror “The Terror.” It is funny that the actor had similar costumes in both projects, and the decorations were identical.

Next time, Jack Nicholson caught the public eye after the movie “Easy Rider” was out; the movie “Five Easy Pieces” brought the first Oscar nomination as the best actor. At that period, there were other interesting works, such as “The Last Detail” and “Chinatown” that, again, gave Nicholson new Oscar nominations.

The audience marked the movie “Chinatown” that was shown in movie theaters in 1974. Roman Polanski’s movie is set in the 1930s Los Angeles. The private detective Jake Gittes played by Nicholson is involved in the large criminal syndicate secret schemes investigation. In this movie, Faye Dunaway who had already had been nominated for Oscar for “Bonnie and Clyde” was Jack Nicholson’s partner. Besides, Nicholson took part in the musical “Tommy” and the philosophical drama “The Passenger.”

In 1975, the screen adaptation of the iconic American novel of the new generation “One Flew Over a Cuckoo’s Nest” was out. Jack Nicholson got the leading part of Randle Patrick McMurphy. This movie was called a real breakthrough in the actor’s biography. This role brought the actor his first Academy Award for Best Actor. After the success, the actor had various attractive offers, such as Michael Corleone in the blockbuster “The Godfather,” but Jack rejected them. The actor said that he was not interested in the roles destined to be a success at that time. On the contrary, the actor would choose the least commercially attractive figures to challenge himself. For example, Nicholson played a communist in “The Last Tycoon,” the horse-stealer in the western “The Missouri Breaks,” a criminal loser in the comedy “Goin’ South.”

The next outstanding work by Nicholson was the Stephen King’s novel adaptation “The Shining.” The famous director Stanley Kubrick was the creator of the movie. The actor did not receive any awards for playing Jack Torrance, but this image is considered one of the best in the star’s filmography. The actor got the second Oscar – the Academy Award for Best Supporting Actor – for his role in the melodrama “Terms of Endearment.”

The chain of successful movies followed: “The Postman Always Rings Twice,” “The Witches of Eastwick,” “Prizzi’s Honor,” “Reds,” and “Ironweed.” For the latter three movies, the actor was nominated for Oscar.

In 1989, Jack Nicholson was again much spoken about – he starred in the screen adaptation of the comics “Batman.” His interpretation of the antiheroic Joker became iconic and classical. In 1992, the detective drama “A Few Good Men” was the most cited movie of the year because of Nicholson’s phrase “You can't handle the truth!” In 1997, the actor got the third Oscar as the best actor for the movie “As Good as It Gets” where Helen Hunt was his partner. She also won the Academy Award for Best Actress.

In the new millennium, there were new successful projects in the detective “The Pledge,” the psychological drama “About Schmidt,” the comedy “Anger Management,” “the romantic melodrama “Something's Gotta Give,” thriller “The Departed,” and the philosophical movie “The Bucket List.” In the latter project, the famous actor Morgan Freeman also took part.

The latter work by Nicholson was the role of Charles in the comedy “How Do You Know.” The movie came out in 2010 and failed.

Not all Nicholson’s roles are accepted by critics and viewers. The American has been nominated for the anti-award Golden Raspberry as the worst actor twice for the movies “Man Trouble” and “Hoffa” in 1992. However, there are much more enthusiastic reviews on the actors’ works.

The movie “Wolf” released in 1994 improved the situation. In this work, the actress Michelle Pfeiffer became his stage partner.

Nicholson broke the record in terms of Oscar nominations – he was nominated 12 times and won 3 awards. He also has 3 BAFTA awards; the actor was the laureate of the Golden Globus Award 7 times, got the American National Board of Review Award 6 times, and won the Screen Actors Guild Award 6 times. In 1994, Nicholson got the American Film Institute Award for the lifetime achievements.

In 2013, the actor Tom Cruise and the director Doug Liman personally contacted Jack Nicholson and offered to play in the comedy “President.” Cruise and Liman visited the actor in his house in Los Angeles. Cruise said he was reluctant to take part in the project if Nicholson would reject the offer. The agreement between the movie creators and the famous actor was not reached.

Experts suggested that Tom Cruise wanted to replicate the 1992 success when Nicholson and he starred in the movie “A Few Good Men” because it was nominated for 4 Oscars. Critics believe this success was rooted in the brilliant duo of the actors.

The images personified by Jack Nicholson on the screen have become popular on the Internet. Users willingly create memes with the actor, and each of them has thousands of hits.

Jack Nicholson was married just once. In his marriage with Sandra Knight, he has the daughter Jennifer Nicholson. Jack and Sandra married in 1962, but six years later, the couple divorced.

Nicholson is one of the most lovable stars who had relationships with many women. In 1969, he had a short affair with the actress Susan Anspach. With her, he has the son, Caleb Goddard, although Nicholson never acknowledged paternity. With the photo model Winnie Hollman, he has the daughter Honey Hollman.

For 17 years, Jack lived with the American actress and director Anjelica Huston in a civil marriage. The couple split up after the new passion of Nicholson, the actress Rebecca Broussard, got pregnant. Rebecca gave birth to two kids, the daughter Lorraine and the son Raymond. The children’s surname is Nicholson.

Since childhood, the actor has been passionate about sports. Nicholson shouts for the baseball club “New York Yankees” and basketball team “Los Angeles Lakers.” For the last 25 years, the actor has never missed a single game of the basketball team. Directors and producers have to take into consideration the match schedules in which Nicholson’s favorites play so that the sports meetings would not overlap the work on the movies in which the actor participates.

Besides, Jack Nicholson is a genuine collector – he collects the paintings created by the artists of the 20th century, mostly the works of the Scottish artist Jack Vettriano.

In one of his recent interviews, Nicholson said he was lonely and could die alone, and all his love affairs and connections in Hollywood were the things of the past. As the people close to the Hollywood star report, in recent years, the actor spends his days in this mansion in Mulholland Drive, plays golf, and watches movies.

Nicholson commented on his loneliness: “For a long time, I was afraid to be alone. I had to learn how to be alone. And there are still times when I think, Uh-oh! I gotta talk to somebody here or I'm gonna go crazy! But I like to be alone. Now I do. I really do. There's a big luxury in solitude.”

As early as in 2013, the American media provided information that Nicholson announced about the end of his acting career. The reason for this decision was allegedly the loss of memory because the actor could not presumably learn by heart the characters’ replicas. This news was called false soon. Nicholson continued to work in the movie industry and actively searched for good scenarios and projects.

Finally, the actor got bored with this activity. In January 2017, it was known that Jack Nicholson was leaving cinematography. The star’s colleague Peter Fonda told the British journalists about it.

Fonda emphasized that he did not know why the actor had made this decision. According to Peter, Nicholson “is basically retired.” There was no other information regarding the actor’s possible farewell until February 2017 when it was announced that Jack Nicholson would take part in the English remake of the movie “Toni Erdmann.”

Nicholson is a great fan of this movie created by the German director Maren Ade. In the American press, it was stated that the actor himself visited the studio Paramount to offer to create the movie remake in Hollywood. The American actress Kristen Wiig is expected to collaborate with the star, and Maren Ade, the director of the original movie, will be a co-producer of the Hollywood version. Will Ferrell and Adam McKay will be the producers of the movie.

Critics claim that Jack Nicholson’s decision to leave cinematography will not make an impact on his image, name, or filmography – this actor has already become the Hollywood legend. 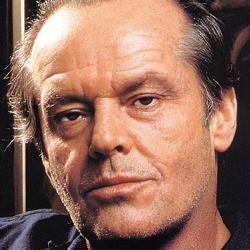