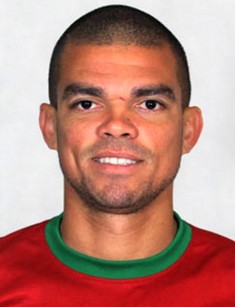 Pepe is the Brazilian soccer player and the talented defender who does not mind fighting on a soccer field. The sportsman stands out for his conservatism and loyalty: throughout his long career, he has changed only three clubs. He supported Real Madrid the longest.

Kepler Laveran de Lima Ferreira was born in the Brazilian town Maceió. The father gave the boy the nickname “Pepinho” as a joke.

The nickname may be translated as “the small one” which contradicted the reality: the child was big and strong; eventually, the young man’s height was 188 cm. The first coach decided it was inappropriate to call an independent person Pepinho and started calling the beginning player “Pepe.”

Just like his peers, Kepler played soccer in the yard from morning till night. Later, he began to practice at the Napoli academy stadium and joined Corinthians Alagoano where professionals realized they dealt with the talent.

Pepe was a hard-working person with the excellent technique; he could feel his opponent and the field. In a while, the representatives of the Portuguese club Marítimo B took an interest in the sportsman and offered him to join them and move to Madeira.

Pepe did not hesitate to start conquering the world. However, the first moments were challenging. He had to stay in a hospital because he had had a serious trauma: once, he broke his leg and did not recover completely.

As the 18-year-old man was accepted to the second-division youth team, his professional soccer career began. Pepe tried himself as a forward, halfback, and defender. When he joined the adult team governed by the coach Anatoliy Byshovets, he chose his main role: the defender.

The talented player was mastering his technique and became the team’s leading defender by the 2003/2004 season. He scored three goals and had more than 60 matches.

In the course of time, Porto noticed the sportsman and bought him for €1 million. Pepe was splendid; trophies followed one another. First of all, the team won the Intercontinental Cup, later the Supertaça Cândido de Oliveira, Taça de Portugal, and the Primeira Liga.

Kepler was called the strongest defender of the club; people said Porto had not had such a wonderful player for a long time. Thus, nobody was surprised when prestigious European clubs became interested in the player. Real Madrid was the quickest among them. In the middle of summer 2007, Pepe joined the club. The sportsman’s cherished dream came true: he could not believe this was happening. The transfer cost was €30 million.

The contract was signed for five years and extended until 2017. In that season, Real Madrid became the champion of the country. Pepe won Copa del Rey Supercopa de España twice. He was also the Champions League winner.

The talented player did his best from the very first season. Together with Sergio Ramos, he made the team’s defense truly powerful. The Brazilian’s style was virtuoso and at the same time cold-blooded; his unprecedented actions on his opponent’s territory were remarkable. Pepe fought for his team harshly and prevented attacking players from approaching.

The sportsman got a new nickname in Real, “the beast.” Kelper turned out to be a cocky player, and he often got yellow cards. In spring 2009, he initiated the fight with Javier Casquero which turned into the big conflict. After that, Pepe was banned from appearing on the field for ten games. In 2011, Pepe was rough with Gómez during the Champions League match. At the Copa del Rey final game, Pepe stepped on Lionel Messi’s hand.

Working in Real, Pepe had several traumas some of which threw him off sports for months. For instance, at the end of 2009, Pepe injured his knee and spent six months recovering. Besides, Kepler had a concussion after the collision with Casillas.

Kepler was going to play for his country’s national team, but Brazil did not invite him. At the age of 20, the young man became the Portuguese citizen. For the first time, he joined the Portugal national team in 2012 during the European Championship. In the match against Germany, he almost scored, but the ball hit the bar.

In the game against Denmark, Pepe scored the first goal. In the third tournament game between Portugal and the Netherlands, Cristiano Ronaldo scored two goals. The national team won the bronze medal that year. Euro-2016 brought them the victory. In the final game, Pepe was named the best player and included in the star team.

The surgeon Ana Sofia Moreira is Pepe’s wife. The player met the medical student in 2007 when he played for Porto. Two years later, they started living together in Madrid.

There are two daughters in the family: Angeli Sofi and Emily Moreira. The wife was going to gain more experience in a private clinic but eventually devoted herself to the family. Anna Sofia likes sports; she knows a lot about soccer and plays basketball. Pepe often posts photos of his “favorite girls” on his Instagram page.

In summer 2017, Pepe left Real Madrid: he was not satisfied with the conditions in the new contract offered by Zinedine Zidane. The player transferred to the Turkish club Beşiktaş as a free agent; the club did not pay anything.

In winter 2018, the Turkish played in the Champions League. In the 1/8 final, Bayern scored five goals and defeated the team. Pepe believed the reason for the failure was that his team was in the minority after several players were sent off the field. Kepler explained it was difficult to play the high-quality game under such circumstances.

In June 2018, the Portugal national team took part at FIFA World Cup 2018. The team had a draw with Spain and Iran and defeated Morocco. The next 1/8 game was not lucky: Uruguay crashed Portugal. The score was 1:2.

Pepe is known as the actor among soccer players: he has often simulated. At the FIFA World Cup 2018, the Portuguese defender stood out during the game against Morocco and started fighting. Medhi Benatia allegedly attacked him from his back. Pepe fell on the grass, sprang to his feet, and began to argue violently involving the referee. In fact, Benatia just tapped Pepe on his shoulder. 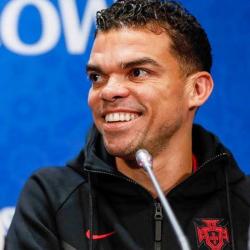