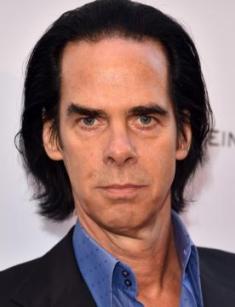 Nick Cave is a talented rock musician, writer, and poet. People also know him as a screenwriter and songwriter whose masterpieces appeared in many popular movies. The artist is the leader of the group Nick Cave and the Bad Seeds.

Nicholas Edward Cave was born in September 1957 in Warracknabeal, Australia. His father, Colin Frank Cave, was an English teacher, and the mother, Dawn Treadwell, worked as a librarian. The boy had three siblings: Peter, Tim, and Julie.

Nick showed his musical talents early. After graduation, the young man entered an art college and met Mick Harvey, his future colleague and friend, who participated in all his projects.

Cave and Harvey organized the group Boys Next Door in the late 1970s. The band existed for several years and broke up by 1980, when the young men created The Birthday Party. The new project stopped existing, too: the musicians had a tour in Europe and split up in 1983.

In the early 1980s, Cave met Blixa Bargeld, the leader of the German group. The Australian artist liked Blixa’s manner so much that he invited him to collaborate, and Bargeld accepted the offer. They worked together for almost 20 years.

The renewed band, Nick Cave and the Bad Seeds, presented the debuting album From Her To Eternity in 1984; fans and critics appreciated the disc. Eight years later, the group recorded the starry album Henry’s Dream. The reputable British edition Melody Maker named it the best album in Nick’s career and put it to the seventh position in the list of the best albums in 1992.

The group’s discography extended in the mid-1990s: Let Love In (“Red Right Hand”, “Do You Love Me?”, “Loverman”) and Murder Ballads (“Song of Joy”, “Stagger Lee”). At the end of the century, fans welcomed The Boatman’s Call, that became number 26 in 100 Best Australian Albums, and the concert disc Live at the Royal Albert Hall.

Following two years of the artistic quest, Cave presented No More Shall We Part. The music video “Bring It On” was immensely popular in 2003.

In 2013, fans enjoyed the 15th album by Cave, Push the Sky Away; Mick Harvey had left the group not long before the release. In 2015, the song “All The Gold In California” appeared as the soundtrack in the second season of the iconic American series True Detective; Leonard Cohen, Bob Dylan, and Lera Lynn worked on the recording.

Apart from music, Nick Cave is known as a writer; he created the novel And the Ass Saw the Angel (1989). The artist is a wonderful poet; two collections King Ink Volume 1 and 2 have been translated into many languages.

One can hear Cave’s music in popular movies: Romance & Cigarettes, Harry Potter and the Deathly Hallows, Lawless, and some three dozen projects. Nick’s concert video appeared in the iconic movie Wings of Desire by Wim Wenders.

Cave tried himself as an actor and collaborated with Blixa Bargeld in Dandy. The cinematographic debut was successful, and the man appeared in the western The Proposition. In 2007, fans could see Nick in the crime movie The Assassination of Jesse James by the Coward Robert Ford starring Brad Pitt.

At the same time, the artist did not stop writing soundtracks. He contributed to the documentary The English Surgeon, the post-apocalyptical movie The Road about the civilization destroyed by the forces of nature, and the crime drama Lawless with Tom Hardy and Jessica Chastain.

In 2014, Cave presented his own project, 20 000 Days on Earth; he wrote music for it and personified himself there. The biopic Prophet’s Prey brought another lead part; the musician also created its soundtrack.

The artist has close connections with cinematography as a screenwriter, too. He wrote scripts for Lawless, The Death of Bunny Munro, The Crow, and Ghosts… of the Civil Dead.

Nick Cave had a long relationship with Anita Lane, the member of Nick Cave and the Bad Seeds. People often called the woman Nick’s muse, but the couple split up after ten years together.

In 1991, the musician became a father twice: a Brazilian journalist Viviane Carneiro and a former model Beau Lazenby gave birth to his sons. However, Cave did not want to go steady with any of them. The affair with PJ Harvey, the member of his group in the 1990s, was also short-term.

The man settled after he met the English model Susie Bick in 1997. The wedding took place two years later. The twins Arthur and Earl were born in this union, but Arthur died in 2015: the teenager fell from a cliff and died of injuries. The family was mourning for a long time.

Nowadays, the rock legend continues to thousands of people to his concerts. In 2016, the musician and his group presented the album Skeleton Tree; it was recorded as a musical documentary and directed by David Barnard. The music videos “Jesus Alone” and “Red Right Hand» (Angel Heart)” came out at the same time. The project had a large international tour in many countries and cities.

Nick Cave and the Bad Seeds