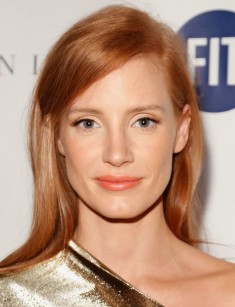 Jessica Chastain is an American actress, the star of popular movies The Help, Interstellar, The Tree of Life and The Martian.

Jessica Chastain was born in the Californian city of Sacramento and before she became famous she had the surname Howard. Chastain is her mother’s maiden name, and it became the pseudonym of the actress.

Jessica's mother, Jerri Chastain, was engaged in cooking vegan dishes, working as a chef. Everything is much more complicated with the actress's father. Fans do not only know his profession but even his name and real personality.

The actress says that it is just speculation that her biological father was the rock musician, Michael Monasterio. No father is listed on her birth certificate, and Jessica categorically refuses to conduct an investigation to clarify this fact, since she considers this to be a betrayal of her stepfather Michael Hastey, who brought her up as well as his own four children.

Chastain had the warmest relationship with her grandmother Marilyn. Being a big theatre-lover, grandmother taught her granddaughter to love art too. At the age of seven, Jessica knew clearly that she would be an actress. She began attending the dance studio, and at the age of 13, she trained at a drama club. After graduating from high school, the girl played in the production of Romeo and Juliet. The actor, who played the role of Romeo, told her about the famous Juilliard School. Jessica set her heart upon this school.

She went to New York together with her grandmother and participated in the to audition for the Juilliard School. It was very difficult for Chastain because she could not pay for expensive tuition fees, but the examiners liked the actress’s performance so much that she was granted a scholarship funded by the actor Robin Williams.

Jessica Chastain debuted in television series in 2004. She appeared in such well-known projects as Dark Shadows, Agatha Christie’s Poirot, ER, Law & Order: Trial by Jury and many others. The debut on the big screen happened 4 years later in the social drama Jolene. The actress won a Best Actress award at the Seattle International Film Festival for the lead role.

But a real breakthrough in the career was in 2011. Jessica appeared in seven films, and four of them immediately had a huge success. According to Chastain, the shooting with Brad Pitt in the mystical drama The Tree of Life was an incredible experience. The thriller The Debt was no less interesting. Her partner in the movie was Helen Mirren. But the greatest sensation caused the drama about racial attitudes The Help. Jessica Chastain was nominated for the Oscar and Golden Globe for the role of Celia Foote in this movie.

In 2013, Jessica Chastain became a member of the experimental project The Disappearance of Eleanor Rigby, which consisted of three versions which show the story from the perspective of the heroes. Three versions of the film — Him, Her, and Them—were released. The actress played the role of Eleanor in all three films and also worked as the producer of the project.

Later, the actress participated in fairly diverse projects. Jessica played in the psychological thriller Mama, the crime drama A Most Violent Year, the science fiction film The Martian, the fantasy film The Huntsman: Winter's War.

In addition, during the same period, the actress appeared in the gothic melodrama Crimson Peak with Tom Hiddleston in the lead role. The actress played the sister of the protagonist. Jessica also had the opportunity to collaborate with the beloved actor of her grandmother Al Pacino in the film adaptation of Oscar Wilde's play Salome.

In 2016, the actress starred in the political thriller Miss Sloane. Critics admired the actress’s play. In addition, Jessica was nominated for the Golden Globe for her role as Elizabeth Sloane.

The actress’s heroine is a talented lobbyist who is hired to lobby bills into the laws and manipulate public opinion. The plot tells about a bill that restricts the freedom to buy and own firearms in the United States. Elizabeth Sloane refuses to defend the gun lobby and goes to a competing company. This is the beginning of a real enmity between former colleagues.

Jessica’s acting career already has four dozen movies, but fans add even more films because they often confuse the actress with her colleague Bryce Dallas Howard. Young women are not too similar according to parameters as Jessica's height is 163 cm, Bryce is 170, Chastain’s weight is 50 kg, and her colleague is 63 kg, but they have a similar image and long bright red hair.

For a long time, Jessica Chastain had a romantic relationship with film director Ned Benson, but they broke up in 2010. They cooperated in the trilogy The Disappearance of Eleanor Rigby after the breakup. Nowadays, the actress dates designer Gian Luca Passi de Preposulo, who works for the Italian world-famous brand Moncler.

Jessica adheres to the vegan diet, and before she was considered a vegetarian. In 2012, the actress was named the sexiest vegetarian actress in a poll conducted by PETA. In addition, the actress is a feminist. Jessica regularly states that actresses are rarely offered worthy and significant roles. She also often protests against making heroines very sexual in films.

The actress has joined the social action against Harvey Weinstein on Instagram and other social networks, where the stars accuse the film producer of sexual harassment. The participants of the action were accused more than once of black PR and mobbing, but Jessica expressed her opinion that ignoring of such problems would only contribute to their repetition.

In 2017, the actress played a lead role in the film The Zookeeper's Wife. The film is based on the book by Diane Ackerman under the same name.

The plot of the film is based on a true story. The main characters of the movie the keeper of the Warsaw Zoo Jan Żabiński (Johan Heldenbergh) and his wife Antonina Żabińska (Jessica Chastain) were honored as "Righteous Amongst the Nations" because during the occupation of Poland by the Third Reich they hide Jews who fled the Warsaw ghetto in empty animal cells.

The actress also played in the genre of western and starred in the film Woman Walks Ahead. Another movie of 2017 was Molly's Game, where Jessica played the role of Molly Bloom.

Nowadays, the actress is filming in several projects. The actress will appear together with Natalie Portman in the biographical drama The Death and Life of John F. Donovan. The film will be the English-language debut of Xavier Dolan.

It has also been announced that Jessica Chastain will play Marilyn Monroe in the screen version of Blonde, which will be released only in 2018.

2018 will not be for Jessica only a year of celebrities’ biographies. The same year, Jessica Chastain appears in the fantastic action movie X-Men: Dark Phoenix in the role of Lilandra. The film will be an installment in the X-Men film series. The film tells about the youth and development of the superheroine Jean Grey (Sophie Turner), who was later named Phoenix. 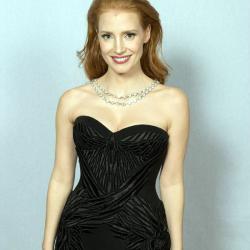