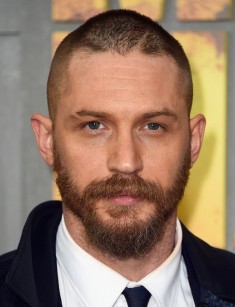 Tom Hardy is a British theater and film actor, producer and screenwriter. Known to the audience by his participation in Hollywood films. He gained popularity after the film "The Revenant".

Tom Hardy was born in mid-September, 1977 in Hammersmith, the western part of the London district, and was the only child in the Catholic family of Anne and Edward (Chips) Hardy. Soon the family moved to East Shin, a cozy bohemian district of London near the Thames, the favorite place of the creative elite, writers and actors. Tom's parents were quite consistent with the place of residence: Ann is a fashionable artist, Edward wrote commercials and good comedies.

The boy grew up in a creative environment and began to attend theatre courses in school years. Tom had no brothers and sisters, so all love and care of his parents went to him alone. His father and mother intended to give their son a good education, but it wasn’t easy because the guy did not want to study. Already at the age of 13, young Hardy tried alcohol for the first time. A year later he tried drugs. For his bad behavior, he was expelled from the prestigious boarding school.

At 15, Tom Hardy made his first tattoo. There will be plenty of them afterwards. At the age of 19, the guy won the competition and signed a contract with one of the modeling agencies, but from there he was soon expelled. The reason was the same - drugs. For some time the young man studied at one of the theatre schools in Richmond. The studies ended, like all the previous. As a result, he continued his theatre education at the London Drama Theater school, where he was taught according to the Stanislavsky method.

Tom Hardy, under the leadership of talented teachers, who taught Anthony Hopkins, studied there for three years. But when he was called to play Private John in the popular TV series "Band of Brothers", the beginning actor decided that it was time to stop his studies. He starred in this picture about World War II, but it wasn’t successful. The historical military drama "The Fall of the Black Hawk ", released in 2001, helped the young actor to get other roles. Participation in this film was a turning point in the creative biography of the actor.

Soon Tom Hardy changed the direction and appeared in the melodrama "Dot the I". Hardy did not really like melodramas. He refused the roles in the series and appeared in military films. For filming in the next movie, he even moved to the north of Africa.

The most notable film of this period is the science fiction film “Enterprise”. Then even more successful work followed. This was a project with a huge budget, $ 60 million - "Star Trek: Nemesis." This film made Hardy a famous actor.

To work in the next film Tom Hardy came to his native England. He was invited to play the role in the thriller "LD50: Lethal Dose". This film was released in 2003. In the film, the directors told the audience a dramatic story about the raids of Greenpeace terrorists at the laboratories, which made experiments on animals.

It must be said that in the intervals between filming Hardy successfully plays on the stage. In 2003, he even received a prestigious theater award for his work in "Arabia, we will be kings" and "Blood". A year later, he also won the Laurence Olivier award.

Tom Hardy also appeared in the historical film "Marie Antoinette". In this film, Tom showed his acting talent, and the audience enjoyed the image of a handsome guy and his brilliant game.

In 2007, the film “Stuart: A Life Backwards" was released, where Tom Hardy played the main role along with Benedict Cumberbatch. Tom repeatedly called this film his best work in the cinema, after which he appeared in movies just for fun.

In 2008, Hardy appeared in the sensational comedy by Guy Ritchie "Rock-n-Rolla." It must be said, that the role of Tom was quite scandalous: he played a criminal who was gay. He falls in love with the gang leader, played by Gerard Butler.

In 2009, Tom received a significant role in the autobiographical drama by Winding Refna "Bronson". This is the story of the most dangerous criminal in England, who spent nearly 40 years in prison. For greater similarity with the original, Tom Hardy even gained weight.

One of the films, which are especially loved not only in England but also in Russia, is "Wuthering Heights". Hardy played the main role very professionally.

In 2012, the film "Lawless" was announced. The main roles in the film were played by Tom Hardy and Shia LaBeouf. Neither Hardy nor LaBeouf can be called shy - Tom likes to blatantly speak out loud in public, Shia, on the contrary, stopped communicating with the press. There were rumors that in the intervals, the actors even quarreled and fought.

Also, the last significant works of Hardy were the drama "Warrior", the thriller "Inception", the action movie "Mad Max" and the superhero action movie "The Dark Knight Rises". To participate in the last film Tom had to undergo an intensive training course, having carried out the program of a large-scale training, which was necessary for the role of Bain.

The film "The Revenant" brings Hardy a stunning success. Along with the famous actor Leonardo DiCaprio, he gets the main role in this feature film. The British actor is now a participant of many events in Hollywood, and famous directors want to see him in their films.

The film was created on the basis of a real story of mountaineer Hugh Glass (the role was played by Leonardo DiCaprio). It is about the events of the first half of the XIX century when trappers hunted in the northwestern part of North America. Group of hunters is on the territory of the tribe of the Indians, where an armed conflict with the indigenous inhabitants of the land begins. So dozens of pioneers died. Soon in the fight with the bear, Glass was seriously injured. Realizing that the skillful hunter will die, the group decides to split into two parts. The fascinating story of the main character’s survival begins.

Tom Hardy played the role of the treacherous John Fitzgerald, who is guided only by personal interests, and also wants the early death of Hugh Glass. Still, despite the circumstances, Glass manages to survive and take revenge on Fitzgerald.

This work can be called a kind of example of a life where hatred and revenge help a person to survive even in hopeless situations. At the same time, Hardy's character has become an example of a person from the modern world without moral values, and the desire for wealth destroys the last pieces of humanity. The man clearly demonstrated this by making his viewers think about the morality of our time.

Tom Hardy visited Russia. Once during the project for the channel Discovery, he arrived in Yakutia, where he decided to learn about the abnormal temperatures and the life of local people in extreme conditions. Years later, the audience will call this trip a kind of preparation for the filming in "The Revenant".

In 2016, after the "Oscar" ceremony, the actor made a tattoo "Leo knows everything". On such a radical step the actor went, losing a dispute with Leonardo DiCaprio.

During the filming of the movie "The Revenant", the American said that his colleague will receive the nomination for Oscar for the role of a second plan in this film. In turn, the British actor told that this will not happen. As a result, Hardy was nominated but didn’t receive "Oscar".

According to Tom, the American actor wrote the phrase "Leo knows everything" for a new tattoo in a "terrible handwriting".

In 2017, new films with Tom Hardy - "Gohatto" and "Dunkirk" - will be released. Surely in the near future, it will be possible to see the British in military historical films. "The Revenant" has fixed the reputation of an experienced traveler, who takes part in fascinating adventures.

Tom tries himself in other roles. In the British dramatic television series "Gohatto", he got not only the main role. He also worked as an executive producer of the film.

It is possible that the actor will participate in a new large-scale project and replace Hugh Jackman, who has long played the role of Wolverine in the series of films "X-Men." The Australian in an interview noted that, in his opinion, Tom is the best candidate for the role of Logan.

Tom Hardy's personal life was very interesting until recently. As he claims, you should try everything in life. Hardy himself admits that he had relations with both women and men, but only as an experiment.

While studying in London, he had relations with the actress Sarah Ward. The bright three-week relationship ended with a wedding, but Sarah left Tom, learning that he was in a rehabilitation center and was treated for drug addiction.

For some time the famous actor had the relationship with a TV presenter Linda Park. When they broke up, he began relations with the actress Rachel Speed. Rachel gave birth to Tom's son, but the couple never got married.

In the press, there was also information that the actress Emily Browning became Tom's new girlfriend, but they did not confirm this information. Earlier the celebrities together appeared in the movie "Legend".

It is known that the actor had warm and friendly relations with Noomi Rapace, the actress of theater and cinema from Sweden. They starred in the criminal drama “The Drop”.

On the set of the movie "Wuthering Heights" Hardy began relations with Charlotte Riley, who starred with him. A year later, Hardy made an offer to Charlotte, and in 2010 she became his wife. The couple has children - in October 2015, their son was born.

It is known that the famous actor is very fond of dogs. In 2015, Tom, along with his dog named Woodstock, whom he once picked up on the street, starred in the advertising campaign PETA. 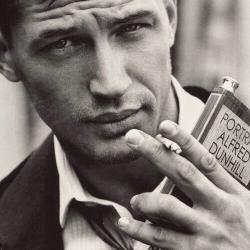