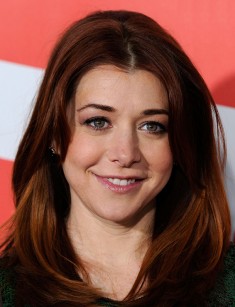 Alyson Hannigan is a well-known American actress, who won the viewers’ hearts with bright roles, excellent acting in films, TV shows. The girl was born on March 24, 1974, in Washington, D.C. Her path to fame and popularity was not easy, but she became well-known quite rapidly thanks to the talent and luck.

Alyson’s parents could not boast good connections in the world of show business. The future actress grew up in the family of ordinary average Americans. Her father Albert Hannigan was of Irish ancestry and a real estate agent; later he worked as a trucker. Mother Emilie Posner was a housewife and Jewish.

When Hannigan was two years old, her parents divorced, and the girl and her mother moved to Atlanta.

At the age of four, Alyson already began to develop an acting career, but she did not realize it. It all started with a bit part in advertising, and when the girl was 11 years old, the mother with the daughter moved to Hollywood. The future celebrity graduated from North Hollywood High School, then enrolled in the Faculty of Psychology of California State University.

In childhood, the active girl loved to play football, and she did it no worse than boys, but, after getting injured, the game became a hobby. Alyson Hannigan also has an ear for music, and in her youth, she learned to play the clarinet.

It is unknown what motivated the young girl to join the world of cinema. Perhaps the reason was a bright and lavish life in the Tinseltown or her talent that was destined to flourish. Hannigan’s first work is believed to be a small, insignificant role in the film Impure Thoughts.

It was followed by the similar appearance in an episode of the comedy series Roseanne. Later, the novice actress got the first prominent role in the film My Stepmother Is an Alien. At that time Alyson was only 14 years old. On the set, the girl met Seth Green, her future partner in the series Buffy the Vampire Slayer, which brought her real fame.

Later, there was a small break, and Hannigan plunged into her studies. At the same time, she voiced characters in the animated series The Simpsons and Rugrats, etc.

Until 1995, Alyson has a status of a "beginning, little-known actress," but she played a bit part in the drama The Stranger Beside Me, and directors finally paid attention to her. She received interesting offers.

Soon the young diva played in one more drama film For My Daughter's Honor, but the peak of her popularity was the youth fantasy series Buffy the Vampire Slayer, where she played the role of Willow Rosenberg, Buffy's friend (Sarah Michelle Gellar). Not only Alyson but also other actors (Amber Benson, David Boreanaz, etc.) became successful after filming because the series was considered one of the highest rated projects in the 1990s.

Despite the fame, the young actress did not intend to stop. Soon she appeared in such favorite projects as American Pie, Dead Man on Campus and Beyond the City Limits. At the beginning of the new century, the actress's income was increasing, and soon she could choose the roles she liked.

In 2005, talented Alyson Hannigan got a role in the comedy series How I Met Your Mother, which became incredibly popular with the American viewers. The actress played the central character, Lily Aldrin. Neil Patrick Harris, Josh Radnor, Cobie Smulders, Cristin Milioti and others also starred in this film.

They say that the actors wrote dialogues for this series. Besides fame, the young and successful actress enjoyed her acting in the series. Hannigan’s daughter was even set to play in the film, but by the time of filming the girl was not young enough.

While shooting in the comedy How I Met Your Mother Alyson managed to appear in other films: Date Movie, Love, Wedding, Marriage, etc. One of her latest works is the project American Reunion. The film grossed $ 235,5 million becoming a highest grossing movie of the franchise. Alyson’s salary was $3 million.

On October 11, 2003, the eligible Hollywood bride turned into an exemplary wife, joining hearts together and signing the marriage certificate with actor Alexis Denisof. The young people began dating whey they filmed in the famous series Buffy the Vampire Slayer, and later celebrated a lavish wedding.

After six years of happy married life, the couple had a daughter, Satyana, and two years later the family had one more little princess named Keeva Jane. Now Alyson Hannigan along with her husband and children live in the suburb of Los Angeles.

Alyson was pregnant twice while she was working in the project How I Met Your Mother, and the filmmakers had to hide Alyson's belly using various interior design items, special clothes, etc.

In one of the episodes, the screenwriters came up with an exciting story for the pregnant actress - eating hot dogs. According to the idea, Lily ate precisely 33 hot dogs and gained weight quickly. It was an excellent joke.

In the middle of 2016, Alyson Hannigan joined the cast of the cult film The First Wives Club. She got the role of Maggie, an aspiring poet, and English professor.

The plot of the movie centers on the stories of three girlfriends and classmates, who have to overcome life troubles (divorce, problems in relationships, etc.). Maggie (Alyson) will try to get the love and spark back in her marriage. It will be known later whether she succeeds or not.

Alyson Hannigan is one of the most talented actresses of our time. She has repeatedly won various awards, prizes for the excellent acting. She is a kind and easy-going woman who distinguishes herself with a wonderful sense of humor. 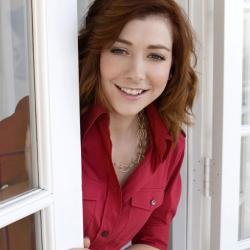