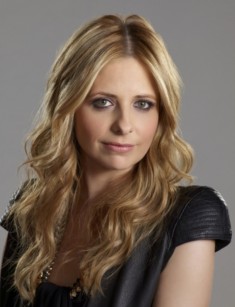 At the age of four, her photographs appeared on the covers of children's glossy magazines, and at the age of five, Sarah Michelle was well known in America. Sarah starred in a controversial television commercial for Burger King. The girl ate burgers and claimed that they were more delicious and cooler than those at McDonald's. Advertising led to a lawsuit and Sarah was a witness. After this accident, the girl was swamped with offers from filmmakers, and Sarah appeared in about one hundred commercials.

Sarah Michelle Gellar was born on April 14, 1977, in New York in the family of Rosellen Greenfield, a teacher, and Arthur Gellar, a garment worker. The parents divorced when the girl was seven years old. She lived in a modest family because the mother could hardly pay her rent.

When Sarah Michelle became famous, her relations with classmates deteriorated sharply. The mother transferred her daughter to another school where children of wealthy parents studied. The classmates did not want to make friends with a new pupil, because Sarah wore unfashionable dresses as the mother did not have enough money for a new clothing collection.

One month later, Sarah left this school and attended the Professional Children's School. The girl made new friends quickly, was fond of Taekwondo and was a brown belt. Gellar also attended diving and water skiing training. Sarah Michelle Gellar was a competitive figure skater finishing in third place at a competition in New York. The girl graduated a year earlier than her peers.

The actress recalls that the mother always took her daughter to auditions, she sent the girls’ photos to studios, and Sarah is grateful to her. Thanks to her mother she decided to pursue an acting career.

Sarah Gellar played the first prominent role in her acting career at the age of seven. It was the movie Over the Brooklyn Bridge. Later, the young actress starred in the series Spenser: For Hire, Crossbow. When she was 11 years old, Sarah appeared in the comedy film Funny Farm.

In 1993, the actress appeared on the big screen in the series All My Children, and two years later won the Young Artist Award – Best Youth Actress in a Soap Opera. The series was so highly rated that in the 1990s the film was included in the top ten best American TV series. The ABC channel broadcasts it. The young actress appeared on the screen with Susan Lucci and Cameron Mathison, which influenced the development of Sarah Michelle Gellar’s acting career.

The girl was invited to play a title role in the comedy Beverly Hills Family Robinson about the sea-voyage of TV host Marsha Robinson’s (Dyan Cannon) family. During the journey, the family shipwrecks on a deserted island.

Then Sarah Michelle auditioned for Buffy the Vampire Slayer. Gellar screen tested for the role of Cordelia, but the actress was cast in the title role. After filming in this project, the actress became world-famous. Sarah Michelle earned $ 75 thousand for her work. The mystical series was top-rated, so it ran for seven seasons.

The actress did her best on the set. Sometimes Sarah had to work 22 hours a day. One day the girl came to the studio wearing a nightgown because she forgot to change her clothes in the morning.

Sarah Michelle Gellar was popular with young people, and her filmography included new projects but attempts to win adult viewers’ hearts were unsuccessful. Sarah coped with the role of Helen in the thriller I Know What You Did Last Summer and won two prestigious awards. But the following films were a failure.

Then the actress was invited to play in the film Cruel Intentions, which tells about the wealthy youth driving luxury cars and blowing snow. When the shooting ended, Sarah Gellar went on a promotional tour and had 40-60 interviews every day. The actress achieved her goal. She won several prestigious awards, as well as viewers’ love ant the film was successful. Sarah Michelle was named the sexiest actress.

The actress’s success criterion was her participation in the series Sex and the City, which in the late 90's was a stunning success and took the audience by storm. During these years, Gellar appeared in the slasher film Scream 2 with David Arquette, Neve Campbell and Courteney Cox in the leading roles. Sarah Michelle played a bit part in the romantic melodrama She's All That.

On the eve of the new millennium the comedy Simply Irresistible was released, where Gellar played the role of Amanda Shelton, the heiress of a lucrative restaurant, but she knew a little about cooking. Sean Patrick Flanery appeared in a duet with Sarah Michelle Gellar.

In the early 2000's, she worked in the projects Harvard Man, The Grudge, The Grudge 2, The Return and Southland Tales. The 2006 Cannes Film Festival opened with the premiere screening of the last movie. In 2009, Sarah Michelle starred in the drama film Veronika Decides to Die, and two years later started her project, Ringer. The girl was a producer of this series and played the dual role of twin sisters. One more exciting project of that time was the psychological thriller Possession, where Sarah Michelle appeared with Lee Pace.

In 2013, Sarah Michelle Gellar worked as a producer again. It was the sitcom The Crazy Ones, where she together with Robin Williams played a daughter and a father, working in the advertising business. TV viewers and critics liked the film, and Sarah won one more People's Choice Award – Favorite Actress in a New Television Series.

Sarah Michelle Gellar is a happy wife and mother. Sarah met her future husband, Freddie Prinze Jr., on the set of I Know What You Did Last Summer in 1997. At that time, the young people made friends, but they did not have serious relations because Freddie had another girlfriend. The shooting ended, Sarah Michelle and Freddie did not see each other for a while. But in 2000 Freddie broke up with his lover, and they got back in touch. The young people began dating, and two years later the couple celebrated the wedding.

The newlyweds settled in their mansion. A daughter, Charlotte, was soon born, and three years later, they had a son, Rocky.

Sarah Michelle says that their personal life is an eternal honeymoon. They spend evenings together; Freddie asks his wife out on a date. The star couple rarely visits public events, and they prefer a quiet family life.

Sarah Michelle Gellar took a career break. The latest films Those Who Can't and Cruel Intentions appeared on TV in 2016. Nowadays the actress communicates with fans through social networks, including Instagram.

Six years after the birth of her second child, the woman told on her official Instagram page how she overcame postpartum depression. 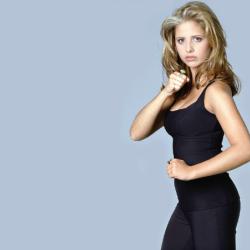