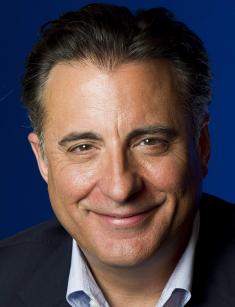 Andy García is a talented American actor, a director and a composer. Garcia`s Spanish roots allowed him to create the whole gallery of recognizable images. The role of the mafia in the cult cycle of Francis Coppola's The Godfather Part III nominated the actor for several prestigious awards for the role of the second plan.

Despite strict moral principles and the absence of scandals around him, García became famous in Hollywood and around the world, where people watch American films.

Andrés Arturo García Menéndez was born on 12 April 1956 in Havana, Cuba. The family of his parents are an English teacher Amelie Menéndez and a lawyer René García Núñez; they lived quite prosperously. So after the revolution, the family fled Communist Cuba to the United States and settled in Miami Beach. The former lawyer was engaged in the manufacture of perfumes and achieved success there.

Young Andrés García studied in the United States. Andy was a popular, handsome and athlete student at school, he dreamed of playing baseball professionally. However, he contracted mononucleosis and hepatitis and had to leave dangerous sports. As a result, the actor's career was chosen.

Andy García studied acting with Jay W. Jensen, who brought up a lot of talented actors. He taught Brett Ratner, Roy Firestone, Mickey Rourke, and Luther Campbell. Despite successes at Florida International University, García relocated in Los Angeles in 1978, where he played in independent theatre troupes, periodically appearing on television.

The actor starred in two dozen projects for ten years. Fame came in 1990 with the release of the movie The Godfather Part III, where García played Vincent "Winnie" Mancini, the insidious and temperamental mafia, the illegitimate son of Santino Corleone. Andy was Oscar Award- and Golden Globe Award-nominated for this role. As a result, the directors began to invite the actor to the role of gangsters or, in extreme cases, brutal police.

People sometimes confuse Andy García with Mark Strong, the British actor of Italian origin. We can find photos of both actors in the collections of twin stars. Perhaps the information that Andy García is 70 feet (178 cm) tall and Strong is ten centimeters higher will help film fans distinguish their favorites easily.

In 2004, García played the Italian artist Amedeo Modigliani in the film Modigliani. One of the tasks of the picture was to show the painter, who lived a hundred years ago, a living person, not a flat picture from a textbook. Andy García did the job. According to the statement of Andy García, he needs a good partner for qualitative work; a female partner is better. Elsa Zylberstein allowed him to work passionately and violently in the movie Modigliani.

The actor had to play the first persons in the country. In 2011, he starred as the president of Georgia, Mikhail Saakashvili in the film 5 Days of August. García learned to speak with a Georgian accent and gesticulate while watching Saakashvili's YouTube videos to prepare for the role. The actor appears in the role of the fictional US president Andrew Palma in the fantastic reality of the thriller Geostorm.

Generally reliability comes with age: in the sci-fi melodrama Passengers, Andy turns to Norris, the admiral of the space fleet. García plays a general of the army of the rebels, Enrique Gorostieta Velarde in the Mexican drama For Greater Glory. He is the mayor of New York in Ghostbusters.

Andy García is engaged in directing in parallel with the work of the actor. The debut tape of the aspiring producer and the director was the documentary Como Su Ritmo No Hay Dos; it is about the beloved Andy, the Cuban composer and the singer of Israel ", Cachao" López. The producer was Emmy Award-nominated for this film.

Andy García is also a professional composer. We can hear his music in the movies The Disappearance of Garcia Lorca, Just the Ticket, he is an author of the text and music songs Big Date. García also performs his compositions in the movies The Lost City and Ocean's Twelve.

On September 24, 1982, Andy García married Maria Lorido "Marivi" García-Lorido, the daughter of Cuban immigrants. Now this marriage is one of the strongest in Hollywood. People say that Andy proposed to his future wife on the first day of the meet – back in 1975. The couple has three daughters and the son. It is known that the elder brother of the actor is Rene García and the name of his niece is Jackie García.

The actor jealously hides the private life of the family. His biography is free from gossip and scandals. He also adheres to strict moral principles in his work: he refuses to act in bed scenes and even to be naked in the range. He is proud that he did not do anything that would make him blush in front of children for all the years of his acting career.

In 2018, the six films were expected, in which Andy García took part in the creation.

Filmography added: prequel to the musical Mamma mia!, the dramatic TV movie My Dinner with Herve, the thriller Decoy, the fiction Iron Sky: The Ark, the drama Anna and the comedy Book Club. We can hope that an experienced and talented actor will be good in any genre.