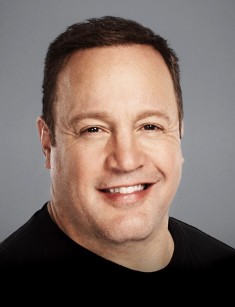 Kevin James began his career in the genre of stand-up comedy; it took him a while to become famous. In the 1990s, James was popular among the Americans who watched his series and shows. Only when the actor turned 40, he got the exciting role which made him one of the brightest comedians in the world, even though he did not receive any awards for that.

The actor comes from Long Island; he was born in Mineola and spent his childhood in Stony Brook. Kevin’s father was the owner of an insurance company; the mother worked as a chiropractor and later quitted the job to devote herself to the family. Gary Valentine, another corpulent Hollywood star, is Kevin’s elder brother. Gary and Kevin have a sister Leslie; unlike her brothers, she did not choose cinematography as a career.

Kevin James graduated from the Ward Melville High School. Today, the actor’s height is 173 cm., and his height is 116 kg. In his youth, these parameters were almost ideal: Kevin was engaged in wrestling. Unfortunately, the young man got a back injury. Later, Kevin tried to take up sports again and joined the student’s football team at the State University of New York at Cortland. However, the old trauma manifested itself, and the young man had to quit sports.

In 1989, James debuted as a standupper. The future movie actor performed in a club in Long Island; the comedian’s talent drew attention, and he started taking part in various talk shows including the famous project with David Letterman. Thus, before appearing on the movie screen, Kevin James built his career on TV.

In the mid-1990s, the TV project Everybody Loves Raymond was launched. For the next nine years, the scriptwriters successfully held the audience’s attention. This series role became James’s first significant work on television.

Two years later, in 1998, the actor was invited to another comic project, The King of Queens. At this time, he managed to gain the lead part; Leah Remini became Kevin’s stage partner.

James’s filmography includes many roles. In 2002, the actor voiced one of the characters in the cartoon Pinocchio; three years later, he played an awkward and ridiculous romantic guy who fell in love with a beautiful millionaire in the movie Hitch.

The box office of the comedy Hitch was $177 million; Will Smith who played the main character contributed to this result a lot. However, the audience was excited by the scenes with Albert Brennaman (Kevin James) most. This role made the actor famous. It was Will Smith who noticed James in The King of Queens and recommended the director to give the role of Brennaman to Kevin.

The moment when the main character tells Albert the secrets of the “right” first kiss was the funniest scene in the movie. Brennaman listened to his teacher carefully and started practicing at once. For this scene, the actors won the prestigious Best Kiss Award.

James showed his fascinating artistic abilities and plasticity. The nightclub episode was also bright: as Albert went to a club with his lover (Amber Valletta), he started dancing lively and cheerfully; the shy clerk looked comically near the slim blonde. Nevertheless, critics did not appreciate the scene.

With all that drive, James should have received numerous offers. This is not how the things went: the next five years brought only three projects two of which pertained to voicing.

In 2010, Kevin James and Adam Sandler appeared in the buddy movie Grown Ups. Critics did not appreciate this work: they believed the scenario and the humor were primitive.

Kevin James is also good in non-comic roles. In 2012, he played the school teacher who was ready to step in the ring to help his student and friend. However, it has been the only role in a drama movie by now.

The same year, the sequel of Grown Ups came out. In comparison with his colleagues (the movie director, Sandler, and three other actors), the comedian did not get the Golden Raspberry Award.

In 2014, the three-month production of the fantastic movie Pixels started in Toronto; James played the fictional American President while Sandler got the lead part again. At that time, James was not called the worst actor.

James’s private life is devoid of rumors and speculations: the actor has no short-term affairs or physical and psychological dependency. In the early 2000s, Kevin met his future wife Steffiana de la Cruz. In 2004, the photos of the happy newlyweds appeared in the media.

James posts family photos reluctantly; there are only a few of them on his Instagram page. The actor has four children: two daughters and two sons.

In 2017, it was announced the series Kevin Can Wait would continue. In January, the media reported James was going to appear in the duo with Adam Sandler. In April, the premiere of the movie Sandy Wexler occurred.

Today, the actor often takes part in movies and receives more complex roles than he used to at the beginning of his career. There is no information about James’s upcoming projects. In 2018, he voiced Frank in the fantasy cartoon Hotel Transylvania 3: Summer Vacation. 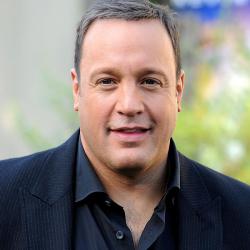