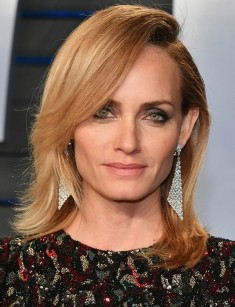 The star of 90's Amber Valletta is famous for her ability to achieve objectives. The girl has made a successful career as a model, gained recognition in the movie industry and overcome severe drug abuse. After her son was born, Valletta changed her lifestyle radically. At present, the woman doesn't eat meat and cares for the environment. Amber's sincere interest in fashion clothes is the only thing that hasn’t changed in her.

The future star of the podiums was born in the family of Portuguese emigrants on the 9th of February, 1974 in Phoenix, Arizona. Her parents sent their daughter to study at the Catholic school. Amber, who was brought up in the religious tradition, wasn’t going to connect her life with show business. The girl was scrupulously preparing to enter the college on Sociology specialty.

At the age of 15 Valletta’s height reached 1.75 m, and her mother insisted on daughter's studies at the model school of Linda Layman. In a short time after the completion of training, the model scouts proposed to the blonde to conclude the contract with the Italian model agency.

Already in a couple of weeks after the move to Europe, the model got the offer to pose for "Vogue" magazine. Her participation in the photo shoot for French "Elle" magazine became her next significant project. Not less remarkable was her cooperation with Peter Lindbergh which received the title of "City Angel".

Successful and remarkable start contributed to the rapid take-off of the model’s career. Already in 1993, Amber's name appeared in one line with the world superstars: Cindy Crawford and Kate Moss.

Step by step the slim blonde (the weight of the girl was about 50-55 kilos) with green eyes was conquering European fashion houses. The girl became the face of Elizabeth Arden brand and appeared on the podium in the outfits from Gucci, Chanel, and Versace.

In 1995, Amber began a new chapter in her model biography. She became the TV host of the "House of Style" show. This reality show demonstrated behind the scenes of the model world and raised topics about different kinds of addictions common among gorgeous girls.

When the model realized that she had achieved the maximum in her profession, Amber decided to try her hand in the new field. The model got the offer to perform a small role in the independent movie "Drop Back Ten". The director was impressed so much by the diligence and responsibility of Valletta towards her new job, that soon Hollywood began to talk about the aspiring actress.

The same year, Amber got another supporting role in the movie "What Lies Beneath" The girl found herself on the film set together with Harrison Ford and Michelle Pfeiffer.

As well as with the modeling, the work was waiting for Amber itself. After the cash projects - "The Family Man" and "Duplex", in 2005 the actress received the remarkable role in the comedy "Hitch".

On the screen, Valletta embodied the image of the beautiful woman. According to the plot, the ordinary accountant is trying to attract her attention. The same year, Amber successfully auditioned for the movie in the film "Transporter 2". After that, she appeared in "The Last Time", "Premonition" and a range of other high-grossing picture.

In 2006 unpleasant publications in the newspapers have overshadowed the successful career of the celebrity. The journalists who knew about Valletta's alcohol and drug abuse during 90-s, have again brought up this old subject. Valletta almost didn’t conceal from public her addictions which she began to have during her model youth. But having matured and realized the danger and risks of such lifestyle she gave up cocaine and alcohol in early 2000-s.

The stay of the actress in the rehabilitation center became the reason to remind of these old rumors. After the therapy, Amber gave the interview in which she stated that she had overcome her bad habits long ago and she needed the vacation because of her long-lasting stress.

In 2009, the actress received the leading role in the fantastic thriller "Gamer". The girl presented on the screen the character called Nika Tillman - the wife of the main character, performed by the actor Gerard Butler.

In 2011, Amber became the antagonist of the heroine of "Revenge" series. The actress presented the personage of Lydia Davis, the first victim of the scheming girl whose father unjustly got into the prison. At first, the role of Valletta was a guest role. As a result, the actress has managed to create such a bright character that the scriptwriters included her heroine into the plot of the whole first season.

Except for the shootings for fashion magazines, in which Ember still participates and appearing in the films, Valletta took part in the creation of song videos. The song video for the singer Fergie under the title "M.I.L.F. $ " turned out to be the brightest work of the blonde.

By the way, the admirers of the model quite often write to their favorite that Amber looks suspiciously similar to Diane Kruger. Such comments are amusing for the world-famous model.

For the first time, Amber seriously fell in love at the age of 20. During one of the fashion displays, the girl got acquainted with the model Hervé Le Bihan. In 1994, the loving couple got married but their family harmony lasted for two years only, and they broke up.

In 1998, the press actively discussed the rumors that the gorgeous blonde had a secret love affair with Leonardo DiCaprio. The actor and the model neither denied nor confirmed their relationship.

The actress became a mother in 2000. A son was born at Amber and her beloved Christian McCaw. The lovers celebrated their wedding in 2003, but in 2014 Valletta and her spouse decided to divorce.

Their son Auden stayed with his mother. From time to time the boy takes part in the photo shoots for glossy magazines.

Since 2016, the model has relations with Teddy Charles – a well-known stylist and hairdresser. The couple attends social occasions and travels around the world together.

In 2018, the model pays little attention to the movie industry. The woman has moved to Los Angeles, but she spends a lot of time traveling around the world. Amber continues to work as a model, and her photos often appear on the covers. If Valletta does not walk on the podium during fashion parades, then she for sure visits secular events as a guest.

Amber actively stands for the environment protection. In June 2018, the model released the documentary under the title "Reinventing Power". The movie is presented as long travel over the country and tells about the ways of saving electricity. The actress regularly posts recent projects, selfies and photos of her son and close friends on her page on Instagram. 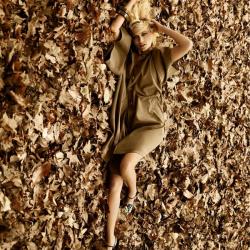