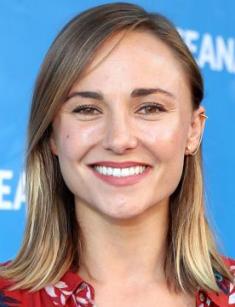 Briana Evigan is an American actress and dancer, who became famous after the release of the movies Step Up and Sorority Row, in which the actress played the leading roles. Briana Barbara-Jane Evigan was born on October 24, 1986, in Los Angeles, located in southern California.

The actress was not the only child in the family. Besides her, her parents also raised an older son, Jason, who is currently the lead singer of the band After Midnight Project, and a younger daughter, Vanessa Lee, who, like Briana, devoted her life to the acting profession.

The actress' mother Pamela C. Serpe and father Greg worked in the entertainment industry. In their youth, her parents, like their daughter, were also connected to the world of art. The head of the family sang and composed music, and her mother played in the theater, so it is not surprising that Greg and Pamela from a young age supported Briana in her desire to connect life with the creative profession.

After receiving her high school diploma, Evigan enrolled in a local College in 2004. There, the active young lady organized an alternative pop-rock band Moorish Idol, in which the future star combined singing with playing keyboards.

On Briana Evigan’s IMDb account one can see numerous legendary movies on which she worked with such hot actors as Channing Tatum, Robert Hoffman and Ryan Guzman.

Her first movie role Briana received in 1996, at that time she was only ten years old. It was a horror movie directed by Scott P. Levy, House of the Damned, in which Briana's birth father, Greg, performed the role of the head of the screen family. The motion picture told the story of a family that discovers magical abilities after moving into the inherited house.

The next time Briana Evigan appeared on the screen was in the music video of the rock band Linkin Park, for the song "Numb." After that, the performer was invited to participate in the popular reality show Next, which was broadcast on MTV. Then there were small roles in the movies Something Sweet and Bottoms Up.

To this day, the leading role of Andy West in the sequel to the popular dance film, Step Up 2: The Streets is considered to be Briana's best work. The movie's plot revolves around the life of a talented, artistic, and athletic young lady, who, for the sake of dreams, goes to study at the Maryland school of dance.

There she meets the most gifted and beautiful student of the school, Chase Collins (Robert Hoffman). Together, they create a united team and try to win the top prize at the unofficial "Streets" competitions. It is known that in 2008, Briana, along with her set fellow Robert Hoffman, received an MTV award in the category Best Screen Kiss, and also starred in the video of singer Enrique Iglesias - "Push."

In 2009, the filmography of the actress was replenished with the movie Sorority Row. The plot of this youth slasher is vaguely reminiscent of the 1997 movie I Know What You Did Last Summer. The film, which tells the story of a group of friends involved in a murder, also features a maniac in the robes of a graduate, stalking teenagers and sending young people threatening messages.

On the way to Los Angeles, their car breaks down, and the friends stop in a small town. There, Samantha begins to have dreams and images that warn her of the end of the world.

2012 was marked by the release of the movies The Devil's Carnival and Stash House. Two years later, the cinematic biography of Briana Evigan was replenished with the motion picture Step Up: All In. On it, the actress worked with Ryan Guzman. Besides, Briana got the role of Tanya in the movie Puncture Wounds (A Certain Justice).

In February 2016, the world premiere of the drama ToY took place. In the motion picture, which centers on the story of two lost souls who found each other in the exciting environment of Las Vegas, Briana got into the character of an artist from a wealthy family.

The young talented girl discovers other sides of her sexuality after meeting prostitute Kat (Kerry Norton). She faces a difficult choice, either to admit it to herself, her parents, and the whole world, that she is attracted to women, or to keep living a lie.

In the same year, the actress starred in the movie directed by Kim Rocco Shields Love Is All You Need?. The dramatic story immerses the viewer in a world in which only same-sex love is possible. Here the relationship between a man and a woman is considered forbidden, and people who dare to go against nature are attacked by society.

The first story is devoted to the love of Jude and journalist Ryan. Having sincere feelings for each other, they can not be together. Trying to overcome severe social barriers, the main characters decide that, no matter what, they will keep their love alive.

Tired of hiding the relationship from others, the guy and the girl expose themselves, showing everyone that their love is stronger than any prohibitions. However, society did not appreciate the efforts of young people. Surrounding people hunted lovers, bringing them to a state of complete despair.

The second story is about a girl Emily, living precisely the same life as all the other peers. Everything changes the moment she suddenly falls in love with Ian. The guy reciprocates. Everything goes smoothly until Emily's sister Paula finds out about their affair.

Evigan never talked much about relationships with men. Despite the efforts of the actress not to make her private life public, noisy journalists have always managed to find out the hottest and scandalous details about the communication of the actress with men outside the set.

So, from 2008 to the end of 2009, Briana went out with a member of the Wicker band, Max Nash. A couple of months after the separation, the young lady found solace in the arms of Patrick Flueger. This American actor gained popularity thanks to the role of Shawn Farrell in the sci-fi television series The 4400. However, this relationship did not lead the lovers to the altar, ending not in a wedding, but a breakup.

In 2017, the charismatic actress met a guy named Danny. The only thing that is known about Briana Evigan's boyfriend is that he is not related to show business and is not a media personality.

Speaking to the media, Evigan admitted that although they do not plan to marry anytime soon, Danny often jokingly refers to Briana as his wife. The actress responds to the young man, in the same way, addressing him as her husband.

Briana Evigan has a net worth of $8 million. In May 2017, the movie The Good Nanny was released on television. In the movie, Briana tried on the image of nanny Spencer Pratt, who, after a couple of months of searching for a job, found a suitable option. Spencer will learn that the seemingly sweet, good-natured couple actually has more than one skeleton in the closet.

It is known that the famous actress appeared in the action movie River Runs Red, on which she worked for a long time. The movie is devoted to the theme of violence, justice, and revenge.

In addition to filming, Evigan is also involved in charity, regularly visiting developing countries. In July, the artist was the host of the evening Dancing for Africa. The money raised at the event is sent to the fund for helping children living in famine.

Despite a busy work schedule, the star of the Step Up movie series does not forget about her fans. On Instagram, Briana Evigan, who has a height of 5 feet 41 inches and who weighs 119 pounds, regularly posts personal photos and vacation pictures from the summer of 2019. Besides, anyone can easily find information related to the creative biography of Briana Evigan online. Fans want to discover Briana Evigan’s diet and workout routine.