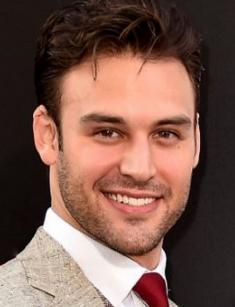 As a native Texan, Ryan Guzman confirms the opinion that jokes do not take any chances with such guys. This means not only his “deadly” weapon corresponds to the perfect athletic body: 6 feet tall (183 cm) and weighs 61 kg, his golden smile, and sexual half-closed eyes. Before acting career, the young man developed a passion for mixed martial arts and baseball.

One never knows where to meet your best half. Ray Guzman had to move from Mexico to the USA to find his future blonde-haired and blue-eyed wife named Lisa. There Ryan Anthony Guzman, the first son of the Guzmans, was born September 21, 1987 in Abilene. Later his younger brother Steven was born.

“Unfortunately, I do not look like Latino. People always call me a white man, but I am very proud of my biological inheritance. I honor my Mexican origins. Latinos are very passionate and well-meaning, I will always remember who I am and where I from”, - such statement the actor said about his forefathers.

By the way, in addition to Mexican, there is German, French, Swedish, English and Dutch blood in his veins. When he was eight, the family relocated to Sacramento, where his mother had been born. As remembered by Ryan from his childhood, the family had a unique environment created by music, salsa, and joy.

Guzman graduated from West Campus High School in the year 2005 and later attended Sierra College, where he started to play baseball. The teenager dreamed of being in the leading American League and becoming the irreplaceable player of Yankees team. Unfortunately, the dream was crushed by his shoulder injury, and he could no longer play the game.

Guzman was a lucky man because he successfully picked up his first black belt in Tae Kwon Do at the age of eleven years. Ryan also became a professional Mixed Martial Arts fighter. Later he even moved to Los Angeles, but there was an unexpected twist – the modeling world.

After half a year, Ryan Guzman started as a model for Calvin Klein Underwear Ad. Later he worked together with Gillette and Reebok. Ryan had to fend off the fellow-fighters' jokes, but they, realizing that this scored the opposite sex, radically changed their opinions and questioned about how to become a model. In the future, the actor does not exclude that he may return to the elite sport.

Through commercial work, an interest in acting began to arise for Guzman. He started taking acting classes and hired Search Manager Jobs. He got an opportunity to work in the fourth installment in the Step Up film series, Step Up Revolution in 2012. At that time, he also worked in the television series Cameras.

After two years, he again cast as Sean in Step Up: All In with co-starring choreographer Briana Evigan. Besides, the actor performed by himself all dancing moves without any professional experience.

As Guzman said, the past of the sport helped him to cope with that task. He worked in his first television comedy film Ladies' Man: A Made Movie about the life hacks how to escape the "friend zone." The next actor's work was 9-episode of TV series Pretty Little Liars and Heroes Reborn.

"What I like most in an acting career that the role is never established there. You can be a fireman or a baseball player; you can be who you want to be in this world. I think I found my calling”, - he once shared in an interview.

In winter 2016, Hollywood shuddered again with the news of the breakup of a beautiful couple. In this case, the name of model and actress, Melanie Iglesias and actor Ryan Guzman had also come to the limelight. They had been in a relationship for three years.

The reason behind their break up was not out as both of them had not revealed about it. However, it was said that the cause was a business move. He was starring opposite JLO in the movie The Boy Next Door, so rumors told that Ryan had an affair with Jennifer Lopez. Nevertheless, after their break up, the two unfollowed each other in social networking.

In autumn 2018, Guzman announced that he is expecting his first child with longtime girlfriend, Chrysti Ane, who is an actress and fitness model. On 11th September, the couple didn’t know the baby’s gender and chose considering Mateo or Genevieve as possible baby names. And on 25th September, it revealed to be a boy.

The man does not hold back enthusiastic emotions and posts on his Instagram page the happy pictures, accompanied by touching words:

“With so many things to be thankful for in 2018 THIS tops them all. This is the brightest my future has ever looked, and it just keeps looking better & better. So THANK YOU to the love of my life Chrysti and my soon to arrive son for giving me something I've always wanted”.

In addition to baseball and martial arts, where the actor’s idol is Anderson Silva, preference is also given to football. Ryan’s favorite kinds of music are R&B and jazz. Top three acting colleagues, with whom the celebrity would like to work, - Tom Hardy, Christian Bale, and Russell Crowe.

In autumn 2018, the action film Armed was premiered, where Guzman played a leading role of firefighter Eddie. The same year, he shot in the second season of procedural drama TV series 9-1-1 that followed the lives of Los Angeles first responders: police officers, paramedics, firefighters, and dispatchers.

At the beginning of December, the action film Backtrace was released starring Ryan Guzman and Sylvester Stallone. Russian premiere was on January 24, 2019.

As for social networks, numerous fans, or rather female fans, can find Ryan Guzman on Twitter and Facebook.