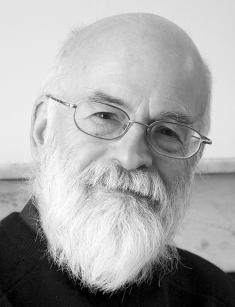 It is difficult to surprise the modern reader because it seems that everything has already been said and everything has already been written. For example, almost every year there appear new writers who, impressed by the books of John Tolkien and Roger Zelazny, plunge into the fantasy world of science fiction. Pages of their works are full of fictional witches, magic spells, elves, dwarves, and other supernatural things and creatures. However, not all writers describing the magical worlds got the gift of fame.

The Englishman Terry Pratchett is one of those authors, whose books lie on the shelves of avid fans of fiction. He not only introduced the mysterious Discworld for book lovers, but also brought satire and sarcasm into his works, as well as deep, but subtle and unobtrusive philosophy. Bookworms know this author by such novels as Equal Rites (1987), Reaper Man (1991), Maskerade (1995), and other notable works.

Terry Pratchett was born on April 28, 1948. Writer's homeland is Beaconsfield, a market town, located in the ceremonial county of Buckinghamshire in South East England. There is little information about Terry's parents; it is known that the boy was raised as the only child in the family of David and Eileen Pratchett.

Terry started showing love for reading from early childhood. Instead of playing with friends, he leafed through books and was fond of studying the Universe. The boy collected space flashcards he found in the packages of one famous English tea brand.

Young Pratchett wanted, like Galileo Galilei to spend his life looking into a telescope, but he lacked the necessary maths knowledge. Terry was a true humanities-minded person (even though he studied in a math graduate school).

Then the young man became interested in science fiction; he engaged in reading Arthur Conan Doyle and Herbert George Wells, who created The Time Machine (1895). It is also known that after graduating from high school, Terry did not continue his education. Instead of applying to university, Pratchett, having been given his parents' permission, started on his journey and got employed at a local newspaper called Bucks Free Press.

Terry used inkwell and pen for the first time at the age of thirteen. Then the boy presented his first short story called the Hades Business to his friends and closest ones. The young man came up with an original plot revolving around a man named Crucible who found a devil in his apartment in a cloud of sulphuric smoke.

Later the debut work of Terry was published in a school newspaper and printed out in Science Fantasy magazine. By the way, The Hades Business brought the boy his first fee - the publishing house paid the young talent £14. The next work, Night Dweller, saw the light of day only in 1965.

In the same 1965, Terry became an official reporter after completing a training course for journalists and continued developing his writing skills in the office of Bucks Free Press. The young man imagined about eighty short stories for children which he published in the newspaper under the pen name Uncle Jim.

It is worth noting that the first characters of Pratchett meet in the book The Carpet People (1971). By the way, this book was published thanks to Peter Bander van Duren, the chief editor of the publishing house whom Terry interviewed. The journalist mentioned that he wrote a novel entitled The Carpet People, Peter agreed to give this work a chance, and then said that Pratchett had a unique talent for sure.

Then Terry became the author of two more science fiction novels: he composed The Dark Side of the Sun (1976) and Strata (1981). The writer admitted that he came up with the ideas for these novels during dark winter evenings when he had nothing better to do.

In 1982, Terry Pratchett hit a rough patch. Because the young man had few sales, the New English Library publishing house decided to stop working together with the author. Fortunately, Terry did not give up and never doubted his talent, continuing to work hard. It is worth saying that later Pratchett, according to some reports, became the best-selling writer in the UK.

Terry Pratchett received recognition and fame. He also got a multi-million army of fans with the help of Diane Pearson, who organized a six-episode series on BBC Radio in the program called Woman's Hour. The action in the books of the Discworld series takes place on a fictional planet which is shaped like a disk. It is interesting, that Terry did not rely on the laws of Albert Einstein, Sir Isaac Newton, and Leibniz, but created his own physics.

In his stories, there are eight colors in the rainbow, the speed of light is low, and magic is not a concept of fantasy, but something ordinary and down-to-earth. The cycle is divided into several sub-cycles, and the main characters are Rincewind, witches of Lancre, Death, Moist von Lipwig, and other characters.

Mythical creatures inhabit the Discworld. Flipping through Terry's books, the reader meets trolls, vampires, elves and even bloodthirsty zombies. Pratchett described the magic of witches of Lancre quite interestingly. They produce fire by looking at a log, the log starts feeling embarrassed, and eventually, it burns with shame.

The second work of Terry from this series was a book called The Light Fantastic, published in 1986. The plot revolves around the wizard-dropout Rincewind, who knows only one spell from the Octavo book, but he does not remember it. Pratchett did not endow the main character with positive qualities, so the attention of the readers turned to a coward-magician who started getting into trouble.

In 1987, the writer's creative biography was supplemented by the fourth book in the series – Mort, which turned out to be a bestseller. Terry told the story of a young man, who had nothing to do on his father's farm. So the guy became an apprentice, and his mentor was Death itself. However, the skeleton in a black hoodie decided to take a day off, so the opportunity to take people to the other world was given to Mort.

By the way, few people know that the science fiction writer helped Neil Gaiman to become a famous writer. The author of American Gods showed him drafts of his debut work and Terry was so impressed by the attempts of the aspiring writer that he suggested working together. This is how the book Good Omens (1990), written by Gaiman and Terry Pratchett was released.

The plot of Good Omens revolves around an angel and a demon trying to prevent Apocalypse. The lord of darkness and the messenger of light decide that Apocalypse would not lead to anything good regardless of the outcome of the battle. So angel and demon start taking part in the upbringing of Antichrist, who in any case should not lean towards one of the sides.

The book received an excellent critical review, and some critics noted that Pratchett made a more significant contribution to this book than Gaiman.

In life, Terry Pratchett was not only a man with a bright smile but also an exemplary family guy, married to Lyn Purves. In this marriage, the couple had an only child, Rhianna Pratchett, who is engaged in journalism and writing scripts for video games.

It is also known that Terry adored tailed animals, which were of worship in Ancient Egypt. Pratchett even became the author of the comic book The Unadulterated Cat (1989). It is a kind of a guide-book written on behalf of a fictional organization fighting for "Real Cats," that is, mongrel, disobedient and moody.

Terry Pratchett had a net worth of $40 million.

In 2007, the media leaked information that Terry Pratchett was suffering from a rare form of Alzheimer's disease (at an early stage). In 2009, it became known that Terry thought about voluntary euthanasia and planned to go to Switzerland to make use of the legal practice of intentionally ending a life to relieve pain and suffering. The paradox was that Pratchett often smiled and imbued his books with humor, but repeatedly spoke about suicide.

In 2012, Terry's health began to decline. It was difficult for this talented person to write and read, but to distract himself from the futility of being, he continued to work on novels. He would often dictate sentences to his friend (sometimes he used special speech recognition programs).

The sudden death saved the genius of literature from the terrible sin condemned by religions. Terry died of illness on March 12, 2015. It is noteworthy that in the last minutes of his life Pratchett managed to write a significant but concise tweet – "The End." After the writer's death, his grieving fans came up with a legend that a character from Terry's books, Death, came for the writer himself.

"It is well known that a vital ingredient of success is not knowing that what you're attempting can't be done. A person ignorant of the possibility of failure can be a half-brick in the path of the bicycle of history."

"Human beings make life so interesting. Do you know that in a universe, so full of wonders, they have managed to invent boredom." (Death)

"Hate is just love with its back turned."

“He said that there was death and taxes, and taxes was worse, because at least death didn’t happen to you every year.” (Reaper Man)

"Chaos is found in greatest abundance wherever order is being sought. It always defeats order, because it is better organized."