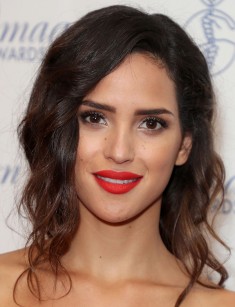 Actress Adria Arjona has become a Hollywood star quickly. At the beginning of an acting career, Adria got a role in the second season of True Detective, which was appreciated by critics and viewers. The talented actress of Guatemala Puerto Rican descent won viewers’ hearts showing a brilliant acting and charming smile. But the actress reached the peak of fame when she played the role of Dorothy Gale in the series Emerald City.

Adria Arjona was born on April 25, 1992, in Puerto Rico. After the birth, the family moved to the capital of Mexico, Mexico City, where Adria grew up and studied until she was twelve. Since childhood, the girl traveled with the family and got acquainted with the off-stage life of artists.

Her father is a famous Latin American musician, Ricardo Arjona. He often took his daughter on tours. Adria shared memories about this period of her life with Interview Magazine:

"Sometimes I had breakfast in Guatemala and went to bed in Mexico.»

When the daughter was 12 years old, the family moved to Miami. There Adria enrolled in high school. At that time, she already dreamed of an acting career. Father's occupation has also influenced the decision. Since childhood, the girl was surrounded by celebrities and was destined to connect her life with creativity. According to the actress, she received an excellent education at home, listening to classical music and reading poems by Pablo Neruda.

At the age of 18, Adria moved to New York City to become a theater actress. There she studied acting at the Lee Strasberg Theatre and Film Institute for three months. The life in New York was a serious test, but it made Adria strong. Later, the actress said in an interview with People magazine:

"I have never considered myself at home in Miami, or in Mexico City. The only place where I felt so was New York City. I have lived here for five years, and I love this place more than anything on earth. "

Nowadays Adria Arjona lives in Los Angeles. Nevertheless, she says kind words about New York City, a city that has always remained in her heart.

After moving to New York City, Adria Arjona improved acting skills and looked for a job. It was her only goal. In 2012, the aspiring actress got a role in the short film Loss. In 2014, Adria played bit parts in two detective series Unforgettable and Person of Interest. At the same time, the series True Detective premiered, and Arjona became its fan.

When the actress watched the first season, she said the manager that she would play in this series. Adria was going to participate in any season of the project. Neither the manager nor the actress believed in success, but a miracle happened. The young woman came to the audition for another project, and the casting director liked her and took the actress to the casting for True Detective.

"It got on my nerves because it was my dream. I did not even know how to prepare for the auditions. I decided to keep it simple and be my own self. I think that Nic [Nic Pizzolatto] liked it. I do not know!" - Adria Arjona shares her memories with Esquire magazine.

Her partners on the set were famous and talented actors Colin Farrell, Taylor Kitsch, Rachel McAdams. It was a serious test to play with such renowned actors, but Adria says that when "you are surrounded by such wonderful people, you cannot go wrong."

The actress says that it was comfortable to work with Nic Pizzolatto. The director has created a special atmosphere on the set, where the cast and crew trusted each other's talent. During filming Adria felt as if she played on the theater stage. The girl imagined that the actors participated in a play that was videotaped.

Adria Arjona starred in the series with pleasure, but there were difficult situations, for example, the scene where heroine Emily seduces Paul Woodrugh (Taylor Kitsch). The actress admitted that it was hard to remain sexual and relaxed during the sex scenes when the whole crew was watching the process on the set. Adria found an ingenious way out and said:

After filming in True Detective, the actress was offered a leading role in the TV series Emerald City, which was based on the Oz book series written by L. Frank Baum. At first, Adria refused to audition because she feared to fail. Dorothy with Hispanic appearance was a risk, but the actress was cast and became modern and grown-up Dorothy Gale.

The actress was perfect for the role of the famous fairy-tale heroine. Adria’s childhood and life prepared her for the role of Dorothy. The actress as well as the heroine of fairy tales spent most of her childhood traveling and searching for a home. During her trips, Adria saw other cultures and learned to appreciate the customs and traditions of others, accept them as they were. During the filming of the series the actress felt a strong connection with her character:

"When Dorothy comes in the fairy world, she experiences the same thing that I did when I went to a large New York filled with mad and insane energy. The places are similar. Now I even think that New York might have scared me no less than the country of Oz did. I as well as Dorothy tried to find myself, understand what I want to do, and develop in the right direction.

Viewers saw the series Emerald City in 2017, and Adria Arjona became very famous. Now fans recognize the young woman in cafes and the street; photos and interviews of the renowned actress appear in Interview, People, Esquire Magazines and on their covers.

Adria Arjona becomes reserved when journalists ask her about personal life. The actress tells about the professional experience, shooting and working impressions with pleasure. It is a positive and objective evaluation of her work as well as the achievements of her colleagues. Adria is friendly, keeps her distance from controversial issues, and does not speak about her personal life.

The actress shared her thoughts about men with GQ magazine. Adria told how she held herself out being with men:

"When I like someone, I pretend to be cool and inaccessible. I pretend that I’m not interested in the person. But men do not understand such behavior, and it scares them. They just need to learn to read minds. "

The actress knows how to be mysterious and inaccessible and wishes her fans to be enigmatic:

"The mystery is always great!".

Nowadays fans are looking forward to watching the second part of the sci-fi thriller Pacific Rim Uprising, where the actress will play the role of Jules, one of the title characters in the film. It will premiere worldwide on March 22, 2018.

Adria also plays in the new film Good Omens, the American-British series, which is scheduled to premiere in 2019. 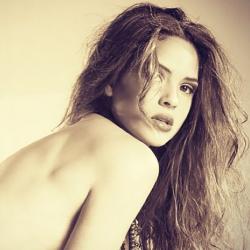