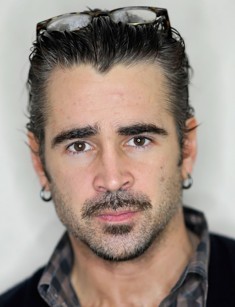 The films of these genres such as Minority Report, Phone Booth, Miami Vice, The Recruit and others brought popularity to the actor. Colin attracts the attention of the audience, and especially women, not only with an actor's talent but also with a handsome appearance. Farrell has been included more than once in the list of “most beautiful people” formed by popular mass media.

Colin James Farrell was born in Dublin on the last day of May 1976 in a family of Catholics. The father of the future actor was a professional football player and played in the Shamrock Rovers football club, and mother was a housewife and looked after four children.

When Colin was 10 years old, the family moved to Castleknock. The children were brought up in the Catholic tradition, but from the early years, Colin began to show his rebellious nature.

The child was so restless that he suffered from insomnia from the age of 12. He missed lessons at school, spent days on the streets and in bars, where he was arrested for smoking marijuana, and often involved in fights. So, Colin was expelled from school after one of such fights, but this time with a school teacher. He was only 17 years old. This event pushed him to go with friends on a year traveling to Australia which was the warmest event of the actor’s youth.

After returning home Colin Farrell enrolled at the Actor's Studio of the Gaiety School of Acting on his brother’s Eamon advise, where he studied for a short while. However, after getting on the acting path, he continued studying getting a minor role in the Disappearance of Finbar. Then he played in the low-budget films Drinking Crude and Falling for a Dancer, which tells about a girl who fell pregnant to one guy, but she had to marry another man to clear her reputation. He also played in advertising, but it did not bring the actor any pleasure or fame.

For the first time fortune smiled on him when he got a role of an autistic boy in the play at the Donmar Warehouse in London. The theater was little known, but Farrell was lucky to play with Kevin Spacey, who noticed the novice actor. Kevin thought of him as a talented actor and offered the producers to consider Colin for a small role in a new film Ordinary Decent Criminal.

Simultaneously Colin starred in the psychological thriller The War Zone in 1999. It was the directorial debut of Tim Roth, with Tilda Swinton and Ray Winstone in the main roles. Colin Farrell played in the television series. The actor appeared in the series Midsomer Murders and Love in the 21st Century and starred in seven episodes of the popular in Ireland series Ballykissangel about the life of a young English priest. Colin also worked on the series David Copperfield, but the scenes with the actor were not included in the project as they were cut during the editing.

In 2000, Ordinary Decent Criminal was released on the screen. Despite the fact that the film failed at the box office and received negative reviews of critics, but the movie was the way on the big screen for a little-known actor.

The same year, Farrell starred in Joel Schumacher's anti-war film Tigerland, realistically playing the obstinate and independent character of the uncompromising Roland Bozz. Farrell received awards from the Boston Society of Film Critics and the London Film Critics' Circle for this role.

The next step in the career of the actor was joint action with Bruce Willis in the drama Hart's War in 2001. He was awarded by the Shanghai International Film Festival for this role.

In 2002 Colin Farrell was nominated for the Empire Award for the acclaim of critics. The same year he played in Steven Spielberg’s fantastic film Minority Report on the role of agent Danny Witwer. Another striking role of 2002 was Stu Shepard, who was held up at gunpoint by a maniacal sniper, in the film Phone Booth by Joel Schumacher. After starring in these films, the actor was recognized as the “breakthrough of 2003 according to the MTV Movie Awards”.

2003 was the most fruitful year in terms of acting in large projects. Colin participated in five projects such as the spy thriller The Recruit, the film Daredevil, the film biography Veronica Guerin, the action movie S. W. A. T. and the tragicomedy Intermission, the latter was well received by authoritative critics and got several awards and nominations.

A tall man (his height is 178) with an expressive face attracted the attention not only film critics. The same year, Colin was called one of the most beautiful people in the world, he was included in the list of the 50 stars in People magazine, and the Company magazine has ranked him the sixth sexiest men.

The actor was nominated for the IFTA for her role in the screen version of the novel A Home at the End of the World by Michael Cunningham in 2004, where Farrell played Bobby Marlow. At the same time, he received his first lead role in a big-budget Oliver Stone’s movie Alexander. Colin Farrell played the role of Alexander the Great. The role of his close friend and according to some versions, the lover of Alexander Hephaestion was played by Jared Leto. These shootings caused gossips that the actors had relationships but they were not proved by the facts.

Despite the huge budget and high expectations, the film could only recoup the costs. This film has also become a personal failure for Colin due to the Golden Raspberry Awards nomination.

In the period from 2006 to 2010, Colin starred in arthouse movie In Bruges, the film about the war Triage, Ondine, London Boulevard, The Way Back, but they were not very successful projects. In 2006 the actor got the Golden Globe for the film In Bruges in the Best Performance by an Actor in a Motion Picture – Comedy or Musical category. In 2010 he was awarded by Irish Film & Television Academy as the best actor for the film Ondine.

The release of the criminal comedy Horrible Bosses in 2011 became more commercially successful. The same year, Farrell participated in another lucrative and popular project, where the actor also played a major negative role. It was a remake of the 1985 film Fright Night. Then Colin Farrell began to act every year in the leading roles in smashing hits.

In 2012, Colin played the main role in the fantastic action movie Total Recall, which is a free adaptation of the story by Philip K. Dick "We Can Remember It for You Wholesale” and in a remake of the cult blockbuster of the 1990's with Arnold Schwarzenegger and Sharon Stone. The film tells about the future, where people can implant themselves any memories. Doug Quaid decides to do this procedure, but as a result, he does not understand whether he was implanted with the wrong memories or accidentally discovered the past, which they tried to hide from him.

The same year, the actor played in the crime comedy Seven Psychopaths. The film received good box office earnings, but it was not memorable and the audience soon forgot it. In 2013, Colin appeared in the action movie Dead Man Down.

In 2014, the actor played a young thief who traveled through time and space with the help of a magic horse and subsequently discovered his supernatural forces in the fantasy melodrama Winter's Tale.

The year 2015 brought Farrell two main roles with a detective theme. Colin played a maniac who has supernatural powers in the thriller Solace. The same year the actor opened the world of serials. Colin Farrell got a positive role in the second season of the True Detective. In 2015, the actor again returned to the art house films and played in the futuristic fantasy The Lobster, which was invested by means of Great Britain, Ireland, Greece, France and the Netherlands.

Colin Farrell will forever have the fame of a rebel. He says about himself:

“I’m a simple Irish guy. I am what I am. And I treat people the way they deserve. I don’t care about statuses”.

In 2001, the actor married actress Amelia Warner. Although the marriage lasted only for a few months, Colin has a tattoo of Amelia's name on his ring finger. He has also tattoos on the left hand with the image of a cross and a Latin phrase.

While Colin was on the set of the film Alexander in 2003, he and his Canadian beautiful girlfriend Kim Bordenave became parents of the son James Padraig. Despite the birth of a child, the couple broke up, but Colin has publicly announced his fathership and said that he would provide for his son.

In 2006, the actor had an affair with Nicole Narain, whose relationship ended in a scandal. Farrell filed a lawsuit against the former lover for the fact that the girl posted the video of their sexual contact.

In 2007, the actor told the world that James Padraig has the rare Angelman syndrome, which causes slow intellectual development, seizures, and slurred speech. It became a headache in the life of an actor. Colin has forgotten his image of a rebel or a bad guy, he has given up going to parties and participating in scandals.

In 2009, Alicja Bachleda gave birth to his second son. Farrell met her on the set of Ondine in 2008. The boy was named Henry Tadeusz. In an interview, Colin called Henry “the gift that continues to give him joy as if he has still not fully unwrapped it”. The breakup of the couple was officially announced in 2010.

There are always rumors about the actor’s new girlfriends, but the actor has not dated anyone for the past few years, focusing on his career and bringing up the sons.

In March 2011, the media wrote about the serious relationship between Farrell and singer Rihanna. The press claimed that the actor introduced her to his children. But they officially denied these rumors. In the spring of 2016, the paparazzi photographed Farrell walking with a mysterious girl with a pretty and slightly Asian appearance. The mysterious stranger began to appear regularly next to the actor, but the journalists could not find out the name and status of the girl.

The premiere of the screen version of the book by Joanne Rowling Fantastic Beasts and Where to Find Them was in November 2016. Farrell played an ambiguous character there. Eddie Redmayne, Katherine Waterston, Daniel Fogler, Alison Sudol and Ezra Miller were actor’s partners on the set. The movie was simultaneously a prequel and spin-off of the popular film series Harry Potter.

The action of Fantastic Beasts takes place in the same magical universe as the adventures of Harry Potter, but much earlier, in the 1920’s of the 20th century. The main hero, the awkward young guy Newt Scamander, travels to New York in search of magical animals. According to books about Harry Potter, children study the books by Newt in magical schools. The film is full of similar references to the popular series, but there are almost no already identified or uncovered by previous series characters in Fantastic Beasts.

In May 2017 there will be two premieres at the same time at the Cannes Film Festival, in which Colin Farrell has played the leading roles. The actor played the role of a surgeon in the dramatic thriller The Killing of a Sacred Deer. A few weeks later Colin Farrell and Nicole Kidman, with whom the actor starred in both films, began work on another film. It is the western The Beguiled, a screen version of the novel by Thomas Cullinan.

In 2017, Colin Farrell was nominated for the Golden Globe for the film The Lobster in the category Best Performance by an Actor in a Motion Picture – Comedy or Musical.