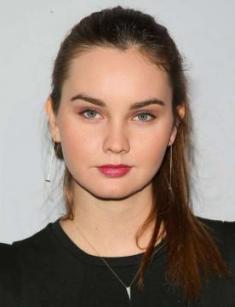 Liana Liberato had a creative and confident way, which began at school. By 2018, the young talented girl had 18 movies in her filmography (there were three tapes, which were in the process of creation), seven series and three music videos. Her photo was on the cover of The New York Times and the actress was awarded the Silver Hugo Award.

On August 20, 1995, George and Rhondelle had a daughter Liana Daine in Galveston, Texas. The parents were the primary mentors for girls when she was a child. Nowadays, she continues to listen to their opinion. Her mother supported the girl in her career as an actress.

"My father and I are very close. We are very similar to each other. He's honest with me and I trust his judgment. I believe my mother too," Liana admitted once in an interview.

She got resounding names from her great-grandfather from Genoa. By the way, she also has Czech, French, English and Irish roots.

Liana had a craving for art from an early age and she was in the musical theater when she was three years old. She was in the list of actors from Galveston: The Musical at the age of 7 and she was soon on Broadway in the production of Guys and Dolls. In addition to participating in performances, the future star loved to play sports. She preferred those types of games, where there is a ball: football and softball.

In 2005, Liberato went to visit relatives in Los Angeles. George and Rhondelle made a fateful decision again and gave the child to the children's acting camp during this trip. A Hollywood recruitment agent visited this camp and he invited her to audition when he noted her talent.

She performed an excerpt from Alice’s Adventures in Wonderland brilliantly next day that she received a small role in a serial tape. But there are different opinions about what movie she starred. Some people say that she got a role in The Inside, others say that it was Cold Case, other people claimed that it was CSI: Miami.

Liberato received the offer to star in The Last Sin Eater and Safe Haven after the movie debut two years later. And then she took part in the filming of the cult House, M.D. She started her modeling career with the advertising of a network of fashion stores for the whole Seppala family, which was declared bankrupt in 2017 and she was a performer at the same time.

The TV star was very famous in the homeland when she had the role of Annie Cameron in the crime thriller Trust. It is a movie about the issues of the modern world, which was filmed by David Schwimmer (he played Ross in the series Friends). Roger Ebert and the Chicago International Film Festival approved Liana`s game. She was awarded for the first prize.

Liana was lucky enough to work with Nicole Kidman and Nicolas Сage in the drama Trespass and with Stephen King, Jennifer Connelly and the son of Arnold Schwarzenegger, Patrick in the comedy Stuck in Love.

The Best of Me is a melodrama of 2014, Liberato became famous all over the world thanks to work in this tape. Her colleague, Luke Bracey, commented:

They had only a professional relationship, despite the convincing transformation into two young lovers. Also, the celebrity was featured in three music videos for songs of Miley Cyrus, brothers Nat and Alex Wolff.

On October 25, 2018, Liana and her boyfriend, Tommy O'Brien congratulated each other on the third anniversary of their affair on their pages on "Instagram." The guy called his girlfriend his love and best friend in the world. And she put a photo with a comment of strong feelings. It touched her loyal fans. She had thousands of likes.

Tom tries his hand at acting too. He took part in a criminal and romantic video for the song of Justin Bieber, DJ Snake Let Me Love You and the short tape Nobody Knows Anything!, this movie is about a teenager, who is suspected of fratricide. Liana was involved in the filming too.

The celebrity prefers cooking and swimming. She admits that she is crazy about the pop singer Sean Mendes and Coldplay, her friends, strawberries and beautiful shoes, she refuses to use paper napkins and she is afraid of lizards. She also has her recipe for boredom: going to the pet store.

She said that her first date was a failure. The meeting took place in a pizzeria, where basil stuck in the teeth during a meal. Leonardo DiCaprio and David Schwimmer are among those five people, with whom she would like to have dinner.

2018 was fruitful for Liberato. She starred in such movies as Measure of a Man. It is a movie about the life of a teenager and the first season of the series Light as a Feather and Banana Split, which tells about the collision with the supernatural and To the Stars. Liberato has an estimated net worth of $3 million.

"Thank you, the actors and the team, for working so hard on this show. I love you. And now I can say with confidence that I have my first TV family" - she devoted such an enthusiastic and touching review to the participants of Light as a Feather.

The artist is an active user of Twitter and Instagram, where she often shares publications from movie presentations, travels and meetings with friends, personal life events. Besides, she puts photos of her favorite pet, as well as stylish clothes of advertised brands. She is 5,5 feet (170 cm) tall, weighs 125 lbs (57 kg) and she is slim, it allows her to be a model.

There is a place for beautiful photo shoots in a swimsuit in the bath or even naked but only from the back.