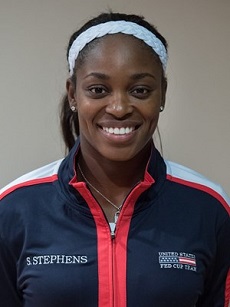 Sloane Stephens is an American professional tennis player. Sloane is one of the most exciting players on the world-wide scene who achieved a career-best ranking of No. 3 in the world in the summer of 2018 and became the 2017 US Open champion.

Stephens was born in Plantation, Florida, the U.S. Her parents were successful sportspersons. Her father, John Stephens, played American football in the NFL and represented the New England Patriots. Her mother, Sybil Smith, is considered the greatest swimmer in the history of Boston University. There is no wonder why their daughter has achieved staggering success in sports.

Sloane's parents divorced in 1994. A girl and her mother moved to Fresno, California. Stephens was 9 years old when she started playing tennis. This age is considered to be late by professionals. But despite the generally accepted norms, a girl amazed everyone with her talent and was immediately told to get serious about tennis and enter a prominent training institute outside of California.

In 2004, Stephens moved to Florida and eventually trained at both the Evert Tennis Academy and the Nick Saviano High Performance Tennis Academy.

The player expressed her gratitude to the family members who provided practical and emotional support to the future champion. Her mother encouraged Sloane since she was very young. Stephens also recalled her grandfather Noel Smith, who had a career of a doctor. She called him a hero for his essential contribution to her upbringing.

The future athlete took an example from such stars as Kim Clijsters, who congratulated Stephens in person after her 2017 US Open title. As a child, she admired the Williams sisters. Being a big fan of Serena, she kept a poster of a professional tennis player in her bedroom.

The junior career of Stephens began when she competed in low-level events on the ITF Junior Circuit in 2006 at the age of 13. In 2008, she showed her first breakthrough result at the US Open.

Stephens began the year 2009 by winning her first two tournaments, the Grade 1 USTA International Spring Championships and the Grade A Italian Open.

The year 2010 was the most successful in her junior career stage. The sportswoman partnered with Tímea Babos and together they took the doubles title at all three majors in which they participated.

In late 2007, her professional career started on the ITF Women's Circuit. During the summer of 2008, Stephens won her first professional title in doubles at a low-level ITF $10K event in Wichita alongside partner Christina McHale.

In the middle of 2009, Stephens participated in World TeamTennis as a member of the New York Buzz. In March 2010, Stephens qualified for the Indian Wells Open to make her WTA debut a week before turning 17. She defeated Lucie Hradecká in her first career main draw match before losing to the defending champion, Vera Zvonareva.

In 2011, the clay court season started. The tennis player won her first professional singles title at the Camparini Gioielli Cup, in Italy. At the French Open, she managed to get the qualification and won her Grand Slam title in singles. Sloane came out to be in the top 100 of the WTA rankings.

After she improved her ranking, the player was able to take part in WTA Tour-level events. At the French Open, she showed her best result at a Grand Slam tournament. Sloane appeared on a third round in her Wimbledon main draw debut, defeating Petra Cetkovská. After a series of successful games, Stephens entered the top 50 of the WTA rankings for the first time.

In 2013, during the Australian hard-court season, the player performed in an impressive game in which she defeated Serena Williams. There is no wonder that after the staggering victory she felt speechless giving comments in the post-match interview. She could only say that it was a lot of hard work to win in a game.

After giving way to world No. 1 Victoria Azarenka in the semi-final, Stephens reached a career-high ranking of No. 17.

In 2015, at the City Open, Stephens succeeded to win her first WTA title after she ended as the champion of the competition.

After the 2016 Rio Olympics, the tennis player suffered a left foot injury. She was advised by doctors to take a break from the sport and recover.

Sloane didn't play tennis for 11 months until 2017. She came back for Wimbledon, and the year 2017 was full of struggles. She faced her first unexpected setback during the US Open in the second round, in a play against Dominika Cibulková. In the fourth round, she won Julia Görges and moved on to her first US Open quarterfinal. After the victory over Anastasija Sevastova and then Madison Keys, Sloane became the winner of first Grand Slam Singles Title at the US Open.

After a series of misfortunes, the tennis player still believed in herself. In March, 2018, Stephens returned to form and won the Miami Open, her first Premier Mandatory title. She finished runner-up at the Canadian Open to Simona Halep, her second high-level Premier final of the year.

In 2018, the player was unable to defend her title at the US Open, losing to Anastasija Sevastova.

For the second straight year, Stephens began the Asian hard court season with multiple losses. However, unlike the previous year, she managed to win two matches on the continent at the China Open. In the round robin stage during her first WTA Finals in Singapore, the player overtook her group of Naomi Osaka, Kiki Bertens, and Angelique Kerber and moved forward to the knockout stage. After losing the first eight games of the match against Karolína Plíšková, she composed herself and won the match in three sets. The athlete finished the season ranked No. 6 in the world.

At the beginning of 2019, the player lost two of her first three matches in Sydney. At the Australian Open, Stephens defeated Taylor Townsend in the first round. At the next three tournaments, she played in the early hard-court season, but suffered several losses. She failed to defend her title at the Miami Open, falling to Tatjana Maria. Stephens reached her first quarterfinal of the season in her first clay-court tournament in Charleston, but lost to her good friend Madison Keys. It was her first loss against the American player.

Stephens managed to reach the semifinals in Madrid, losing to eventual winner Kiki Bertens, but was beaten in the second round of the Italian Open by Johanna Konta.

She then defeated 2016 French Open champion Garbiñe Muguruza in the fourth round, but in the last match she conceded to Konta in the quarterfinals.

In May 2019, she began to train with Sven Groeneveld, former coach of Maria Sharapova, Ana Ivanovic, Monica Seles, and many others.

Stephens is described as a powerful player. She confidently stands up behind the baseline. Her biggest strength is her speed around the court.

Many experts noted her excellent hand-eye coordination, one of her main merits in the game.

Despite her defensive play, Stephens sometimes prefers to stay passive on the court waiting for her opponents to lose points. Throughout the career, the athlete showed a great example of how she copes with losses and failures.

The famous tennis player had two serious relationships. In 2013, Stephens met Jack Sock, tennis player and Olympic Gold Medalist, who became her boyfriend. The two were together until 2014.

In 2017, Sloane began dating American soccer player Jozy Altidore. According to the latest news the couple got engaged in April, 2019.

Stephens actively participates in charity. She collaborated with Soles4Souls, a charity that donates new and used shoes to poor children. She also started the Sloane Stephens Foundation, which she runs with her mother, and her uncle Ronald Smith. They help to build tennis courts and set up after-school tennis programs for underserved students.

In 2018, the tennis star signed a new endorsement deal with Nike, after closing her long-standing partnership with Under Armour, an American company that manufactures sportswear.

During her junior career the player reached a career-high ITF junior ranking of world No. 5 and won three out of four Grand Slam girls' doubles titles in 2010.

At the 2013 Australian Open, Sloane got high scores with a semifinal run defeating No. 3 Serena Williams. At the end of that year 2015, she rose to No. 11. In the first half of 2016, she returned to a high level and won three WTA titles.

2017 was Sloane’s most successful year of her tennis career. The tennis player won 5 Singles titles and the first Major title – the 2017 US Open.

She was also awarded WTA Comeback Player of the Year for her successful season. In 2018, Stephens continued her success by winning her first Premier Mandatory title at the Miami Open.