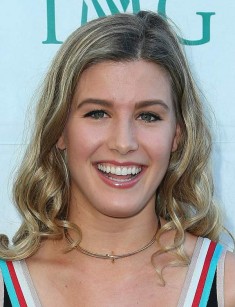 The media and fans shower Eugenie Bouchard in their attention: she is one of the most popular tennis players in social networks. Her hot photos appear on her Instagram page and covers of glossy magazines. However, the young woman has not been included in the top 100 tennis players since 2014. She does not like to shake hands with her opponents before a match: in her opinion, it is not sincere.

Eugenie and her sister Beatrice were born in Montreal in February 1994 into the family of a banker Michel Bouchard. The mother, Julie Leclair, brought up the children: the twins Eugenie and Beatrice, the son William, and two other boys whose names are unknown.

Before she entered the elite Study School in Westmount, Bouchard learned how to play tennis. Eugenie played in her first tournament at eight. The next year, she discovered her talent: the nine-year-old athlete defeated 12-year-old rivals to get to competitions in France.

Later on, the Canadian met the British athlete Laura Robson. Thanks to her mother’s recommendation, Eugenia moved to Florida to the Lauderdale academy where the American coach Nick Saviano worked; Saviano was the coach of the former top tennis player Sloane Stephens.

To support his daughter, the father founded a company and attracted investors for 10% of future income on condition Eugenie became a professional.

Michel Bouchard tried to gain the tax exemption and considered the money spent on his daughter’s career the business investment. However, the court did not confirm that; besides, the girl was under the legal age at that moment and could not give permission to manage her income.

At 15, Eugenie came back to Montreal and joined the national training center Tennis Canada.

Roger Federer who was Eugenie’s favorite tennis player motivated the young woman to develop her sports career. When Bouchard won the junior Wimbledon, the famous athlete asked the champion about her rating. Bouchard had nothing to about: she was lagging in the third hundred. However, Roger said his position was similar when he won Wimbledon.

In 2013, the athlete’s rating increased by 86 which brought her the 114th position in the world. The victory in Britain made her number 58. The legendary tennis player Martina Navratilova called Bouchard a potential Grand Slam champion.

The same year, Eugenie met Angelique Kerber at the US Open. The loss was not a big deal at that time: it was only the second Grand Slam tournament in Bouchard’s career. Before, she participated in Roland-Garros where Maria Sharapova surpassed her. Later on, Eugenie almost won Tournoi de Québec and reached the Toray Pan Pacific Open quarterfinals in Japan. For these accomplishments, the Women's Tennis Association named her the Newcomer of the Year.

The 2014 Australian Open semi-final was marked by Eugenie’s loss to the Chinese athlete Li Na, the future champion. However, this competition made Bouchard one of top 20 players.

The same year, she became the first Canadian athlete who reached the Grand Slam tournament final: it happened at Wimbledon. Before the decisive match against Petra Kvitová, Bouchard defeated Simona Halep and Andrea Petkovic. Although Bouchard lost in the final game, she became WTA number eight. A little earlier, Eugenie had won her first Nürnberger Versicherungscup title.

By the end of 2015, Eugenie Bouchard got down and became number 48 when she lost in the Australian Open and French Open; she also withdrew from the US Open. The next season, the athlete won at Hobart Internatiоnal, reached the final in Malaysia, and returned the title of the best Canadian tennis player. Moreover, she came back to her coach Saviano whom she had left in 2014.

Bouchard called 2017 the worst year in her career: the young woman lost in Acapulco, Indian Wells, Miami, and either quitted tournaments or failed to go beyond second or third rounds. In Madrid, Eugenie won and shook hands with Maria Sharapova whom she had called a liar because the Russian confessed she had taken doping. As the season finished, Bouchard changed her coach again.

Twitter users watched the development of Eugenie’s personal life: they learned how she met a student John Goehrke: they were watching a football match and fell into talking. Bouchard bet the young man a date when she made a mistake in predicting the match result.

Later, Bouchard posted several photos with the young man, but the relationship lasted for less than a year. Eugenie did not reveal the reasons for the break-up and just called John cute.

In a while, paparazzi discovered the tennis player was in love with a hockey player Jordan Caron. At that time, the young woman did not speak much about the details. People figured out the couple was dating by the man’s tattoo and similar photos on Bouchard’s and Caron’s social network pages.

In 2014, the young woman said she was attracted to Justin Bieber. It was not the best time for the popular singer: he was the object of people’s accusations because of his indulgent lifestyle and drug intake. In March 2015, Boucher played against the singer during her training at Indian Wells Masters; she complimented Justin’s serve.

In 2018, Eugenie Bouchard won the case against the United States Tennis Association. The athlete accused the USTA of negligence in preparing personnel facilities at the US Open: she slipped on the floor, fell, got a concussion, and had to pull out of competitions in China and Japan. By the court decision, the organizers paid 75% of the compensation demanded by Bouchard.

The Canadian did not participate in ITF competition in France because of health issues; as a result, her position lowered to 167. Besides, Bouchard withdrew from Roland-Garros and left the top 200 players. At Wimbledon 2018, she had to qualify for the first time and stop in the second round.

During the Ladies Championship Gstaad in Switzerland because of injury, although she had defeated Veronika Kudermetova and Viktorija Golubic.

In July of the same year, fans had another chance to enjoy Eugenie’s work: she had a hot photo session for the magazine Sports Illustrated. The blonde’s height is 178 cm., and her weight is 61 kg. She looks just like a professional model. As the athlete confessed, she had not much experience in such photo sessions and felt tense at first. Little by little, she learned how to relax. The woman’s friends and family welcomed her new hobby.

Before that, Eugenie appeared in Roger Cup ads together with Serena Williams and Victoria Azarenka. 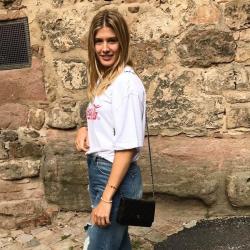